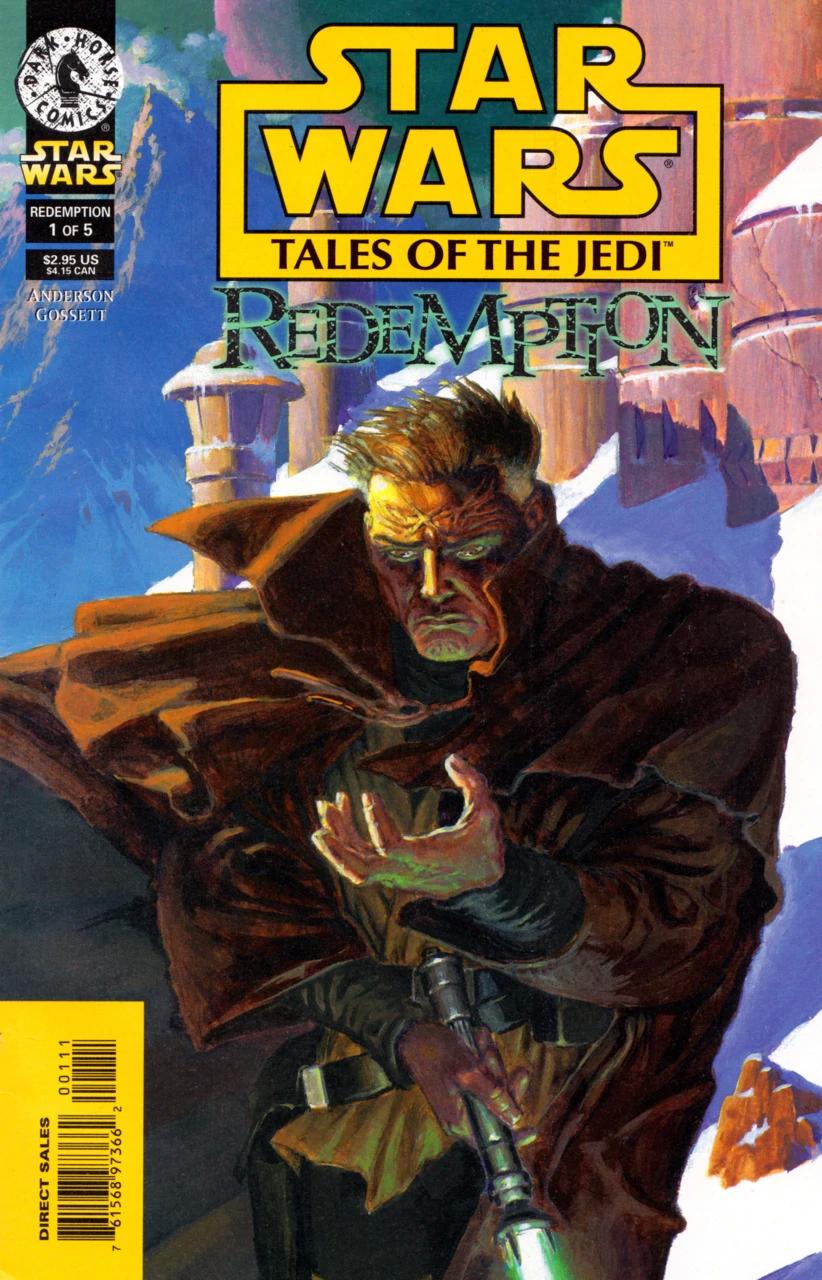 Redemption 1: A Gathering of Jedi

What is it ? : A freighter captain takes a passenger who is seeking solitude to Yavin IV, explaining how the ecosystem has bounced back in the 10 years since Exar Kun was destroyed in a firestorm. His passenger is revealed to be Ulic Quel-Droma, his Sith branding destroyed by a scar on his forehead, and the pilot, Hoggon, raves about the great events that once happened here, and how he wants to finish this quickly so he can travel to the great Jedi Convocation happening on Exis Station at the behest of Nomi Sunrider.
They land and walk among the Temples that the Massassi built for Kun, and the ghosts of events surround Ulic, reminders of what he did including his brother Cay crowd the quiet ruins, so he declares that Yavin IV isn't what he is looking for at all.
On the world of Ryloth, in the band between the freezing side of the world and the side burned by the sun, a tribe of Twi'leks search for a new home but a heat storm catches them in the open, and only the actions of Jedi Knight Tott Deneeta, deflects it saving their lives, but in the actions Doneeta's face is burned and scarred. The Twi'leks offer his somewhere to rest and heal, but he declares that he needs to leave to reach the Jedi Convocation.
At Exis Station Jedi Master Thon is met by Vima Sunrider, who he remarks has grown to be like her mother, and she excitedly begins to show him the station when Sylvar arrives, who Thon welcomes although admits concerns on how bitter she has become, and the two Jedi leave Vima bored and alone as the Convocation has already began.
Vima watches it begin, but wonders how if her mother is such a great Jedi as Thon claims she is, then why does she do nothing but talk, and she departs, witnessing the miners working from the station departing in transports to skim the surface of the star. This looks to be interesting, risky and exciting so she steals a transport and joins them, but her inexperience causes her ship to overshoot too near to the star and to begin breaking up, so she launches an escape pod. The escape pod is too close to the star, and none of the miners will risk rescuing her, but a grapple catches the pod, as Tott Doneeta arrives for the convocation and pulls her pod back to the station, and returns Vima into the worried arms of her mother.
Nomi scalds Vima for behaving rashly, telling her that a Jedi shouldn't act that way, but Vima responds that she could have gotten herself out of trouble if her mother had bothered to train her.
Hoggon and Ulic Quel-Droma arrive at Rhen Var, a world just emerging from an Ice Age, it's civilisation wiped away by the glaciers and it's cities empty and filled only with ice and snow. Hoggon hopes Ulic will like this place, as he thinks it suits Ulics personality, and Ulic tells him it will do nicely and he is satisfied.

High Points : A quiet start to this final story in The Tales of the Jedi, reintroducing us to the characters some 10 years later, Ulic is a wandered haunted by his past, looking for somewhere to just quietly fade away into obscurity and spend the rest of his days unrecognised. Nomi has become a powerful Jedi and their leader, but she has done this somewhat at the expense of her daughter, and there are so few Masters left that Vima has been left to her own devices, becoming an adventurous and somewhat wild teenager.
Sylvar hasn't lost the anger at the loss of her mate Crado and the actions of Exar Kun, although has become influential and respected by her people, as she is accompanied by a pair of Cathar guards, or possibly apprentices. Tott Doneeta is a hero, helping his people on their dangerous and hostile homeworld, rescuing Vima in the nick of time, and generally being a true Jedi.
Finally, Thon is Thon, powerful and wise, but remaining uninvolved in events, refusing to take charge, and standing back trying to guide events instead.

Low Points : Although the writers have wisely avoided a massive infodump, it would have been nice if we'd have had some more information on what happened to Ulic. Because it seriously seems as if he's been left to his own devices, as despite being a galactic criminal who waged war on the Republic, leading his Krath and Mandalorian forces on an attack on Coruscant itself, he is just wandering free looking for somewhere he can avoid being recognised or haunted by his past.
Has he just been released from captivity? Is that why he's just beginning this search now some 10 years later? What happened to him having his own ship, Cay's Dream, as we saw him piloting in the epilogue of The Sith War? Last time we saw him, he was trying to restore his connection to the Force, did he spend the last 10 years on that quest, but has now given up?
We're not told anything beyond "He is a Jedi, and yet no longer a Jedi...", which is poetic, if not particularly informative.

We're also not told anything more about the Krath, who remained undefeated and kind of forgotten about at the end of The Sith War, or Oss Wilum, who was also turned to the Dark Side during The Sith War, but returned to the light and helped convince Ulic to help against Exar Kun.

And in the intro crawl, we're told that the artefacts rescued from Ossus are now stored on Exis Station, but we see miners complaining that the station is now filled with Jedi getting in the way of the real work, which makes this seem like a recent event. Why are they storing Jedi Artefacts on a mining station? Why haven't they taken them to Coruscant? It'd make a lot of sense if we saw the beginnings of the Jedi Temple on Coruscant being a direct consequence of the destruction of Ossus.

So what do you really think ? : The weight of the events of The Sith War and Dark Lords of the Sith hang heavy over Redemption. The galaxy hasn't recovered yet, the Jedi order is still somewhat directionless, and seemingly less respected, which makes sense given that Exar Kun and Ulic Quel-Droma who waged war on the Republic were both fallen Jedi. Nomi is doing her best to bring the Jedi Order together and return it's respect, but her own training was brief, and the only Jedi Master who seems to remain is Thon, who was always unconventional at the best of times.

Ulic, whose Redemption would seem to be the obvious target of the title, himself remains broken, and more tortured by himself than punished by the Galaxy. While from a story point of view this is somewhat satisfying, to have the hero punish himself for his former actions, it doesn't make a lot of sense that the Republic and it's leadership would simply turn around and say, well he's punishing himself more than we could ever, so we'll just let him go.
It also kind of makes sense for Ulic to be punishing himself, as he's gotten away with it scot free as far as anyone else is concerned.

Final Words : Redemption has always felt like the Star Trek: TNG episode Family to me. Family deals with Captain Picard's self hatred after the events of Best of Both Worlds, where he was forced to become a Borg and his knowledge and tactical skills used to reign destruction on the Federation. Ulic Quel-Droma is in a similar position in this story, seemingly forgiven by the authorities, but unable to forgive or forget his own actions, whether he was forced or not.
And that is no bad thing, as Family is one of my favourite episodes, and the fact that it spends some time concentrating on the loss, shock and regret of a story rather than just moving on to the next adventure lifts both the original and the sequel to greater heights.
We'll see how Redemption lives up to my memories of it. . . .