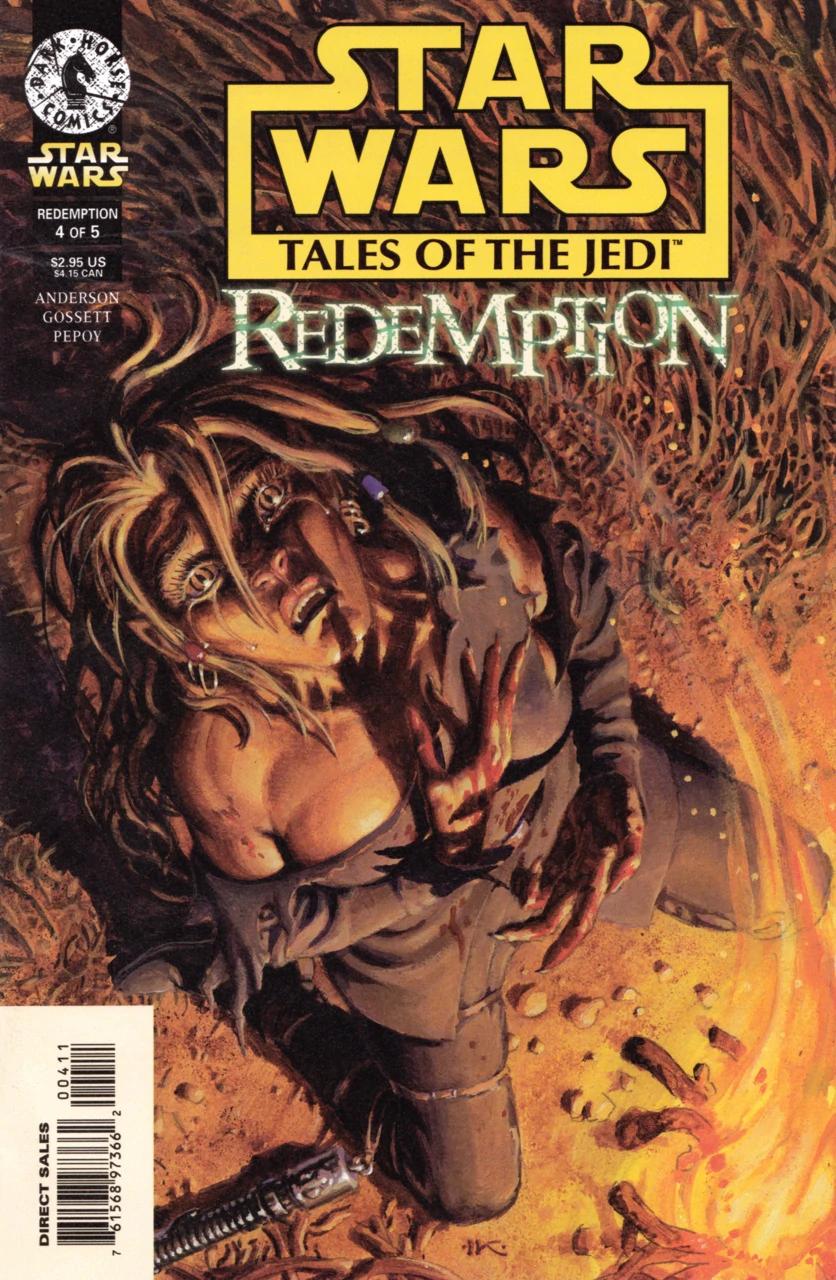 Redemption 4: The Trials of a Jedi

What is it ? : Sylvar is till on Cathar, attempting to cleanse herself through Bloodhunts, and she tracks and kills a horned creature, but once again the hunt brings her no relief from her anger. She senses that she is being tracked, but it is only a messenger that informs her that Vima Sunrider is missing, so she departs to aid Nomi immediately.
On Rhen Var, Vima is training with Ulic, who is impressed by the way she is learning everything he has to teach, and he guides her through constructing a Lightsaber using Crystals passed down from her father Andur, who died to stop them being stolen.The two begin sparring with their lightsabers, as although Ulic cannot feel the Force, he can still feel his blade.
On Exis station, Hoggon's claims to know where Ulic is, are being ignored, so he gives up trying to contact Nomi, instead looking for another Jedi who might be interested.
Ulic and Vima continue training, and Ulic tells her she has reached a level where he can teach no more as he is no longer a Jedi, but Vima tells him he is like an Artist who has lost his sight, and so therefore should take up sculpture, which gives Ulic an idea.
Nomi is contemplating her Lightsaber, a weapon she never wanted to use, and how she was forced down the path of becoming a Jedi after the death of Andur. She regrets not giving Vima the training she needed, but thinks that Ulic could teach her about the cost and sacrifice of being a Jedi. Sylvar arrives and the two embrace, but the two rapidly fall out as Nomi believes that Ulic couldn't harm Vima, but Sylvar reminds her that he is a war criminal responsible for countless deaths including that of her mate Crado. Sylvar tells Nomi she has always had a soft heart and mind, and she storms out only to encounter Hoggon who tells her that he knows where Ulic Quel-Droma is, offering her a ride on his starship.
On Rhen Var, Ulic and Vima have constructed scaffolding up an ice cliff, and the two begin creating sculptures in the ice using their lightsabers, Ulic honouring his master Arca Jeth by creating a giant image of his face, and Vima using her mothers hologram creates one of her father Andur.
Ulic is pleased they have honoured their memories, and Vima tells him that he has trained her as a Jedi Master even though he doesn't sense the Force, and he has the heart of a Jedi, but Ulic has difficulty believing her although wishes it was true.
On Exis Station, with the conclave over, the Jedi are departing, and Nomi hardened by Sylvars comments takes up her lightsaber to find Vima before she hopes that Ulic does too much harm. . . .

High Points : While we're racing towards the conflict at the end of the story, the heart of this issue is Ulic and Vima, as Ulic learns as much about what kind of person he is from Vima as she learns from him about being a Jedi. The two sculpting giant ice faces of those they honour is a lovely scene, and although it's only ice so not likely to last for long, it would have been nice to think of a cliff face somewhere in the Galaxy being like a space Mount Rushmore for visitors to encounter Andur and Arca Jeth and wonder who these two were.

I must also complement the artwork for a moment, all of it is brilliant, but I was especially taken by the way they've drawn Ulic through this issue especially. While the other Jedi don't look particularly older, Ulic is obviously aged from when we saw him during the Sith War. His hair has grey in it, and is in a shorter more practical style, and his face is lined. His Sith Brand long gone from his forehead and covered with a scar where it was removed.
He is also visibly melancholic, and his face filled with sadness, and even without the dialogue we can instantly tell this is a more mature, and more regretful version of the character we've now shared so many issues with.

Low Points : The continued ignoring of Hoggon is annoying, Nomi is looking for Vima and Ulic, and a man is outside her door saying that he knows where Ulic is, but she refuses to speak to him. It might have worked if we knew others were making the same claim, or he'd made similar outrageous claims in the past so we knew his credibility was lacking. But we're not told either of those things, and Nomi just almost as if she doesn't really want to know.

I'm also confused by what's going on with Sylvar on Cathar, she found out last issue that the Bloodhunt wasn't cleansing her of her anger, but she apparently has kept repeating Bloodhunts just in the hope that this time it might work. And Tott Doneeta who was helping her try to come to terms with her anger just seems to be gone. The Bloodhunt in this issue either feels unnecessary, or lacking in detail, as we could have either just jumped from the Bloodhunt last issue to Sylvar discovering that Vima is missing, or could have had where Tott has gone and Sylvars repeated attempts at cleansing herself given some context. But alas no, we get a middle ground which feels like clumsy story telling.

So what do you really think ? : Again I really enjoyed this issue, it's full of heart, and without the galaxy spanning battles, it's telling a tale of what happens after that, and how the characters come to terms with the effects of those battles.

Final Words : So, one more issue of Redemption, and indeed Tales of the Jedi to go. While the time period continues to be explored some what in The Knights of the Old Republic series of comics. Those are more based around the events of the two video games, and barely touch on the events of The Tales of the Jedi even though they are only set a few years afterwards, so while I may come back and deal with those later, I'm nearly done with this time period for now.