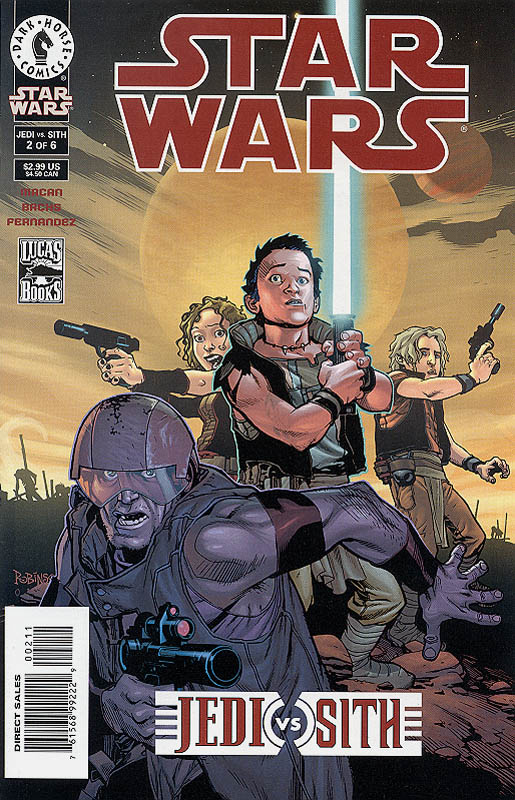 What is it ? : Torr Snapit's Starship has come down in the forests of Ruusan, and he Tomcat and Bug are stranded there, and they spot a group of Bouncers floating overhead. Tomcat asks Bug to use his MInd Trick to command them to come closer so they can capture and eat them. But Bug says it doesn't work, and Torr tells them it is because they are intelligent, giving the pair some food he has.
Elsewhere in the forests of Ruusan, the Sith Warriors ship arrives, and he finds some Bouncers around a fallen Sith, the fallen Sith identifies the warrior as Darth Bane, and tells him how the battle he fell in was a glorious way to die. But Bane tells him glory is for the living, and when the Sith calls for help, one Lord to another, Bane crushes the life out of him, putting his boot on his face and remarking that everyone calls themselves Lord now.
Tomcat, Bug and Torr Snapit are ambushed by a group of Sith Minions, and they fight, but Snapit refuses to use his lightsaber, explaining to Tomcat that he is not a Jedi because he likes the hum of a lightsaber, he's not a Jedi he likes being a Jedi, he's a Jedi because the Galaxy needs Jedi.
A group of Sith are gathering, and Lord Kaan enters, when one of the Sith refuses to rise for Kaan, asking if they are not all equals, Kaan agrees and orders them to stay seated. They begin to discuss plans for the next battle, but Darth Bane enters and rubbishes their plan, saying they are planning like Dirt Generals, not Sith Lords. If the forest hides their enemy, destroy the forest, telling Kaan he cannot believe he ever had the courage to poison him. Kaan denies it, but Bane tells him to not apologise for the one act in his life that Bane admires him for.
Fleeing from the Sith Minions, Bug, Tomcat and Torr reach a rope bridge over a chasm, and Torr orders the two across, igniting his lightsaber, and cutting the bridge once they are across, dropping himself and the Sith Minions down into the chasm. Tomcat decides that he wants Torr's Lightsaber, so begins climbing down into the chasm.
Outside of the meeting of the Sith, one of the Sith, Githany, brings Bane some food and he asks if it is poisoned once again, as it was herwho brought the poison to him before on her lips. She asks him if he knew then why did he take a second helping and a third, and he responds because a Dark Lord should be immune to poison, but it almost killed him, because the Dark Side is spread too thin, and should be contained in just one vessel. Or two she suggests, something he seemingly agrees with, something they'll have to deal with after the Jedi.
Tomcat finds Torr's body, taking his lightsaber, but Torr is barely alive, telling him that taking another mans saber isn't good, but Tomcat angrily ignores him, returning to Bug and telling him that there was no one down there. Suddenly a group of Sith warriors approach and Tomcat ignites the Lightsaber in defence, but the Sith are cut down by a hail of blaster fire, and they are met by a group of Jedi led by Kiel Charny, who explains they were sent to find out where Torr's ship had crashed. He recognises Torr's lightsaber, and asks Tomcat what happened to Torr?
Elsewhere, Rain is alive, saved from his fall from the Starship by some bouncers, who carry him on their soft furry back. . . .

High Points : Often Jedi Masters are unconventional and slightly strange, Yoda is a wizened tiny figure who speaks in riddles, Thon was a bestial creature who seemed at first glance little more than an animal. However the Jedi themselves have the image of brave Jedi Knights, warriors who fight evil and protect the Republic and Galaxy. Jedi vs Sith subverts the usual storyline where the student realises the Masters wisdom and unconventional ways, by having Tomcat find Torr's decisions and style to be unworthy of his personal image of a Jedi.
He rejects Torr's wisdom, and eventually takes his lightsaber thinking himself more worthy of wielding it rather than the Jedi Master who didn't even want it. Mistaking Torr's reluctance to fight for cowardice, and thereby judging him poorly compared to how he believes a Jedi Knight should act.

Now it's likely that Tomcat's actions will reflect poorly on him, and that his impulsiveness and anger will lead towards the Dark Side, but to me it looks as if it's a failure of the Jedi order once again.

Low Points : The entire premise of this series is to show how Darth Bane implemented the Rule of Two, where only a Sith Lord and an Apprentice should exist, but I already find myself questioning his logic.
Now I could completely understand if the Sith in the quest for glory and power kept turning upon themselves in a self defeating manner, and therefore Bane came to the decision that to avoid having many rivals and opponents, there should only be one Sith Lord, who gets replaced by his apprentice when they have sufficiently grown in power and eclipse their master.
However instead he seems to have decided that the Dark Side is a finite resource, and therefore the more Sith there are, the power is stretched between them all.
Now given that there was an entire Sith Empire, with an army of the Sith which managed to challenge the entire Republic, and the leader of it manifested powers of a scale which we don't see these Sith show at all, I question Banes conclusion.

So what do you really think ? : The story moves along quickly, feeding us the Bane storyline, along with the action as Tomcat, Torr and Bug attempt to reach the Jedi through the forest, which means the slower moving Bane storyline doesn't hold things up too much, instead feeding us the larger plot and the details of what's really going on as the Sith report on their knowledge of what the Jedi army is doing as well.
While I'm not a fan of what the story is doing, it's told extremely well with great pacing.

Final Words : I'm finding that I'm not enjoying reading through Jedi vs Sith as much as I remembered, Darth Bane and Tomcat are not characters I find it easy to get behind. Bane's pointless brutality doesn't impress compared to Naga Sadow's intelligence and planning, and Tomcat's annoyance at the Jedi while understandable, doesn't make him a particularly compelling protagonist. Which makes me think that Bug should be the hero, but while Bug is present, he's definitely not bringing anything particularly interesting to the story himself.
Maybe I'm forgetting something which makes the story far better as the issues go by.