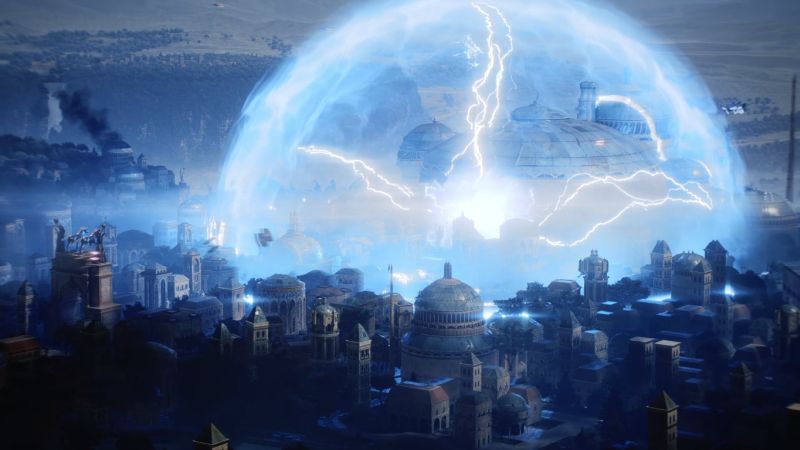 What is it ? : Del Meeko, Iden Versio and Shriv Suurgav land in Theed city and join up with Princess Leia who informs them of a plan to defend the city from the Empire, but power relays must be repaired to restore power to the palace for this plan to work. As the group fights their way through the city, they take part in fights as Rebels along with Naboo Security Forces battle with the incoming Imperial forces. del works on restoring each Relay as they reach them, while Iden helps defend him.
As they reach the palace, there is a massive assault going on, and they lead the defence of the palace steps against waves of stormtroopers, walkers and Tie Fighters until the power has built up and the trap is ready to spring.
Everyone rushes into the palace as a massive Ion charge is set off, disabling all technology throughout the city except those inside, and Walkers collapse, and Tie Fighters spiral down and crash, afterwards armed Rebel forces emerge to capture the Stormtroopers who now have no functional weapons.
Leia speaks to Iden, and tells her that after watching her fight she knows that this means more to them that running away, and Iden tells her that they've realised they were fighting for the wrong side all along. Leia tells her that people like Iden give the galaxy hope, and hope is why they'll triumph over the Empire, welcoming them to the New Republic.

High Points : I really like the concept of the Ion Pulse weapon in Theed, where the Naboo, worried about another Droid invasion, especially during the Clone Wars, built the Ion Pulse to disable any such army.
The Rebels use it on the much more technologically dependent Empire, taking out their walkers and air support.
It's a really solid idea, and makes a lot of sense for the fairly pacifist Naboo to build a defensive weapon after the Trade Federation invasion in The Phantom Menace.

Low Points : Apart from some good story telling and a solid central premise, the level is a bit grindy as you just face wave after wave of enemy in a series of arenas made up of squares and plazas across Theed city, and while it looks lovely, there's nothing too exciting in the gameplay.

So what do you really think ? : A solid level if a little uninteresting, although the last fight on the steps of the palace does manage to feel like a desperate battle for your life, as you stand against the oncoming hordes of Imperial forces.

Final Words : Nothing new in the gameplay of this level, but a fun implementation of what's gone on before.