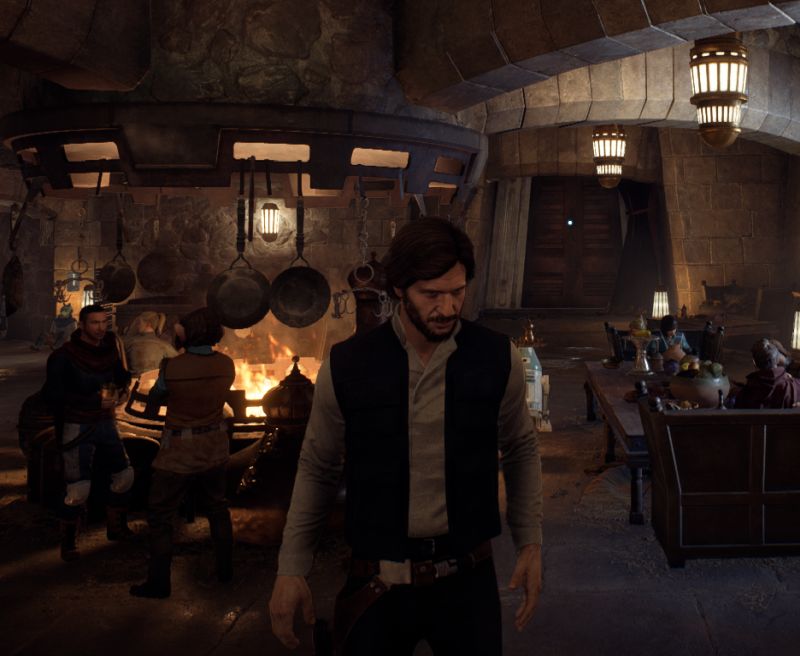 What is it ? : Some months later, Iden is now clad in a Rebel insignia emblazoned top, and is contacted by Princess Leia who asks her to find one of their generals, Han Solo who has gone missing on a mission to Takodana.
In Maz Kinata's cantina on Takodana, you take control of a bearded Han Solo, who is speaking to Maz, telling her he is looking for an Imperial defector who can help them free the Wookiees on Kashyyyk. Han moves around the Cantina, picking up snippets of conversation and being given clues as to who they should speak to next, a bearded man, then an old man sitting alone, and so forth until he locates the contact who also needs to locate two stashes of data he has concealed on the planet.
Heading outside you discover the Empire has arrived, and at a power generator in the woods you need to fight them before you can locate your contacts stash of data. Moving onwards to a shrine, you need to clear out the Imperials there before claiming the second stash of data.
With both data and contact safe, you head back to the Millennium Falcon, you see two Imperial shuttles land, and you need to defend the Falcon from waves of Stormtroopers disembarking until two X-Wings turn up and destroy the shuttles, allowing you to board your ship and take off.
As the Falcon lifts free, an Imperial Arquitens Cruiser turns up and Maz Kinata scolds you over the comlink for bringing the Empire to her door, and with the X-Wings you battle Tie Fighters and the cruiser, sending it to its end in the lake beneath.
Han then contacts Leia to thank her for sending Versio to help.

High Points : So, Battlefront 2 has a detective level? Where you wander around Maz Kinata's cantina on Takodana following clues and trying to locate an Imperial defector?
That's something I definitely did not expect, and something I absolutely love.
Now it's not complex roleplaying here, with branching dialogue, just simply finding the next person and speaking to them to get the next clue, but it's surprisingly enjoyable, with snippets of conversation being heard as you move around the cantina building the world and setting the scene.
And even the fighting parts are really quite fun, as you move to different areas, having to clear them before you search for the data that your contact has left behind, and then take part in a desperate defence of the Millennium Falcon.
Then up into the skies piloting the Falcon itself, what more could you ask for from a Star Wars game level.

It's also really cool to be able to explore Maz Kinata's cantina, it's quite large and sprawling, and would make quite an interesting setting in an RPG, as the size of it makes sense that people would come from across the galaxy to make deals here, whereas in The Force Awakens you don't really see much of it at all, and it just seemed like a badly placed bar. Why would anyone travel to a cantina in the middle of a forest on an out of the way planet?

Low Points : I'm really not sure about Han's beard? No seriously, it just looks weird.
Apart from that, I've no real complaints about this level except for that it doesn't follow up on it.
We retrieve the Imperial Defector with data about liberating Kashyyyk, and then, that's it, we never see Kashyyyk, and we never see the contact or Han again. Why give us a new plot thread, and then not follow up on it.

So what do you really think ? : An enjoyable level, which is sadly quite short and then forgotten about, reducing it to an attempt to please fans by showing us Maz Kinata and Han Solo.

Final Words : To a certain degree, this level serves to show how Iden Versio has been working with the Rebellion, before we get back to the main plot some years after Endor. Just serving as a slightly fleshed out cut scene to fill us in on what she's been doing in the intervening years.