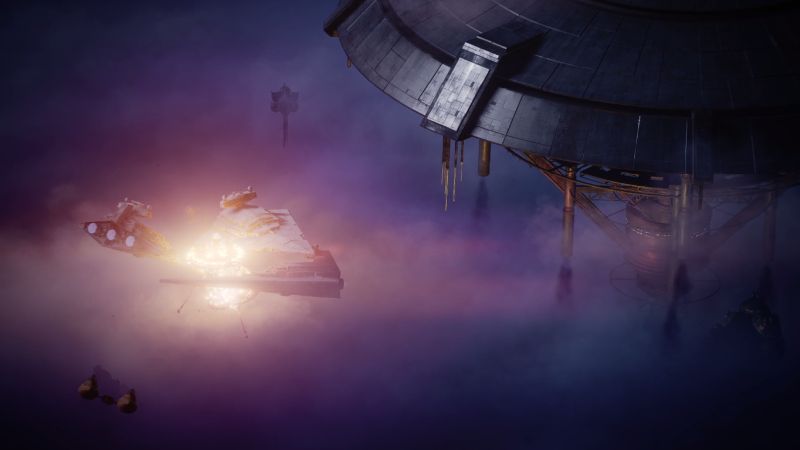 What is it ? : Iden discovers from the data from Ralsius Paldora that her father is running operations from the Anoat sector and Bespin and takes her partner Del Meeku with her. The two fly stealthily through the clouds of Bespin to Chinook Station and fight their way through the lower sections before disguising themselves as Stormtroopers and heading to the upper levels.
When they reach their target, they discover it is a trap set by their old comrade, Gideon Hask and alarms are set off forcing them to fight their way out. Unable to reach their X-Wings, they steal a Cloud Car, and take it to the refuelling station where three Star Destroyers are docked.
Before the Destroyers can undock, the pair fire on the fuel storage tanks, setting of a chain reaction which destroys the three massive vessels, but her father and Hask are able to escape.

High Points : An interesting enough level, using a familiar backdrop of Bespin, and while the gameplay is fairly variable across its length, there's no new tricks here so it doesn't stand out from the other levels.
However, it's showing off all the tricks it's done before, from a walking simulator type piece of storytelling, not only as you fly in stealthily, but also as you explore in disguise as Stormtroopers. We've got battles against walkers on Chinook Station, and a swap to starfighter combat as you steal the cloud car to use against the Empire

So what do you really think ? : It's solid enough, and and fun enough, but it's a bit of an unremarkable level, although it does quite nicely bring Hask back as a nemesis. But it would have been nice if the game could have shown us a new trick to keep us interested.

Final Words : I'm perhaps being a little harsh, as all the game is doing is using everything it's introduced before, and uses them competently. But it's just that this definitely isn't a level which comes to mind when I think of this game. I think of fighting through the streets of Naboo, exploring Vardos, or skirmishing through Asteroid fields, not of visiting Bespin.