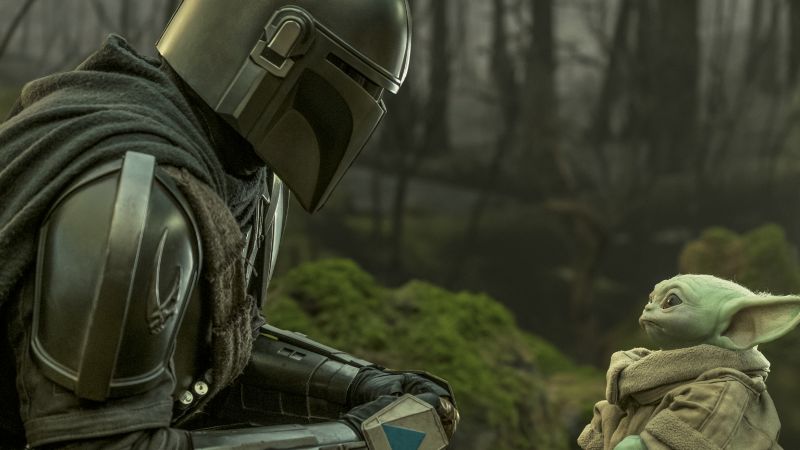 The Mandalorian: Chapter 13: The Jedi

What is it ? : On the world of Corvus guards on a settlement wall watch their men hunt someone through the mists around the settlement. The men are picked off one by one as a pair of two white lightsabers ignite, and take them out before switching off and disappearing into the mist again and again.
Eventually the Magistrate of the settlement comes to the wall, and watches as Ahsoka Tano emerges from the mist and calls for her surrender, but the Magistrate threatens to kill numerous people within the settlement unless Ahsoka leaves, giving her 24 hours to think about it.
The Mandalorian and The Child arrive at the settlement, and they allow him to enter once they discover he is a bounty hunter. The Magistrate offers him a spear made from solid beskar in exchange for him killing Ahsoka, and he leaves to search for her when they provide coordinates to her location.
Arriving at the coordinates, Ahsoka attacks thinking he is after her her lightsabers clashing against his resistant Beskar armour, but the Mandalorian calls out that he was sent by Bo Katan, and Ahsoka asks interestedly after the Child, and he says his mission is to deliver it to the Jedi.
Later, she telepathically communes with the Child, revealing it's true name is Grogu, and that he was raised by Jedi Masters in the temple. But was taken from the temple and hidden from The Empire for many years, and his memories of these years are dark and filled with fear.
She expresses concern about the fear and darkness within Grogu, telling the Mandalorian she has only met one of his species before, Master Yoda, but he asks her to test the Child.
Later again, she levitates a stone to the Child, asking him to return it using the Force, but he shows little interest. Having seen the relationship between the Mandalorian and The Child, she asks the Mandalorian to ask the Child to levitate the stone, and when he fails, she asks him to use their relationship.
Reaching into a pouch he brings out one of the knobs from the Razor Crests control panel which the Child plays with, and asks him to get it, and the Child quickly grabs it with the Force and takes it from the Mandalorians hand.
Ahsoka reluctantly agrees to train the Child if the Mandalorian helps her with her mission here on Corvus, to take out the Magistrate, and the Mandalorian agrees, telling her no one will expect a Jedi and a Mandalorian to be working together.
They work together and fight their way through the camp, and Ahsoka comes face to face with the Magistrate, her Lightsabers clashing against the Beskar spear, Ahsoka manages to get the upper hand and gets her lightsaber to the throat of the Magistrate, asking her where her master Admiral Thrawn is?
With the Magistrate defeated and the townspeople freed, the Mandalorian offers to get the Child to pass onto her, but as he sits slowly waking the sleeping child, Ahsoka comments that he is like a father to the child, telling him she cannot train the Child.
When he asks what is to be done, she tells him to take the Child to the Jedi Temple on Tython, where other Jedi may sense him and come to find him, although the Jedi are rare and almost extinct.

High Points : So we discover a bunch of the Child's history at the Jedi temple, and even his name Grogu.
Rosario Dawson is fantastic as Ahsoka, effortlessly stepping into the character, and her acting brings out some excellent character moments from the Mandalorian as well, as the affection he holds for the Child comes out, and it's clear how much he cares for little Grogu.

Low Points : While Rosario Dawson is a brilliant actress, and I adored seeing her in this (as I have in almost everything I've seen her in through the Marvel TV series, and back to Clerks 2), but the character feels a little off. While Ahsoka had noticeably aged and matured between Clone Wars and Rebels, carrying the weight of the fall of the Jedi Order on her shoulders, and almost everyone she knew having died.
And even through all that, Ahsoka was a person who cared, joining the Rebels crew when they were saving potential Jedi younglings being hunted by the Inquisitors. But here she doesn't seem to have that spark that Ahsoka always had, the heart which made her so appealing in the Clone Wars, and made her survivors guilt so palpable in Rebels.
But here she doesn't appear to be as wise or as caring as she seemed in Rebels, which might just be down to a different portrayal and could come out with time. But to be honest, I kind of don't want to see Ahsoka in this format again.

Another problem raises it's head once again in the Mandalorian, of everything pulling so hard from the past. Here we not only get Ahsoka, but we get mention of Admiral Thrawn, and we get HK-87 assassin droids (obviously the decedents of HK-47). It makes the universe feel small and everything so common. It's a trick I might use as a Gamesmaster to make the game world feel familiar, but I kind of expect better of this series.

The Mandalorian comments that no one expects a Mandalorian and a Jedi to work together. But this is Ahsoka Tano, who's been in recent enough contact with Mandalorians that Bo-Katan knew she was here, who battled in the Battle of Mandalore against Darth Maul, and who fought against the Empire alongside Sabine Wren against the Magistrates master Thrawn!
She's kind of known to work alongside Mandalorians.

And I don't often complain about the special effects in The Mandalorian, as usually they're quite excellent. But Ahsoka's Montrals (her head tails/horn things) were so obviously made from foam rubber. They didn't move at all, just laying there, and the creases that so often appear in foam rubber when it is flexed were obviously visible throughout Ahsoka's appearances in the episode. I've seen far better cosplayers than this costume made Rosario Dawson look.

So what do you really think ? : It's a bit of a disappointment after the last few episodes which have been awesome. And while it offered some interesting backstory, the action wasn't up to the standard we've seen, especially Ahsoka's lightsaber fighting which looked kind of poor in comparison to the movies or the Animated series (she looked heavy and slow in comparison to Anakin, or her fight with Maul just earlier this year (although the quality of that fight probably spoiled me)).

Final Words : Not every episode can be the best, and this was still pretty darn good, and only looks a bit of a disappointment when compared to the amazing quality that the Mandalorian normally shows. With 3 episodes left to this season, I'm interested to see where we go next.