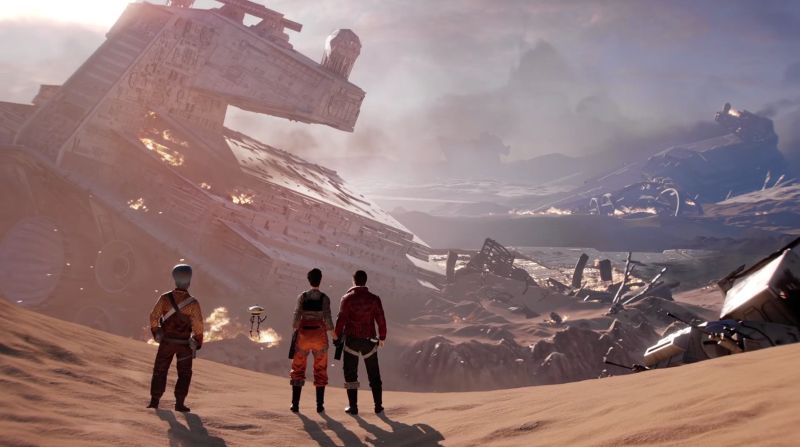 Mission 10: The Battle of Jakku & Mission 11: Until Ashes

What is it ? : Admiral Ackbar has ordered all New Republic forces to Jakku, where the Empire has gathered for the final battle of The Galactic Civil War. Iden and Shriv take to the skies in their X-Wings, while Del coordinates from the Corvus, and during the mission they must react to various Republic distress calls and orders.
Engaging the Empire in the skies over the desert skirmishing with Tie Fighters and Interceptors, they are ordered to a downed Star Destroyer which is still launching Tie Fighters from its hangars despite its crashed condition. They land their X-Wings and make their way by foot under the superstructure and into its hangar which they sabotage with explosives.
Returning to their X-Wings and the battle, they are then asked to help a squad of troops who are assaulting an Imperial Laboratory, but have been intercepted by Walkers. While helping the squad hold their ground against waves of Stormtroopers, Iden uses Macrobinoculars to coordinate with the Starhawk Unity which bombards the AT-AT's with blasts from its turbolasers.
They are then called back to the Corvus which is under attack by Tie Fighters led by their old comrade Gideon Hask and they skirmish, taking him out to crash into the desert below.
Iden spots her fathers Star Destroyer, the Eviscerator, and decides to go and try to save her father one final time, she cuts off communication with the Corvus and ends up crashing her X-Wing onto the upper surface of the Star Destroyer. She battles her way along its hull, and manages to locate a breach into the vessel, making her way to the bridge as the vessel shudders under repeated hits and explosions.
On the bridge of the Star Destroyer, Iden and her father speak, he tells her he intends to go down with his ship, he has devoted his life to the Empire and can scarcely believe it is being destroyed here. He tells her that she is strong and to find peace in her life. She races for the escape pods as the Star Destroyer shudders and plummets towards the planets surface, ejecting just before the vessel crashes.
Iden is knocked unconscious, but awakens as Shriv and Del arrives, and she embraces and kisses Del, the group then climbs an incline, giving them a view of the wreckage of the Imperial fleet scattered across the surface of Jakku.

High Points : This is an amazing level of the game as you are sent between different actions throughout the Battle of Jakku, it makes the battle feel expansive and that so much is going on. Rather than just one story, you glimpse so many stories going on at the same time, and it successfully sells you on the idea that if you wandered away from where you are directed, you'd find other missions to get involved with.
The way it mixes the macro with the micro as well is amazing, as you go from soaring over the battlefield, with the battle raging around you, to dropping onto the surface and taking place in skirmishes on foot, which really makes it feel as if this is a massive battle taking place across the planet, instead of just a few small combat instances made just for you.
Storyline wise as well this is an excellent level of the game, with you coming up against Hask and getting a chance to defeat him (if not kill him outright as we'll see in the expansion), and Iden gets a chance to redeem her relationship with her father. And it's not a particularly happy ending, he doesn't just come to see his daughters point of view and join the Republic, he dies barely able to comprehend how his life's work has all come to this devastating battle in which the Empire is being finally crushed. But it is satisfying, as he recognises his daughters success and skills, and wishes for her to find peace.

Low Points : There's no build up to The Battle of Jakku in the game, no feeling that the Galactic Civil War is coming to an end, you're just suddenly dumped into it. And while there's nice storyline elements within the level, the setting and events just feel abrupt as you've not helped the story get here with your previous actions, you've just arrived at the end.

Speaking of things coming about abruptly, the kiss between Del and Iden comes from nowhere. While in playing the game I'd wondered if the pair would end up together, and I always got the feeling that Del had a bit of a crush on Iden, following her out of the Empire more because he wanted her to be happy, rather than for any ideological reasons (although I admit that it's him that meets Luke and is the first to question the Empire).
But I'd definitely have liked some more clues that there was a relationship building between the two, and to be given some hints that the pair genuinely care about each other, especially given where we end up for the next few levels.

So what do you really think ? : This really feels like a climax to the game (although I bought it with the DLC, so the story isn't finished yet), the Empire is defeated, the bad guys beaten and the heroes triumphant.
Although in some ways it doesn't feel like you earned it. Games usually have you in the hero role, where everything revolves around you, but Battlefront makes you feel as if you're a vital, but nearly insignificant cog in a much larger machine which has led to victory. And while I really like that as a concept, it does feel somehow unsatisfying.

Final Words : So this feels like the end of the game, but we've got more to go, with a coda, and then the DLC to go, and the DLC definitely wraps up the story more conclusively. . . .