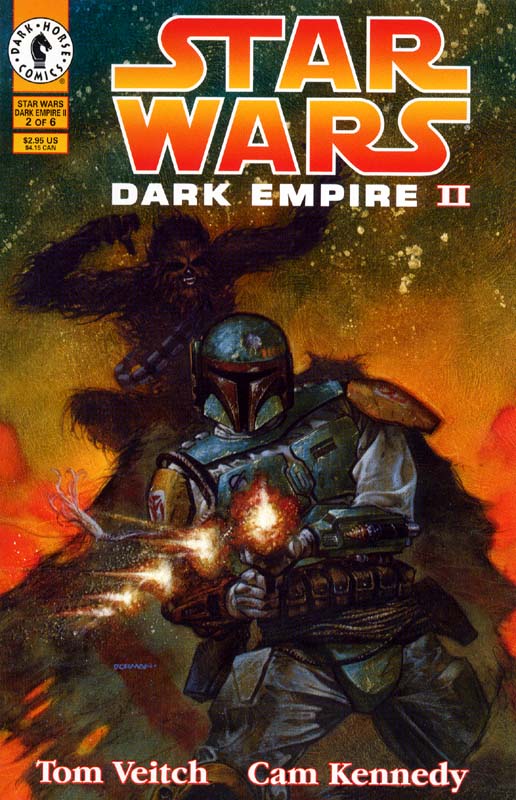 What is it ? : Han, Leia, Salla, Shug and Chewbacca are heading for New Alderaan but must first stop at Nar Shadaa to find Vima Da Boda. As they emerge from Hyperspace above the planet they see that there is an Imperial Star Destroyer in position over the city. Salla takes control of the Falcon, using her knowledge of the city to take the ship through the streets where they cannot be detected.
Meanwhile in the streets Boba Fett is being confronted by two Imperial Dark Side Warriors, who try to bully him into working for the Empire for free. As they force him to his knees with the Dark Side, he fires off all the weapons on his armour, creating a distraction and allowing him to slip away in Slave 1.
The Falcon arrives at Shug Ninx's repair facility which has been wrecked in his absence, and they see one of the mechanics, Warb, being interrogated by Dark Trooper Team Two. Han mans the guns and opens fire, taking out the Stormtroopers, but also hitting and destroying one of Shug's ships which remains in the facility. In the aftermath, Han and Leia head into the city to find Vima, and Shug is annoyed as the destroyed vessel was the one he intended to use to retrieve the Starlight Intruder from Byss,
Vima is living on the streets, and the two Dark Siders pass nearby, and sense the force from her, but she slips away using her knowledge of the streets as they get their Stormtroopers to open fire causing carnage.
As they search for Vima, asking in various drinking establishments, they are spotted by some Ganks, who work for the Hutts and want to collect the bounty on their heads, so a firefight begins. Eluding them, they return to the repair facility, but discover that Shug and Salla are gone, presumably captured by the Empire, a theory reinforced when they discover that Stormtroopers have boarded the Falcon. After despatching the Stormtroopers, one of the repair droids in the facility passes on a message from Shug and Salla that they have left the moon for good, and Han should look them up if he wants to abandon the Rebellion and make some money.
Taking the Falcon out through the secret escape tunnel, a massive section of a prototype Death Star, they discover Boba waiting for them in Slave 1, and to escape Han causes the two ships to collide, the tougher Falcon surviving with only damaged sensors, which Slave 1 careens out of control with a destroyed stabiliser.
Taking the Falcon into the lower sections of the city, Leia senses Vima and they track her down, but as they convince her to join them, they are discovered by Boba Fett, and in the melee that occurs, Chewbacca damages Boba's jet pack and he flies off smashing into the ceiling high above, and although they can hear him groaning, so is still alive, Chewbacca takes his helmet as a trophy.
As they finally try to leave Nar Shadda, they are grabbed by the tractor beams of the Star Destroyer, as the two Dark Siders have returned to it. Han dodges the Falcon under the Nar Shadda flight control tower, where his old friend Mako Spince has sold them out and is feeding the Empire tracking information on the Falcon, but the tractor beams pull the entire tower from it's foundations and it spears the Destroyer, causing it to crash into the city below as the Falcon slips away.

High Points : Here we're definitely getting a sequel to Part 4 of Dark Empire, with a return to Nar Shadaa and another return of Boba Fett, who we last saw crashing into the planetary shields of Byss. The city is well done, and appears wonderfully dingy, and Boba and Han both seem to be in their right place in the galaxy, somewhere which is definitely a hive of scum and villany.

Low Points : But despite how well the setting is laid out, there's still Dark Empires habit of turning everything up to 11, and we get an escape tunnel which just happens to be "a kilometers long chute which cuts through the heart of the city". Which begs the question, how did this smuggler manage to ship in a kilometers long section of what we're told was a prototype Death Star, and place it in the city without anyone noticing so he could use it as his secret escape tunnel?
And the fact that it's a section of a Prototype Death Star as well? Are those just sold on the scrap market, there's a massive backstory here we're not told. If Nar Shadaa was a scrap moon, where things are taken to be stripped down, then it might be explainable, but it's not, so a kilometers long chute just arrived one day, and no one asked any questions.

Boba's back, and goes out not once this time, but twice like a chump, not only crashing Slave 1, but also defeated once again by a malfunctioning Jet Pack. He's becoming almost a comedy character by this point, in his next appearance is he going to slip on a banana peel or the like, as it really couldn't get more embarrassing for him at this point.
It's also noteworthy that the Dark Side Adepts tell Fett that they know he was once a Stormtrooper, and claim to have proof he killed a superior officer. Now I don't know if this was part of what was once planned for Boba's backstory, and it can easily be retconned with a story about Boba going undercover as a Stormtrooper to get the bounty on some Imperial Officer. Or even the Adepts confusing Stormtrooper for Clonetrooper, but it appears from what we know now of Boba's clone ancestry, they're incorrect on both counts.

And my final moan, with everything turned up to 11, the Falcon can't just slip away past a Star Destroyer, but it has to cause the Star Destroyer to crash, speared by a building. Now the deaths of those aboard the Destroyer are forgivable, and the death of Mako Spince is forgivable, as he already betrayed Han in Dark Empire. But the Destroyer crashes onto the city below, and we see multiple skyscrapers demolished as it plows into the surface and explodes. Many thousands in the city below must perish in that disaster, all to allow the heros to slip away.

So what do you really think ? : It's just too reminiscent of Dark Empire 1 for me, whereas the first issue had managed to deal with characters making it far more interesting. We're back to mindless action and everything just made bigger for no reason.

Final Words : Well, with a return to Nar Shadaa (and therefore Dark Empire I) out of the way, perhaps Dark Empire II can become it's own thing once again as we move forward with the story.