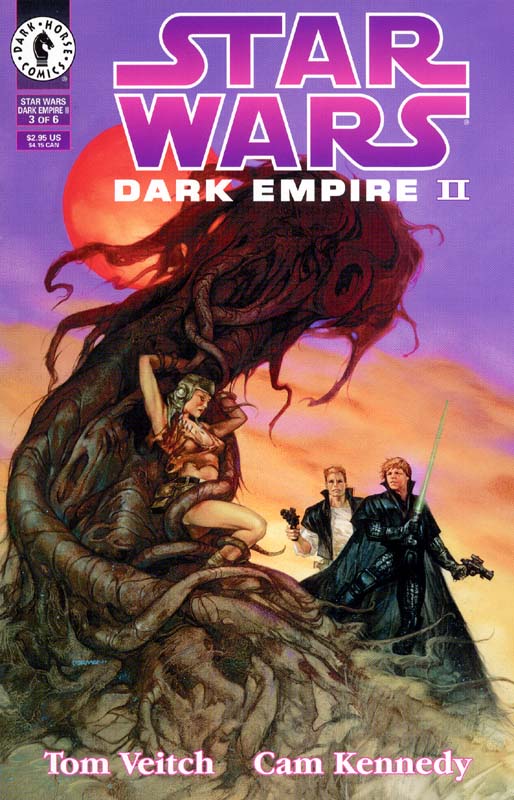 What is it ? : Shug Ninx and Salla Zend arrive at Byss in the Salvager Three and con their way past the security which has been increased since the Millennium Falcons previous visit. In orbit they spot the construction of a massive something they assume to be a new weapon and wonder if Palpatine has somehow managed to survive.
Meanwhile, a youthful Palpatine clone is meeting with Inquisitor Sedriss, who informs him of the death of Baddon and Zasm, the Dark Side Adepts killed on Nar Shadda last issue, and that a Probe Droid has detected Luke Skywalker and Kam Solusar on their way to Ossus. Palaptine commands him to capture their pair, or he will join the Adepts, in "the madness beyond death".
Luke and Kam land on Ossus, and are attacked by the Probe Droid that has been following them, and take a speeder out across the devastated surface of the planet, impressed and reminded of the power and status that the Jedi once held as they pass giant buildings and murals. They sense the force and discover two youths tied to a tree stump, and stop to free them, but cannot understand the ancient language they speak.
The other members of the tribe arrive, and their elder focuses the power of the tribe into an attack on Luke, who easily dismisses their untrained abilities, and the elder submits to Luke recognising him as a Jedi and embraces him.
Before anything else can happen, they spot an Imperial Hunter starship pass overhead, and it lands with Sedriss and another Dark Side Adept exit, also conjuring up the force in an attack. But again Luke manages to dismiss the attack, and the pair draw lightsabers and attack.
Kam fights and defeats the Dark Side Adept, and Luke forces Sedriss back, as the Inquisitor realises he is outmatched. He also realises that the people here are force sensitive and Luke is planning to train them as Jedi, so he grabs one and threatens her life, demanding that Luke let him take her to turn her to the Dark Side. But before either can act, the tree animates, revealing itself to be Odd Bnar, the Neti Jedi who changed into the tree form of his species life cycle to deny Exar Kun access to his treasures some 4000 years before during the events of The Tales of the Jedi: Dark Lords of the Sith.
Odd Bnar and Sedriss are consumed as the sides of the Force clash, and afterwards Luke's Jedi kinship with the tribe helps him identify them as the Ysanna, and they discover that not only has Bnar budded an offspring, but revealed his cache of Lightsabers, that the Ysanna take up, raising them alongside Luke and Kam.

High Points : I've always loved the Neti as a species, and seeing Odd Bnar again after he was seemingly destroyed back in Tales of the Jedi is fantastic, even if it is only a few frames before he is destroyed as he defeats Sedriss in a way he failed to beat Exar Kun, making his journey quite satisfying, even if it would have been nice to have a 4000 year old Jedi Master around (take that Yoda and your mere 700 years).

The Ysanna are also a cool addition, force users that use their abilities to guide their arrows to their targets, although it hints they're untrained, but also hints that Odd Bnar trained them, so a little confusion there. You would have thought that being trained by a 4000 year old Jedi who is from a time when there was an entire world dedicated to training Jedi would have been better than being trained by Luke who learned all he knows in a swamp. But maybe Bnar was limited in what he could do, being a tree and all.

Low Points : My major complaint about this issue is a personal one, which probably doesn't bother anyone else. But what happens to Odd Bnars offspring?
The Neti are a species which are mobile in their youth, as they search for fertile land to put their roots down into. Intelligent, they can spend decades as a lifeform similar to others in the galaxy before finally becoming immobile.
But from what appears to happen here, is that Luke, Kam and the Ysanna see the young Neti, think it's just a tree, and leave what is basically a helpless infant behind as they plunder Ossus for it's treasures and then leave.
Does the poor being grow up alone?, is he force sensitive like his parent?
Just because he's a plant based lifeform doesn't mean that the kid doesn't need love and care!

I also question the writing somewhat for being heavy on the exposition, when we first meet the Ysanna, the two youths tied to the tree are described as "Rayf, aged 15, and his sister Jem, aged 23", do we really need to know their names? And this continues with the vehicles, as Luke and Kam's speeder is "the x77 experiemental airspeeder", and their ship gets the full "Lukes new two-man ship, The Jedi Explorer, is designed to navigate uncharted hyperspace routes. It has a full complement of Laser and Ion Weapons, and a cargo bay that could hold a Bantha."
Now as someone who loves stating out Star Wars stuff, this is great information, but it does seem out of place, as usually the heroes just get in Luke's personal starship, or their airspeeder, and the details are irrelevant, as they are here, since the airspeeder and starship barely features for more than a couple of frames each.

So what do you really think ? : I really liked this issue, it's nice to see a location which was so important in The Tales of the Jedi, brought back into the more modern day of the Star Wars universe. The Ysanna are interesting, and it's cool to see Ood Bnar once again.

Final Words : So far this issue is the high point of Dark Empire for me, no massive war machines (although we do glimpse the Galaxy Gun being constructed), just a nicely written story about Luke and Kam contacting a lost tribe of Jedi, which have it's roots in other comics set 4000 years before, tying all of these tales together.