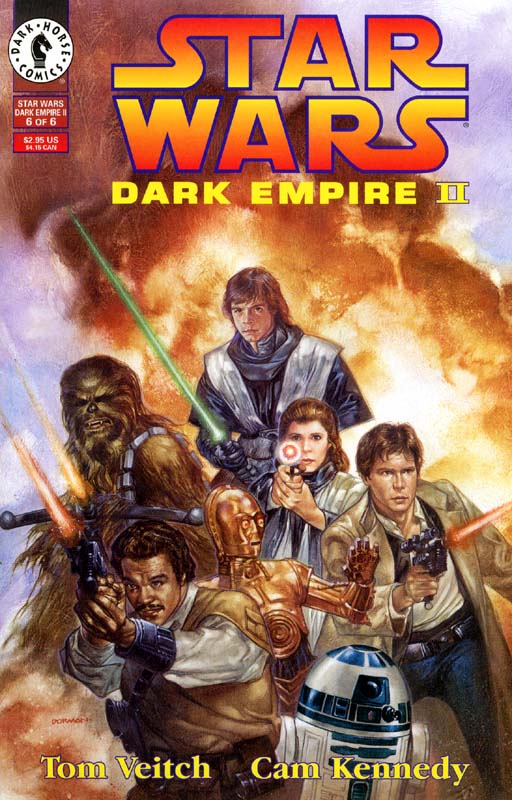 What is it ? : Han and Chewbacca are playing with Han's kids on New Alderaan, while Leia walks and talks to her old friend, and child carer, Winter. They've lost all contact with the Republic and radio channels are silent, Luke is overdue as is their normal supply run.
Empatojayos Brand warns them of an incoming ship, and Leia detects through the Force that it is piloted by Luke, who lands and informs them that Pinnacle Base has been destroyed along with all of the Republic Command.
Meanwhile at Darth Vaders castle on Vjun, the Emperor arrives as his Dark Jedi are now based here, they are interrogating the captain of the New Alderaan supply vessel, and manage to get the location of the world from him, so the Emperor orders them to go there and capture the Solo children. So seven Dark Siders depart on the mission aboard Howlrunner Starfighters as the Emperor is satisfied that the Jedi will finally be destroyed.
Back on New Alderaan, Empatojayos Brand is training the Ysanna, who are learning much faster than Luke ever did, as he had to unlearn his limits and accept that through the Force all things were possible, the Ysanna accept this by default. Luke discusses and studies the books he has brought from Ossus, while Han and Chewie depart in the Millennium Falcon to meet up with Lando and the team from the attack on Byss and bring them back.
Luke spends some time with Jem as the two become closer, and as Luke returns to his quarters later he mentions to his droid that his prosthetic hand given to him by the Emperor has problems and needs adjusted, before he falls into a deep sleep.
As he sleeps, assassin droids slip into his quarters, small spiderlike droids which pump him full of drugs, and he has visions of the Emperor. As he cries out in his sleep, Jem and Rayf rush in only to discover Dark Jedi breaking in, and they fight, Leia enters and defeats the two Dark Jedi here, but Jem is shot and drops wounded.
Vima Da Boda uses the Force to clean the poisons from Luke's system, while outside Kam Solusar, Empatojayos Brand, and Rayf face off against more of the Dark Jedi. As the Dark Jedi are beaten, they call in an armoured attack on the settlement, and one of them attempts to sneak off with the Solo children, but the Jedi manage to retrieve the kids. Rayf speaks to his sister as she passes away lying on the bed next to Luke, while outside Imperial AT-AT's can be seen approaching the base.
Pop up Turbolasers defend the base, but the heroes notice that these AT-AT's are equipped with new weapons, and watch as their ships, and much of the settlement explodes around them as it is hit with the AT-AT Turbolasers.
Overhead the Millennium Falcon returns along with the three vessels which fled Byss, and the combined fire from these ships, especially the Falcons new Lightning Cannon destroy the walkers, and all of the suvivors of New Alderaan board the ships which take them to Nespis Spaceport.
Here they meet with Admiral Ackbar and Mon Mothma, who reveal that the managed to evacuate Pinnacle Base before it was destroyed, although the Alliance is fragmented, but the meeting is cut short as Leia goes into labour with her child.
Luke and Kam study murals aboard the Nespis Spaceport, which depict the Sith War some 4000 years before, and Han enters telling them he is a father to a boy, which is wants to call Han junior, but Leia tells him that she wants their child to be named after her father, Anakin, which Han agrees to, thinking Anakin Solo sounds good.
This news gives Luke hope, that new Jedi will eventually drive the darkness back, and that the Emperor cannot resist the light of the Jedi. . . .

High Points : At a first read I thought the battle on New Alderann was chaotic and confused, but on rereading I realised that it all makes perfect sense, but is written to show the confused and chaotic nature of the fight, and I have to give credit to the writers for doing this. It's difficult to communicate the confusion of battle without just stating it, but here they manage to make everything seem as if it's happening at once, while you can actually go through it and see where every combatant is during the fight, and it's only because you're seeing it from the characters point of view that it seems confusing.

It's also great to see Empatojayos Brand acting as a Jedi Master, and the two Ysanna being students who outperform Luke due to their belief in the Force. Whereas Luke was introduced late to the Force, so didn't really believe everything which it could do, being forced to "unlearn what he has learned" as Yoda told him. The Ysanna were brought up with Force Users, and although the Ysanna powers aren't anywhere as powerful as the Jedi ones, it's all just things for the two of them to learn, not having to overcome a disbelief first.
While it would be easy to dismiss this as undeserved, two new Jedi who learn things faster than Luke did, even though he's supposed to be the most powerful Jedi in existence. It doesn't come across that way, Luke had more potential than them, but came to learning the Force late. But the Ysanna have always learned the force, so while they'll never be as powerful as Luke, they learn more easily.

Low Points : The coincidence of the Dark Jedi just happening to have captured the transport captain who supplies New Alderaan isn't explained, and is annoying. And I'm niggled by the fact that Sedriss, the Emperors most loyal Dark Jedi had a statue to Darth Vader built in their new Dark Jedi Academy, even though Vader killed the Emperor at Endor. Both these things could have used some explaining rather than just happening.

Jem gets killed off just to add some tragedy to Luke's life, which seems a little pointless unless they build on this by using his anger in Empires End.

But the main problem is that Dark Empire 2 doesn't have an ending, it just ends. While it mimics The Empires Strikes Back by having the Rebels lose their base, and suffer a defeat. The ending of the Empire Strikes Back was definitely the ending of that story, even if some plot threads remained to be dealt with.
But Dark Empire 2 only ends in the same way each issue ends. We're still in the middle of the story, the Galaxy Gun hasn't even been discovered by the Republic, the Dark Jedi are still around, Palpatine is still young and vital, none of the plot elements end here at all, everything is just waiting for Empires End to come along and tie it all up.

So what do you really think ? : Action wise it's pretty darn good, sticking at a character level which makes it more enjoyable, with none of the constant procession of bigger and more dangerous superweapons the other parts constantly seem to have (although the AT-AT's are upgraded ones).

Final Words : So Dark Empire 2 ends . . . kind of. Everything needs to be tied up in Empires End, the third part of the Dark Empire trilogy.