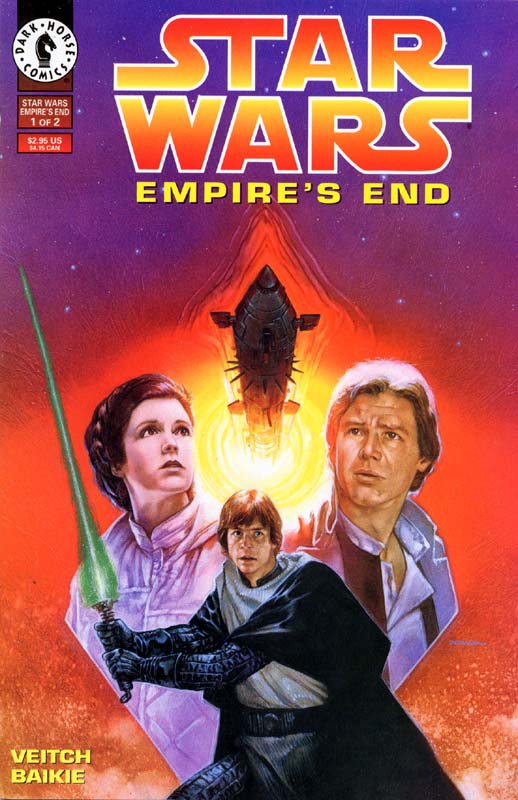 Empires End 1: Triumph of the Empire

What is it ? : On Ossus the Ysanna gather to reach out with the Force to discover what has happened to Luke and the two children of the tribe who went with him, and they sense that Jem has been killed. They also sense that thousands of Republic warriors are about to die at the hands of the Empire.
In space a troop transport ship carrying thousands of ships detects one of the projectiles from the Galaxy Gun emerging from hyperspace and it scrambles it's X-Wings in defence. The X-Wings are ineffective against the gigantic missle, and the transport explodes killing all aboard.
The Emperor watches from Byss, as planetary leaders fall in line and grovel at his feet to rejoin the Empire, but this angers Palpatine as their rebellion against him has only now ended due to fear of the Galaxy Gun. But this anger causes him to nearly collapse, and his doctors warn that the Dark Side is aging this clone more rapidly than others, , as news arrives that the Republic are using Nespis VII as their new headquarters and Palpatine swears to end the war once and for all.
At Nespis VII, the Millennium Falcon is being restored to normality as the Lightning Cannon is removed and it's Arakyd Missiles reinstalled. R2-D2 spots a worker installing a tracking beacon, and when confronts the worker after a short firefight, he tells them the Rebellion is doomed.
Alarms ring out as a Galaxy Gun Missile is detected emerging from Hyperspace and the Republic Vessels open fire with Ion Cannons to try to disable the missile, as there isn't time to evacuate everyone in time. The missile crashes into the station, but fails to detonate, and the Republic forces continue to evacuate although do disarm the missile first.
Palpatine is outraged that the Galaxy Gun has failed, blaming its creator, Umak Leth, who however blames the parts he received from Bonadan. A second missile is fired, which destroys the Nespis base, but the Republic fleet manages to escape in the nick of time. As Palpatine continues to rage at Umak Leth, his doctors warn that he must remain calm or the body he is in will die quickly and he has nowhere to go. Requiring strong Jedi genes to create new clones, he sends his forces to Ossus to harvest the Ysanna there, and seeks the children of Leia and Han as the purest form of bloodlines he can harvest, and he departs onboard his personal Eclipse Class Star Destroyer to search for Dark Side Secrets to allow him to survive.
The Rebel Fleet gathers in space as they attempt to decide the next step to take, and Luke suggests that Palpatine will want the relics on Ossus, so wouldn't destroy that world, so if the Republic makes its base there, they will be safe from the Galaxy Gun. And he sets off with Rayf and Kam to contact the Ysanna for permission, however as they arrive they spot an Imperial prison ship leaving with a number of the Ysanna aboard, including the tribal leader Ukko.
They follow the transports to Bast, where the prisoners have been taken to Darth Vaders castle which the Dark Jedi are using as an Academy, and by remotely controlling Kam's ship to crash into and burst open the hangar doors, the Jedi and Ysanna attack the base attempting to free the prisoners.
They beat the Dark Jedi, with the help of collapsing a statue of Darth Vader, and find the prisoners have been frozen in Carbonite, but blocks without any defreezing controls, and Luke pledges to be the one who will take Palpatine down once and for all. . . .

High Points : So we get back into the action without any waste of time, as essentially this is just Dark Empire II issue 7, rather than a new series at all. But I'm really struggling to find positive things to say about the story, although I must admit that the quality of the artwork has improved, or at least changed to a more Star Wars style, and although is much simpler in its design, it is a far cleaner and easier to read style.

Low Points : One problem I always dislike in stories is when the Heroes are completely reactive, and Star Wars writers like doing that, as much of Empire Strikes Back is reactive, so they want to mimic what is generally considered to be the best movie.
But here the Republic flees Nespis as it is destroyed and then they try to rescue the Ysanna who have been captured, they don't have any proactive actions against Palpatine or the Empire, they're just reacting to what he does.
And while it's nice to have a powerful villain, and the story is obviously building up to the final issue where everything gets turned around, it does make for a very passive set of heroes in this issue.

I also have to question the failed Galaxy Gun missile. They make a point that the Republic has the newest and most powerful Ion Cannons which should penetrate the projectiles shields and disable it. But apparently are unsuccessful, but, the missile just fails to blow up anyway. Wouldn't it have made more sense if the Ion Cannons had actually worked as intended? Or would that have taken away the power of the Galaxy Gun, as it could now be potentially defended against?

So what do you really think ? : For Empires End I think it's all going to be in the final issue, as this issue was all set up, and the passive heroes made for an uninteresting story.

Final Words : So one issue of the Dark Empire series to go, and Palpatine is looking for the Solo children to steal their bodies, he's got a planet destroying Star Destroyer, and a Planet Destroying Galaxy Gun under his control, so there's a lot which needs beaten in just one final issue.