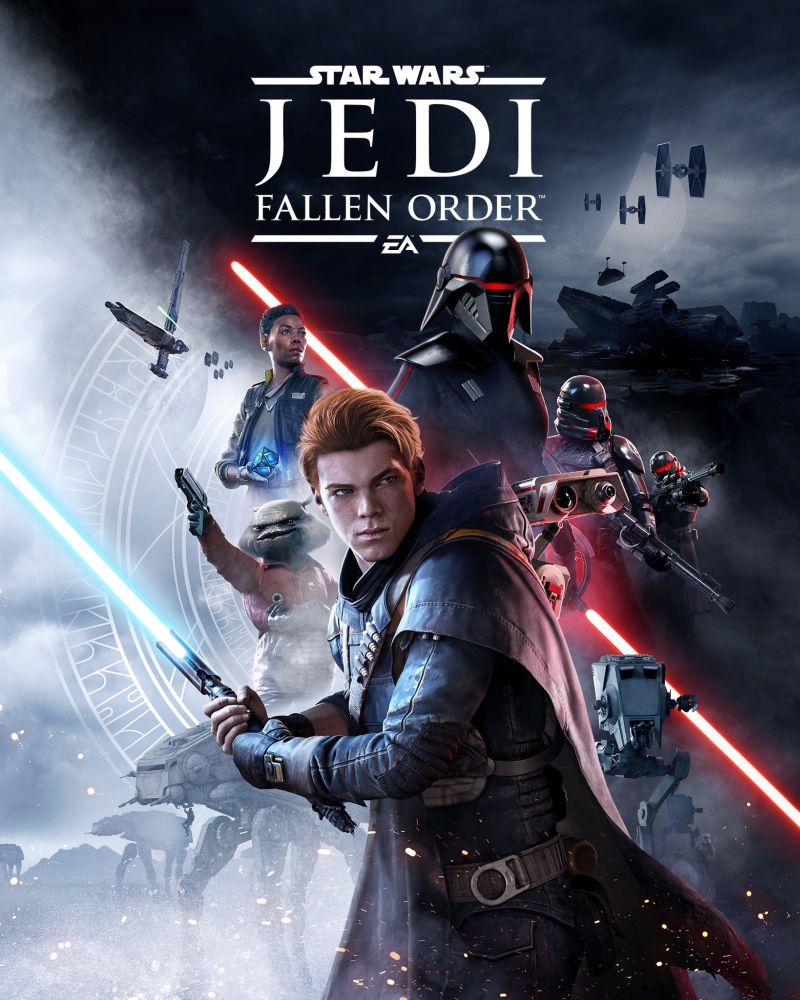 What is it ? : It's the 2019 Star Wars game, set between Episodes 3 and 4 telling the story of former Jedi Padawan Cal Kestis. It's a game with large open environments which are returned to as you gain abilities and gain access to further areas as Cal attempts to find a Holocron containing the location of Force Sensitive children across the galaxy.
As the game begins, Cal is hiding out as a scrapyard worker helping to break up starships from the Clone Wars, both Republic and Confederacy, but when his identity as a Jedi Padawan is discovered, he is forced to go on the run. Rescued by a Jedi Knight and her pilot, he joins her quest for the Holocron, which she cannot complete having cut herself off from the force.
He gains as droid companion, which helps him throughout the story, and searches various worlds for clues towards the way he gain access to it, which it's owner has scattered around the galaxy to stop the Empire gaining access to it.
Instead of learning new abilities, Cal remembers his Jedi training as play goes on, regaining access to ones he apparently had years before.
The antagonists of the game are various Inquisitors, one of whom has a personal connection to Cal's quest, until eventually you must go up against Vader himself.


High Points : The storyline is interesting and involving, but Cal himself is perhaps the best selling point of the game as he is one of the best protagonists in a Star Wars game, a Jedi Padawan hiding from the Jedi Purges and just trying to survive.
The way you gain powers through the game is fantastic, as Cal gets into a situation where his life is in danger unless he remembers an old part of his training, so time slows and you flash back to his training during the Clone Wars.
You then get to practice using the power until you become competent with it, and the game returns to the action and you use the power that Cal has remembered to save his life. This is an innovative way of having the character gain powers through the game, while also telling his backstory and building a relationship between the player and Cal's Jedi Master.
The powers themselves are pretty interesting, and instead of the standard Jedi Push, Pull and Double Jump abilities you see in most Star Wars Jedi type games, Cal learns to wall run, and pull ropes towards himself allowing him to leap into the void, pull a rope towards himself which was previously out of reach and swing across a chasm. This leads to action being more like a super parkour game, rather than just a platformer.

Once again you are joined by a droid companion which lives on your back, much like Dio in Battlefront 2, BD-1 hacks doors for you and also acts as a method of travelling along zip lines. As the story progresses you find various upgrades for him, allowing you to travel up ziplines as well as down, and to unlock harder locks.

Low Points : There are lockboxes throughout the game, and as you gain the abilty to unlock harder ones, you can return to previously explored places and unlock boxes you were forced to bypass at the time. But all these boxes contain are cosmetic upgrades, new clothes for Cal, paintjobs for BD-1 and the hero starship (the Stinger Mantis) and finally cosmetic changes to your lightsaber.
None of these upgrades have any effect in the game itself, which makes them feel really pointless, the handgrip for your lightsaber doesn't come with any advantage (bonus to parry blaster bolts, but decreased damage), just makes it silver instead of gold, etc.
The total pointlessness of these upgrades, which are supposed to provide the impetus to re-explore previously visited maps to gain missed lockboxes, meant that I personally didn't bother returning to the old maps as much as the game seemed to expect me to, cutting it's playtime down and removing much of the replayability (I really didn't care if Cal wore an orange cape instead of a blue poncho).

I also found some of the story beats a little odd. For example at one point one of you companions sells you out and you have to fight your way out of an underground pit fighting arena. When you've escaped, it's pretty much all forgiven, and there certainly no talk of dumping this character since he prove himself so untrustworthy, especially since it wasn't about anything important, he just almost caused your death because he is a bad gambler.

So what do you really think ? : I really enjoyed the game for all of it's shortcomings, and while the storyline of your main companions is pretty lacking (Jedi did bad thing, causing her Padawan to fall to the Dark Side, and now she wants to make up for it). The later companion, a Dathomirian Witch, more than makes up for it with a storyline that meshes with Cal's particularly well, and a fantastically dark sense of humour. Although sadly, she doesn't join Cal until very late in the game, so your time with her is extremely limited.

The flashbacks are fantastic, both acting as training levels, but also building Cal's backstory up until Order 66, which you get to actually play Cal's involvement with in a shocking and emotional section of the game. And I really like how Cal begins play, not as a high and mighty Jedi Knight, or Rebel leader, but instead just as a scrapyard worker, just trying to survive among the wreckage and waste of the Clone Wars.

Final Words : So we're going to go through the game much as we did for Battlefront 2, level by level, reviewing each separately and adding stats to the site from each as we go along.
Now, Fallen Order allows players to approach the games levels in different orders, as you have freedom of choice on what planets to visit next, although some are pretty much forced upon you by the storyline. So we're going to follow the path I took in my playthrough, which may differ from other people who played.