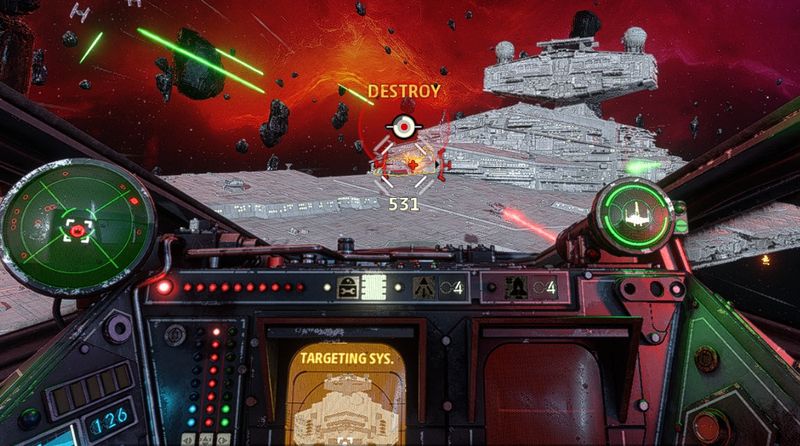 Prologue: A Call to Rebellion

What is it ? : So you switch over to controlling a Rebel pilot now, and learn the controls of an X-Wing this time, which are basically the same as the Tie Fighter you were just piloting, except now you have shields to manage as well as weapons and propulsion.
You fly around the Rebel fleet, until a Hyperspace waypoint appears, a tunnel which you align yourself within to make the jump to Hyperspace, similar to docking the Tie Fighter to the Gozanti, but with the fighter itself making the jump.
Arriving at Fostar Haven you see the transports under attack by Imperial Forces, with a Star Destroyer between you and them, when it is suggested to use your fighters boost to get past the Star Destroyers weapons before it can destroy you. Boosting past the Destroyer, your squadron, Echo Squadron, engages some Tie Fighters and a Quasar Fire Carrier as a Single Corellian Corvette arrives to help you.
However the transports need to get past the Star Destroyer to escape, but the Rebel Fleet arrives and engages it before the transports, and then the fleet jump away to safety. Lindon Javes who has been aiding you, warns that the Star Destroyer will just track the fleet to its destination, and advises you to take out the Targeting Systems aboard the Destroyer. So the Squadron attacks the Star Destroyer, destroying this subsystem before jumping to hyperspace to safety.

High Points : Going up against a vessel of the size and power of a Star Destroyer is impressive, and the fact the game gives you a way of taking out the Destroyer without destroying it is great, allowing the story to progress without making these vessels weak.

Apart from that, this level doesn't add much to the game, just introducing the play style with smaller fighters engaging around the larger capital ships which are dangerous, but more dangerous to each other. Really selling the reason why each side needs fighters, as the Capital ships are titanic weapons of war, but are somewhat vulnerable to small fast moving fighters.

Low Points : This level however begins to highlight the weakness of Capital ships in the game as well, if they hit you, boom you're gone. So you tend to avoid them, however if you can find a place to sit close to their hull where their weapons cannot get a lock on you, you can pound away at them for ages.
This is something that feels nearly what they wanted in the game, similar to the earlier X-Wing and Tie-Fighter games, but feels very wrong for Star Wars. Instead of small fast moving fighters zipping over Capital ships taking out targets and slowly disabling the larger vessels, it becomes a game of hiding in their blind spots, and sitting still blasting away.
The game tries to force you into the former, by making it impossible for you to actually 100% stop your vessel, only to slow down, but by diverting your power away from engines, you can loiter in the blind spots quite effectively.
I would guess against other players in the multiplayer, this tactic just makes you a target, but in single player it kind of kills the game.

So what do you really think ? : A fun enough level, bringing Lindon Javes onto the Rebel side, and introducing you to the differences between Rebel and Imperial fighters and tactics.


Final Words : There's perhaps not enough variety in the levels to make these reviews particularly interesting, but there's so many modified fighters to cover, that I'm going to need the time. Hopefully some of the plots will provide interest as we go along, as much of the storytelling isn't told through the missions, but through the section in the hangar and briefing room at the beginning of each level as you speak with your commanders and other squadron mates.