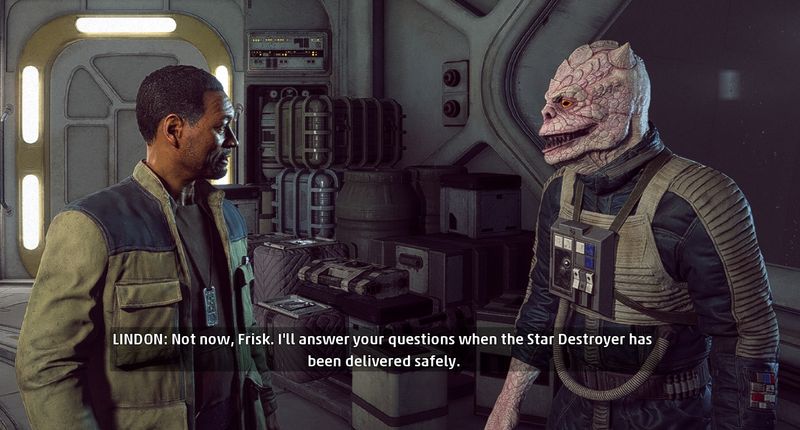 What is it ? : Still remaining with the Rebels, in the hangar you get to interact with your squad mates again, Gunny tells you of his time on Mimban fighting the Empire (he is Mimbanese), Keo speaks of sensing energy around Yavin, and Frisk expresses displeasure at being kept in the dark by Lindon Javes about Project Starhawk.
There has been a distress signal from the Victorum, the Star Destroyer you rescued in the last mission, which has fallen out of hyperspace. They are trying to repair the hyperdrive, but Imperial forces are closing on them, Javes wants you in an A-Wing interceptor taking down enemy fighters.
After the briefing, Gunny tells you how he lost his arm during the Clone Wars, while Ardo blames himself for not sending more engineers to the Victorum. Keo tells you how she has hunches which are normally right, as her people are unusually connected to the Force, while Frisk asks her to predict lottery numbers for him.
Launching in your A-Wing and arriving in a debris field near the Victorum, there are six Tie Bombers to intercept and take out, but these are guarded by Ion Cannon armed Tie Fighters which can take out your shields, but if you destroy the Bombers, the Tie Fighters just leave.
The Empire then sends three pairs of shuttles to try to recapture the Destroyer, and if even one reaches the vessel the mission ends, but the speed of your A-Wing allows you to easily catch the shuttles, even though the shuttles fly through larger pieces of wreckage to shield themselves from you.
Carriers arrive, which launch a constant stream of Tie Fighters, however the Rebellion sends in some Y-Wings to take out the Carriers, and you have to protect these slower moving fighters as they perform their mission.
As the battle has a quiet moment, Keo teaches you how to drift your fighter, leaving it flying in it's original direction while you turn and shoot in another. Once you successfully do that, you buzz the bridge of the Victorum, and it tries to Hyperspace out, but it fails.
More Carriers arrive, and you and the Y-Wings must protect the Star Destroyer against the bombers they launch, and once you've dealt with these, but haven't had time to take out the carriers, an Imperial Raider arrives, upon whose destruction the Carriers launch more bombers.
But the Victorum's shields reactivate protecting the vessel against the proton bombs the Bombers have launched. Two more Raiders attack, but cannot breach the Star Destroyers shields, which slowly begins to make its way to the Hyperspace exit point, with you accompanying it and making the jump to Hyperspace and safety.

High Points : The characterisation of your fellow squad mates is excellent, we're really getting into Wing Commander territory here, with some of the story, and all of the world building taking place through short conversations between missions. Which is no bad thing as I loved the Wing Commander games.

This mission is also more interesting than the previous ones, as we're starting to get some more complex game play elements being included as well as the pressure being increased as the scripts plays out. For example the shuttles don't just fly towards the Victorum, they take evasive paths, using the wreckage field to stop you from easily picking them off. Sometimes actually flying inside larger pieces of wreckage forcing you to swoop in and follow them inside, or wait for them to emerge into empty space, but uncomfortably close to their target.

Low Points : While the game is really showing its limits by this point, as missions are so carefully scripted, destroy the bombers, shuttles arrive, destroy them, carriers arrive, and so on. This particular mission isn't guilty of this more or less than the others, and does manage to be quite fun, even down to one of your squad mates teaching you a new piloting technique during a lull in combat.

So what do you really think ? : I enjoyed this mission, and it's quite fun to zip around the battlefield in an A-Wing, even though you can't dish out the damage of the X-Wing, it does have it's own joys in piloting one of these speedy little fighters.
For some reason, Squadrons does make me feel railroaded by the scripting more so than any other Starfighter simulator I can think of playing, although when I think logically about it, it's not guilty of anything that those other games do in their own way. It's perhaps that Wing Commander for example, had skirmishes which would take place at waypoints in the mission, so each encounter played out separately rather than flowing into each other at prescripted moments.

Final Words : Now we've played a bunch of missions as the Rebels, and gotten used to the banter with our teammates, we're going to be ripped from them and dumped into the Imperial storyline next mission.