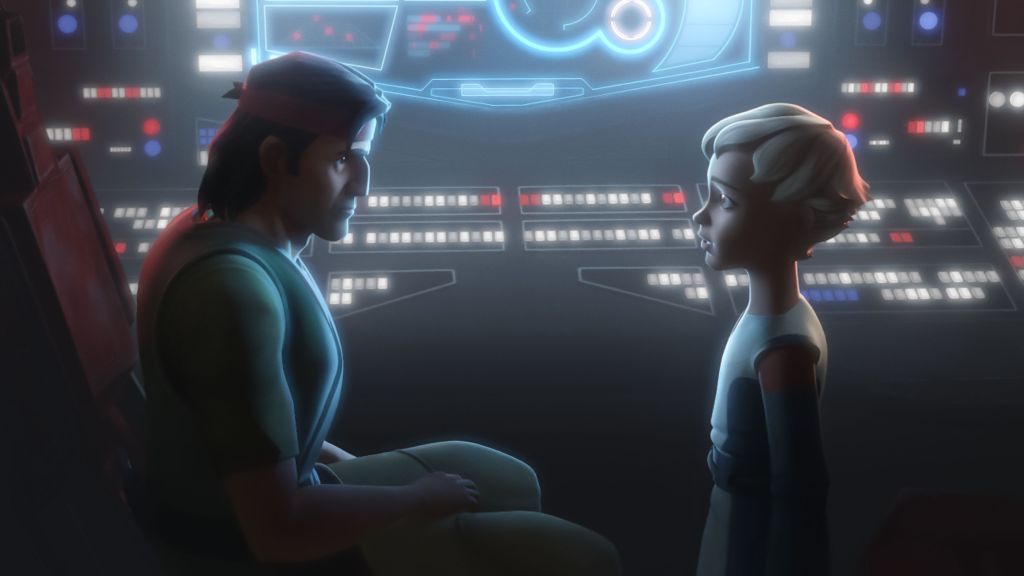 What is it ? : The Havok Marauder travels through hyperspace to Saleucami, where they intend to locate a friend, but Hunter and Echo look over the sleeping forms of Wrecker and Omega, and discuss what they're going to do with the child. She's one of them, but only a child.
Arriving at the world, they disembark only to discover a lot of booby traps, and meet up with Cut Lawquane and his Twi'lek wife Suu Lawquane, who we last saw back in the Clone Wars when Rex found them. Cut is a former Clone Trooper who deserted when he fell in love, and Echo questions whether they can trust a deserter, to which Hunter points out that they are all deserters now.
Going into Cut's home, Omega meets his children, and they head off to play together, as the others discuss their situation. They talk about the inhibitor chips which made the Clones obey, and Cut mentions that Rex stopped by only the day before to warn the Laquane's about the building Imperial presence, and that they are intending to leave the world.
Hunter offers them transport offworld, but for the good of his children Cut thinks the Bad Batch are too much of a target to be near. Hunter and Cut head into a nearby town so Cut can purchase tickets for transport offworld. They discover that starships are being impounded, and that all travel requires people to have a chain code, which makes Hunter realise that the Empire isn't just registering ships but also people.
Back at the Lawquane farm, Omega is playing with the children and she chases a ball which lands outside the perimeter, ignoring the other childrens calls to remain inside and she is stalked by a Nexu, the children alert the Clones, who chase the creature off with Hunter berating Omega over her behaviour. Cut comforts the child, explaining to hunter that fighting Droids was easy compared to raising children and Hunter considers whether the Bad Batch are the best people to be looking after Omega. Omega goes to the Havok Marauder, and Hunter comes to the decision that she should leave with Cut and his family as it will be a safer and better environment.
Tech comes up with a way of forging the chain codes for Cut and his family, but needs components from within the Imperial compound, so he and Echo get the Havok Marauder impounded to get them inside, but realise that Omega is still aboard.
Echo steals the chips, and Tech encodes them, with Omega sneaking out to deliver them to Cut's family, Hunter tells her she is to go with them, before heading off to help Echo, Tech and Wrecker break the Havok Marauder out of the compound, but she re-joins the Bad Batch, and as Cut and his family are cleared to leave and their shuttle departs and the Havok Marauder flies off into space, she tells Hunter this is where she wants to be, and Hunter tells her he has a lot to learn.

High Points : A solid episode, and really nice to see Cut and his Twi'lek family back, and while I constantly want to be annoyed at Wrecker's portrayal as the dumb muscleman, I do find his comments to be pretty funny so I probably should get over my own bias against this obvious stereotype and just enjoy the dialogue.
And speaking of stereotypes, I do like Tech's avoidance of being one. Normally the smart character would look down on the other characters, but Tech doesn't, he follows orders and is definitely part of the team. However he does forget that not everyone is as fast as him, taking for granted for example that everyone realised that the Order 66 programming came from their behaviour chips, whereas everyone else wasn't even aware of the chips existence.
This does make him an interesting addition to the team, someone who solves all the problems, but doesn't spend all his time explaining to the team how to do things, as he just sees it as obvious.

Low Points : So when did the Bad Batch discover Cut's existence? Rex was the only one who knew, and was going to keep it secret! I know he grew to trust the Bad Batch during the episodes they shared together, but I did realise he trusted them enough to share all his secrets with them.

I thought the heavy handedness of making the point about the Clones wanting names, but now everyone lining up for the Empire to give them numbers was a bit too much. They're obviously trying to make Nazi comparisons here, but in reality we're all given numbers all the time, bank account numbers, social security numbers, national health numbers, etc, numbers aren't inherently evil.

The Clone Troopers on Seleucami not recognising Cut I found stupid, he's got the same face as them, they see it in all of their comrades, they see it in the mirror when they shave, he's got the most recognisable face to Clone Troopers possible, as it's the one they see ALL the time. I also found it a little odd that he thought his family staying with The Bad Batch would be dangerous for his family, as Hunter and the rest (apart from Echo) aren't really recognisable as Clone Troopers, and could easily disguise themselves. So it's his face which is the main danger to his family, not the Bad Batch.

So what do you really think ? : A decent enough episode, but not anywhere near the heights of the pilot episode. It's still interesting to see the formation of the Empire, but it's not really the Empire we've seen anywhere else. The Empire numbering people and numbering ships, we've not really seen that before, was the Millennium Falcon numbered and registered? Did Luke and Obi-Wan have to show their ID numbers when Stormtroopers stopped and questioned them in Mos Eisley?
This is a time period I really want to see, I want to see how the galaxy adapts from the Clone Wars, I want to see what happens to worlds once part of the Confederacy, and now conquered.
Is that what we were seeing here? Was Seleucami once a Separatist world? Now coming under control of the Empire? As it really didn't give that feeling, it seemed like a Republic world.

Final Words : I still suffering from old series cameo overload a little here, while it's nice to see Cut, after having Kanan, the Medical droid who treated Fives, and Tarkin last episode, now we've got Cut showing up this episode. I'm left with a dread feeling that we've got a Rex and Ahsoka story coming up soon, and Maul will be a regular antagonist.
Like the Mandalorian, this just makes the universe feel small (especially that episode where a character turns up riding Anakins's podracers engine, and wearing Boba Fett's armour, just after they left someone who owned the red Astromech which malfunctioned in A New Hope, too many callbacks).