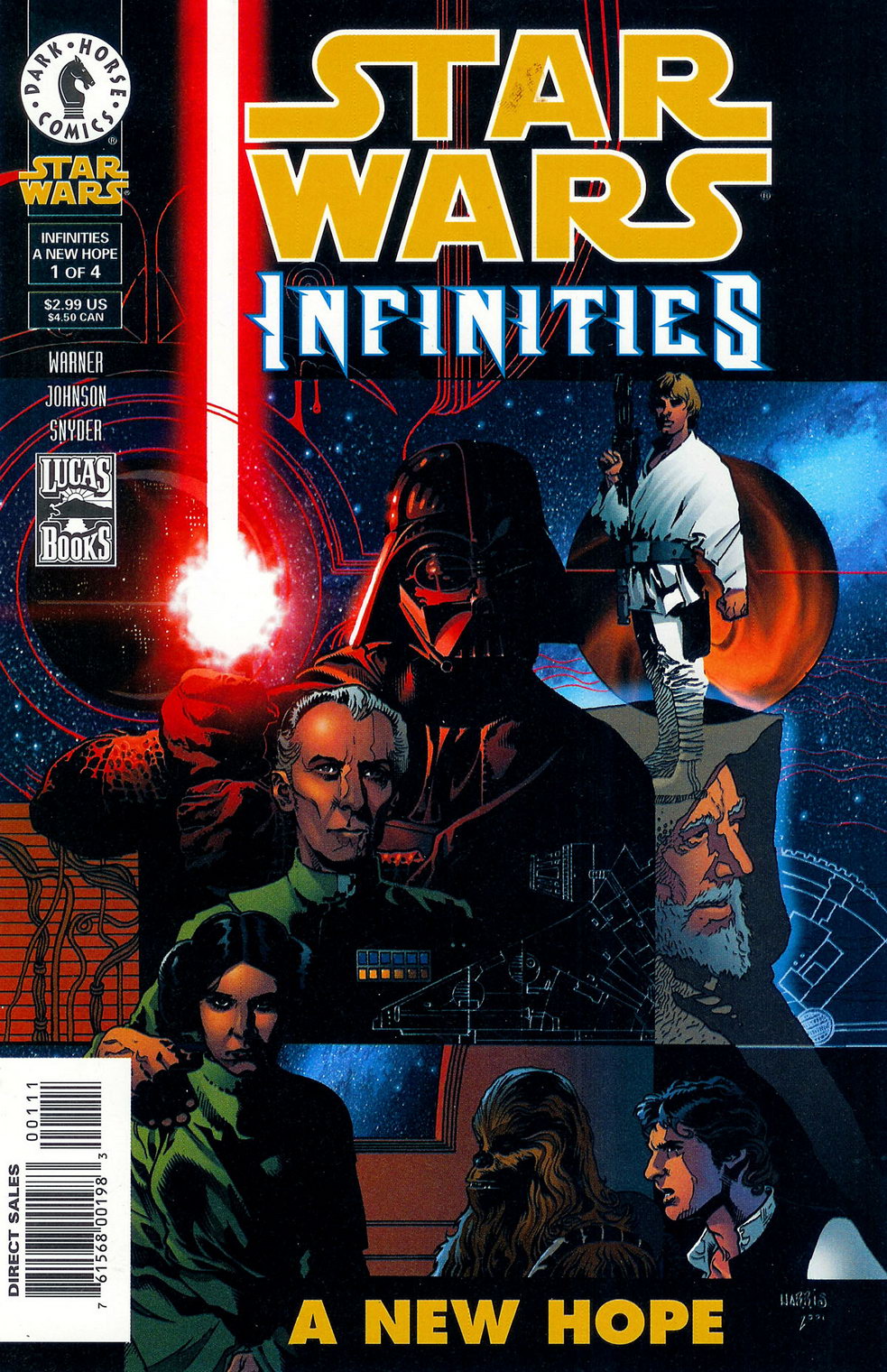 What is it ? : We begin with a run through of the events of A New Hope, explaining the events and friendships which were formed during that story, how those forma chain, but one tiny change leads to a totally different future.
We then join Luke in his X-Wing making the trench run on the Death Star, he is attacked by Darth Vader, and rescued by Han, exactly how things played out in the original, and he fires his Proton torpedoes directly on targets, and as they fly away they realise something is wrong as the Death Star doesn't explode.
Their sensors detect that one of the Proton torpedoes malfunctioned and detonated short of the reactor core, a common failure in the design.
As the Death Star prepares to fire on Yavin IV, an officer explains to Tarkin that the Torpedo has damaged the energy system and they cannot fire on full power until it is repaired in a few minutes. Tarkin orders a lower power shot instead, which hits the Massassi Temple, reducing it to ruins, Leia, General Dodonna and others flee for their ships, unable to communicate as energy from the blast has blocked all channels.
Tarkin realises that the blast wasn't powerful enough, and orders all Tie Fighters launched to catch any fleeing ships as the Death Star prepares to fire again at full power.
Luke and Han are swarmed by fighters, and swing closely round Yavin to try to lose them, as the Death Star fires again, destroying Yavin IV. The Rebel fleet fleeing the now destroyed planet in mainly unarmed Gallofree Transports are caught by Darth Vader and the Tie Fighters dispatched by the Death Star and forced to surrender.
With communications out, and having been on the other side of Yavin at the time, Luke assumes that everyone at the Rebel base was killed, and in anger he starts destroying Tie Fighters, until he hears Obi-Wan, who tells him not to give in to anger. Recovering somewhat, Han leads their ships into the debris field left by the destruction of Yavin IV, due to the danger the Tie Fighters abandon pursuit, assuming that they will be destroyed. But due to Han's skills and Luke's force enhanced abilities they reach clear space once more and make the jump to Hyperspace.
Meanwhile aboard the Death Star, the Rebel Transports land, and Grand Moff Tarkin meets with Leia and Dodonna as they disembark, Leia is speechless at being taken prisoner once again, and Tarkin tells her that her time will be best spent contemplating how she can best serve the Empire. . . .

High Points : This issue is all set up, so nothing too special happens yet, but it all plays out well, and I do like the way that it utilises elements from the later movies which won't happen in this timeline. So instead of the Asteroids in Empire Strikes Back, they use that segment here, but instead it's the debris field left over from Yavin IV.

Low Points : The lower power shot that the Death Star lets out, brings down the Massassi Temple it targets, but only barely. This seems far too weak even for a low power shot from the Death Star, and I would have though that ordinary Star Destroyer turbolasers would have had a similar effect. I know this comic was published long before Rogue One was released (it was published in 2001), and my opinion may be coloured by the events of that movie. But it really does seem pathetically weak for a superlaser, and would have definitely preferred if the blast had missed (some of the lasers making the beam up having not fired, so the blast goes off target) and the Temples being on the edge of the blast zone.

So what do you really think ? : At this early stage in the story, there's not a huge amount to like or hate to tell the truth, we're still setting up the story. And it's nicely told, and the artwork is of high quality, with some extremely nice images in there.
I've marked this issue quite low for me, as it's really lacking a spark to make it interesting, and it's all a little too conventional and predictable for an alternate universe story where anything could happen.

Final Words : With Leia a prisoner of the Empire, Luke and Han as the survivors of Yavin, I'll be interested to see where the story goes, although it does look kind of obvious so far, as I assume that Obi-Wan will direct Luke to Yoda, and that Leia will be turned to the Dark Side by Palpatine, and replace Vader as he intended for Luke. With the loss of her homeworld, and no force training, she'll easier to corrupt than Luke was.
But it remains to be seen how accurate that prediction is, and perhaps the writers will throw in some surprises.