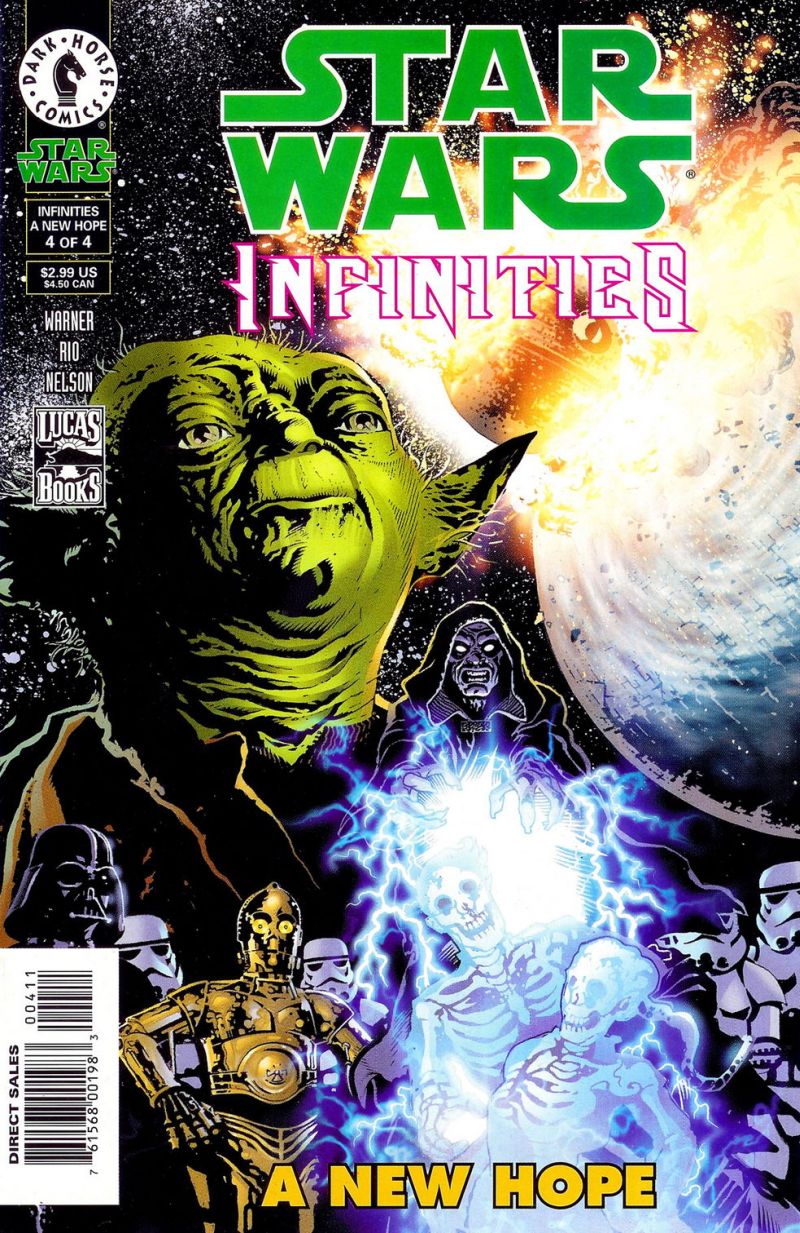 What is it ? : The Millennium Falcon emerges from Hyperspace around Coruscant, in space crowded with hundreds of Imperial vessels, ranging from Squadrons of Tie Fighters to dozens of Star Destroyers, the newly renamed Justice Star floats along with at least 13 Super Star Destroyers. Yoda comments that we will now truly discover which side of the Force is stronger, while Vader and Palpatine on the surface feel the arrival of Vader's son Luke in the system.
The Falcon lands on the Death Star, commanded to set down in docking bay 7, and Yoda and R2-D2 exit the ship, with Yoda mind tricking the Stormtroopers into letting the Falcon leave, and allowing him to roam the station at will.
Chewbacca takes the Falcon down to Coruscant, and Han and Luke exit the ship to rescue Leia once more, although Han comments that he's still waiting for his reward from last time.
Yoda reaches Tarkins quarters, and mind tricks him into taking him to the control section for a demonstration of the Battle stations abilities. Meanwhile Luke and Han are in the old Jedi Temple and encounter some Imperial Royal Guardsmen wielding Lightsabers, Hans blaster gets destroyed, and he takes up one of the Guardsmens double bladed lightsabers, helping Luke out in the melee.
They eventually reach the throne room, where Luke is confronted by Leia, who Palpatine arms with Vader's Lightsaber. C-3PO approaches Han and Luke, pulling a blaster on Han and forcing him to drop his weapon, while Luke reveals to Leia that she is his sister, but she still attacks him, but Vader is taken aback as he never realised that she was his daughter.
Meanwhile aboard the Death Star, Tarkin demonstrates it's super laser to Yoda by firing at the massive Imperial fleet, destroying a Super Star Destroyer. Palpatine hears the news, just as Leia finally returns to the Light side, and she and Luke cast their lightsabers away, declaring themselves to be Jedi, just like their father. To which Palpatine force lightnings them as Vader looks on torn by watching his children tortured by the arcing electricity, so turns on his master.
Luke and Leia take the opportunity to save Han from the armed C-3PO, and the group flees the chamber encountering dozens of Imperial officers and Stormtroopers outside.
Without a pit to throw Palpatine into their time, Vader eventually is overcome by his master, but a screen crackles to life, Yoda telling him that his fleet is shattered, and when Palpatine tells him that his forces aboard the Death Star have now disarmed it, Yoda tells him that he is coming to see him now.
Reaching outdoors and calling for Chewbacca to come for them, Han, Luke and Leia watch as the Death Star comes out of orbit, crashing down on the old Jedi Temple and Palpatine.
The Falcon swoops in and collects them, racing away as the Death Star impacts the surface causing an enormous explosion and fireball across the surface of the city planet.
Years later, a massive celebration on the world of Naboo as Leia is appointed Chancellor of the New Republic, R2-D2 has been rebuilt using a copy of his memories he stored in the Millennium Falcons systems, and Luke points out the Force ghosts of Obi-Wan, Anakin and Yoda to Leia as the everyone celebrates. . . .

High Points : Well, it's big and spectacular, with Yoda seizing control of the Death Star by mind tricking Tarkin, and not only using it against the Imperial fleet, but physically crashing it down on the Emperors head. And it's definitely a demonstration of what fanboys have been asking for years, why don't the Jedi just mind control captains and use them against the Empire.

Low Points : Okay, first of all, throughout my description above, and throughout this issue, it uses the name Death Star, yet last issue they had renamed it the Justice Star. Is this just a mistake, or a display that while for PR purposes the population were told that the station wasn't an ominously named Death Star, but within the Empire they never bothered to change what they called it.

Hans moans that he never received his rewards for rescuing Leia, but this divergent timeline comes from Luke's torpedoes not detonating at the right time, which comes after us seeing Han load his reward onto the Falcon, or had the timeline actually began to diverge because the Rebels turned out to be stingy in this version of events, not paying Han, and buying discount Proton Torpedo's.

Star Wars never really bothers about the number of innocent deaths caused in the movies, usually explained away as the Imperial forces have chosen their side, and the innocent civilians are killed by the bad guys (so in the original version of A New Hope, the bad guys kill the population of Alderaan, making them the bad guys, but the Rebels only destroy the Death Star and everyone in it, as presumably they've chosen their side, and it's the bad side).
But here, Yoda not only uses the Death Star to kill the crews of the many Star Destroyers he gets Tarkin to fire upon, not only the crew of the Death Star when he crashes it, but presumably many millions for miles around as he crashes a 120 kilometer+ Battle station into the middle of a densely populated city planet.
Oh well, collateral damage, better dead than Imperial and all that.

So what do you really think ? : For a totally over the top ending, with the Death Star blasting the Imperial fleet and Luke and Leia fighting it out, before Yoda crashes the Death Star onto Palpatine's head, it's amazing.
And that spectacle is what drags this final issue up, and actually makes the entire story worth reading. Before this issue, the story was fairly interesting, but definitely wasn't one of Dark Horse Publishing's best stories and not really worth recommending, but the ending makes it worth a read through.

Final Words : So I'll be intrigued to see if the other two stories in the Infinities range live up to the over the top spectacle of Infinities A New Hope, or whether they can find other, perhaps as interesting ways of exploring alternate versions of the movies.