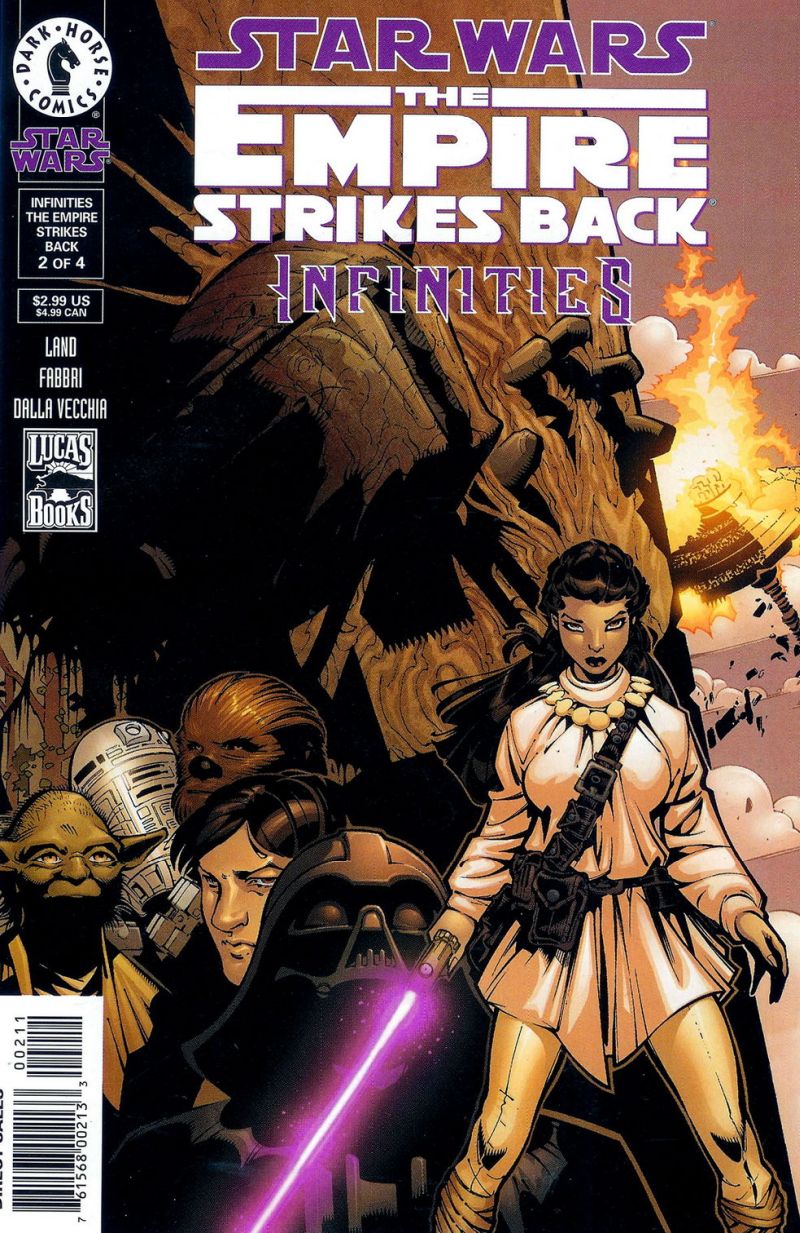 What is it ? : After being surprised at Boba's arrival, Lando finds out that he's here for Han, at the request of an employer, who Lando assumes is Jabba the Hutt. Lando sets Boba up, and he is ambushed as they reach Han, Chewbacca and Leia and knocked unconscious.
Lando has a plan for Boba, and has the Falcon repaired and Han, Chewie and Leia leave to travel to Dagobah, and just as they depart, a Star Destroyer arrives in orbit, and contacts Lando demanding to speak to Boba, who Lando has had carbon frozen and now is serving as Lando's new desk. When Lando tells Vader that neither Boba nor Han or Leia are present, Vader begins an attack on Cloud City, and the evacuation of the city is ordered as it's engines are destroyed and it plummets into Bespins atmosphere.
As the Falcon travels through Hyperspace, Leia feels the deaths caused by the destruction of the city, although Han just puts it down to stress. They arrive at Dagobah, landing and meeting with Yoda, who greets Leia and tells her that he was expecting a different Skywalker., and tells her that she is Luke's brother, and they were both the children of Darth Vader.
Han is outraged since he thought he was to be a Jedi, but Leia knows what Yoda is telling her is true, and although Han expresses a concern for her safety, Yoda tells him the death mark on his head from Jabba is more of a threat to her safety than remaining on Dagobah and training as a Jedi.
Han departs in the Falcon, intending to clear his death mark and then return, and Yoda gives Leia a lightsaber, telling her that when she sees her friends again she will be a Jedi. . . .

High Points : It took me a second look to notice that Lando winks at Lobot, and then Lobot uses his cyborg head attachment to presumably arrange the ambush of Boba Fett, and that's a nice touch, but my favourite was Lando having Fett made into his desktop, the slab of carbonite hovering upside down to use the flat bottom of it, while Boba's frozen features are on the lower surface.

It's also quite dramatic the attack on Cloud City, with Vader just ordering the attack as he senses that Han and Leia are not present, but that Lando is lying to him. So the city is bombarded by Star Destroyer turbolaser fire, until it drops from the sky to an uncertain but probably doomed fate deep in the atmosphere of the gas giant.

Low Points : Yoda's treatment of Leia is so different to how he treated Luke, without any seeming reason, he straight away breaks it to her that she's a Skywalker and that Vader was their dad, before he starts any training. There's no pretending to not be Yoda, there's no cryptic comments, or worry about whether she will manage. Just a quick, Luke's your bro, Vader's your dad, by the time your friends get back you'll be a Jedi.
I actually prefer this behaviour, but it's so different to the characterisation we saw in the movies, that I have to comment on it.

When Vader turns up and destroys Cloud City, he's aboard a normal Imperial Star Destroyer? But this is Empire Strikes Back and throughout that movie he uses a Super Star Destroyer, and even though we skipped through the beginning of the movie in this retelling, so we could get to Luke's death, I'd assume that everything before that was the same, so Vader was aboard the Executor.
So why has he suddenly decided to swap back to a smaller ship? Or more likely did that Artist just forget about that point, and just draw a standard Imperial Star Destroyer?

So what do you really think ? : It's nice to see things playing out differently to the original story, as not only does Fett get beaten and frozen in carbonite instead of Han, Cloud City gets destroyed, and Leia begins her training. So while it shares many elements with the original story, it's playing out very differently, and coming across as it's own story rather than just a bit of a remix as these tales have been in past issues.

Final Words : With the events of Empire Strikes back having now been played out, I guess in the next issue we're going to move onto the events of Return of the Jedi, with Han travelling to Jabba's palace to clear his death mark, although will he need rescuing by a Jedi again?