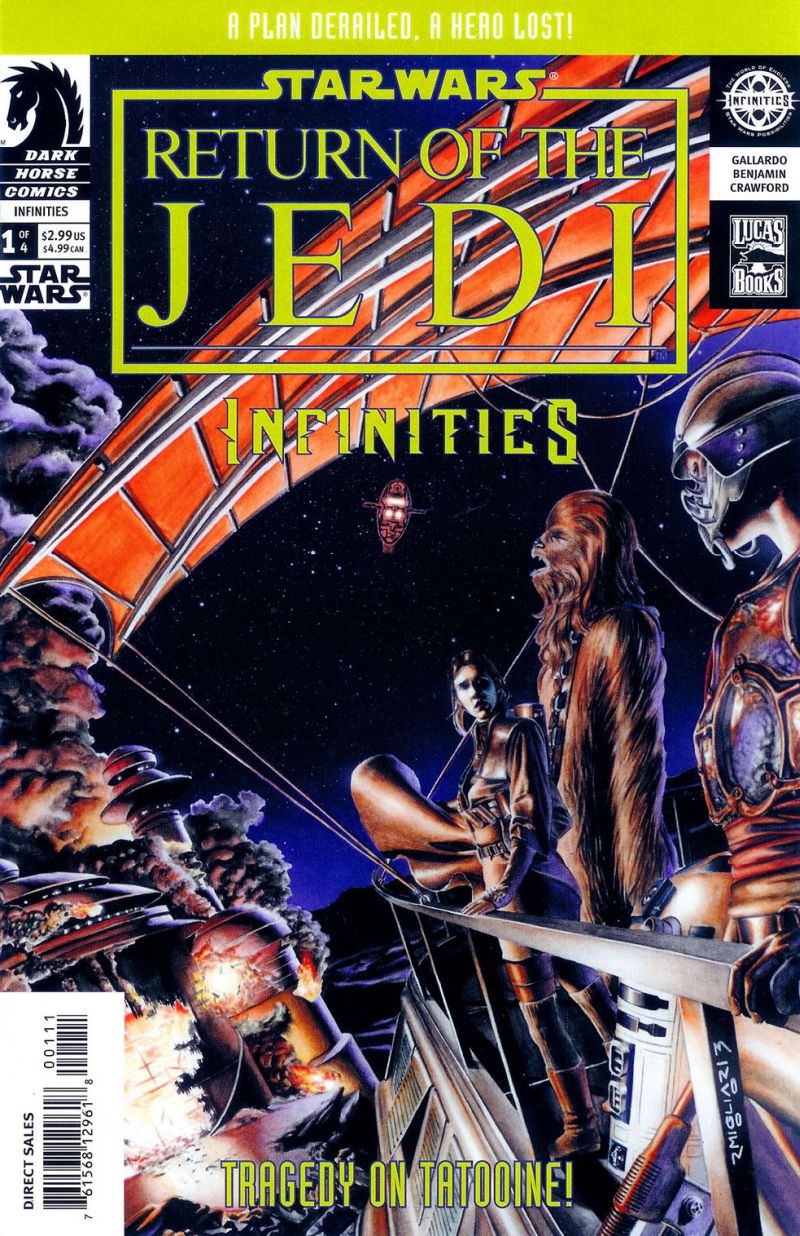 What is it ? : So we pick up in Return of the Jedi, Leia has entered Jabba's palace disguised as Boussh, and demands a high price for the bounty on Chewbacca. Jabba lashes out striking C-3PO who falls and his head comes off . . .
Unable to understand Leia's Boussh disguise, Jabba orders his guards to deal with the supposed Bounty Hunter, causing Leia to remove her helmet to speak with Jabba who instantly recognises her. She uses the Thermal Detonator to threaten him, and a Melee breaks out which Boba Fett decides to take advantage of by stealing the Carbonite frozen body of Han Solo, reckoning that the Empire will pay for him if they know Leia and Luke will come for him. Leia shoots at him, but misses hitting the controls on the Carbon Frozen Solo.
As the Palace explodes, Leia, Chewbacca and Lando escape, but C-3PO is destroyed, and R2-D2 helps them steal Jabba's sailbarge to escape.
The rendezvous with Luke, who suggests that they search the cantinas of Tatooine for word on Boba Fett's escape, saying that Yoda must wait.
On Dagobah, Yoda weakens accompanied only by the Force Ghost of Obi-Wan, wondering what happened to Luke, eventually passing away as the heroes continue to rough up bars in their search for Boba and Han.
On the Death Star, Palpatine senses a disturbance in the Force, and senses that Yoda has died. . ..

High Points : I'm struggling to find something nice to say about the story, but I find it easy to complement the artwork, as there are some lovely images in here, especially of Leia, as the emotion of the story is from her, fear when 3PO is destroyed and their plan goes awry, relief when she sees Luke again. While all the heroes are here, this issue definitely is Leia's story.

Low Points : Whereas the other Infinities stories were based around small changes which led to major effects, Luke's torpedoes not detonating, and Han's Tauntaun dying of exposure. But this one, where C-3PO instead of just falling, falls and his head comes off, is near to the prequels in levels of farce.
3PO's head comes off, Leia drops the Thermal detonator, which totally destroys Jabba's Palace, killing Jabba and destroying 3PO. It's slips and falls, and totally farcical.

So what do you really think ? : I am not impressed at all, and knowing the way this one ends, I'm not expecting the rest of the story to be much better, but we shall see, hopefully I'll be surprised.

Final Words : Having done two stories where something changes for the Rebel heroes, and the story adapts around it, I really think they missed something here by having something happen to the bad guys which changes the story. Palpatine replaces Vader for his failures, and we get a new Sith Lord, or Vader overthrows Palpatine and is the Emperor at the end of the story, or maybe even the Rebels discover Palpatines Ambush, so they call off the attack at Endor. Something a little different to the other ones, where this is just shaping up to be more of the same, just sillier.