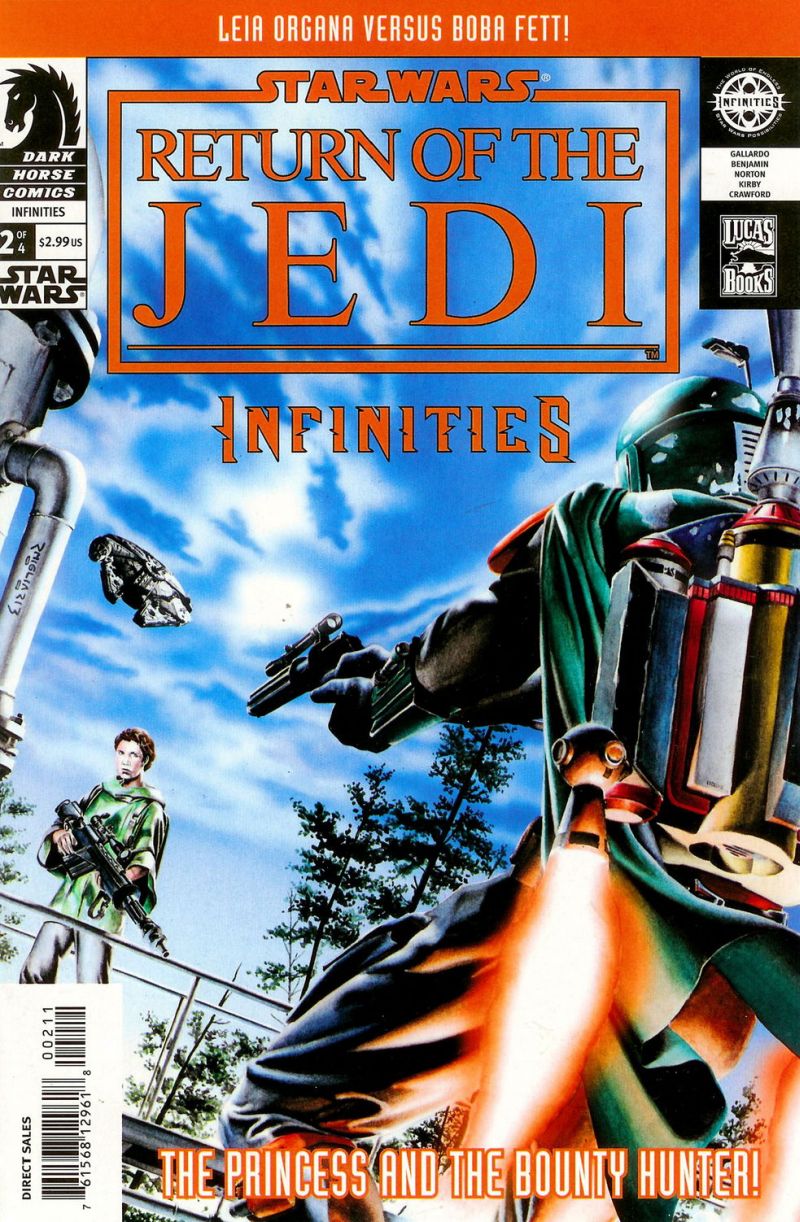 What is it ? : The Emperor has sensed a disturbance on Dagobah, and sends Vader to investigate, although Vader expresses concern about the Rebel fleet amassing at Sullust.
Meanwhile Leia, Chewbacca and Lando are shaking down a patron of a Cantina looking for Boba Fett, they find out he will be at a landing area making a deal with the Empire.
Luke arrives at Dagobah, where the force ghost of Yoda and Ben advise him about Vader being his father, and then inform him about Leia being his sister.
Boba Fett meets with the Empire, and comes to a deal to sell them the Carbonite frozen body of Han Solo to help them capture Luke and Leia, but Leia is waiting in ambush with a sniper rifle.
Luke leaves Dagobah, intending to rendezvous with the Rebel fleet at Sullust, however Vader's Star Destroyer has arrived, and captures his X-Wing with a tractor beam pulling it aboard, but not before he sends a message to the fleet.
Leia attacks with her sniper rifle and Fett taunts her about attacking alone, only for the Millennium Falcon to swoop in. However Fett uses hit Jet Pack to leap aboard, but is taken out.
Leia rushes aboard Slave One, to take Han back to the fleet at Sullust, but the ship won't activate, and Lando and Chewbacca can't find a key or activation override. However, Chewbacca just throws the Bounty Hunters body aboard Slave One, and the override built into his armour allows Leia to activate the ship and take off.
Luke is chained in a cell aboard the Star Destroyer, and is visited by Vader, who once again offers him the chance to rule the galaxy at his side. Luke refuses, but Vader advises him to consider it, as the choice will be out of their hands and in the hands of the Emperor when they reach the Death Star. . . .

High Points : The fight against Boba Fett is an enjoyable confusing melee, where neither side predicts what the other is going to do, so everyone is just reacting to what's going on in a fairly realistic and interesting way, even thought Fett does seem to get taken down fairly easily (although gets a better death than he got in the original Return of the Jedi).


Low Points : A big question I'm left with is how does Palpatine know where Yoda is, and why does he dispatch Vader there, something we never saw in the original movie. If he always sensed Yoda's death, why didn't he dispatch Vader to go there in the original version of the movie, which would have made him miss a portion of Return of the Jedi.
Although that said, it does at least give Luke missing Yoda's death some repercussions. As the force ghosts of Yoda and Ben brief Luke on everything he needs to know, meaning that Luke not being there before he died doesn't matter one little bit.

So what do you really think ? : This issue seems really brief, Lando and Leia retrieve Han, Luke gets captured by Vader, there's nothing much of any interest here, it just seems to be moving the story forward and putting different characters in place for the finale.

Final Words : I'm guessing they're setting us up for something interesting in the final couple of issues, but this issue comes across as pretty pointless and not that interesting at all.