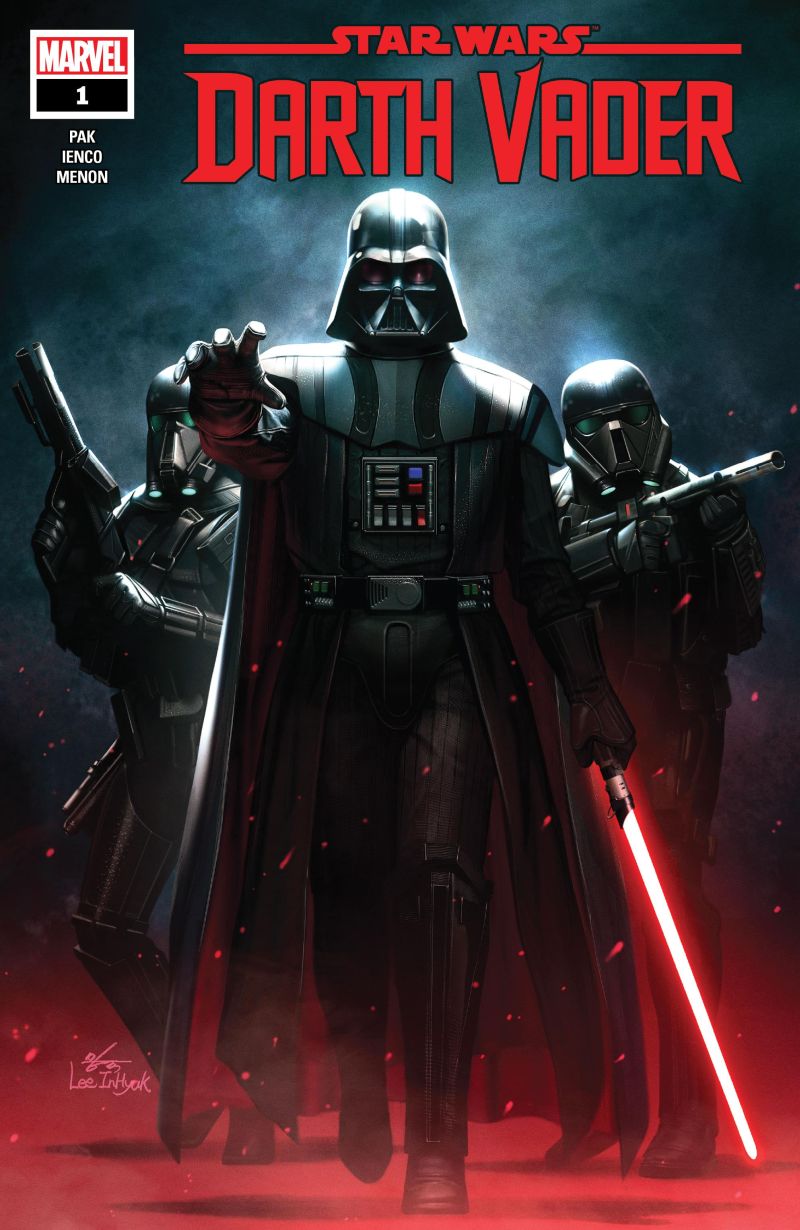 Darth Vader: Issue 1: Dark Heart of the Sith: Part I

What is it ? : Darth Vader and Luke Skywalker have fought at Cloud City on Bespin, Luke lost his hand and fell only to escape aboard the Millennium Falcon. Vader has returned to his Star Destroyer, but has questions about his son, so orders some Death Troopers and a Forensics Droid, ZED67, to accompany him aboard a Lambda Class Shuttle.
The Emperor orders Admiral Piett to get Vader to make contact immediately, but Piett has to report that Vader is unavailable as he watches the Shuttle jump to Hyperspace. Something Palpatine finds amusing as he laughs from his throne on Coruscant.
As they travel, Vader modifies the Droid to self destruct rather than reveal any details of what it learns on this mission, something the droid appreciates in its thoroughness. So Vader tells it of Skywalker, the pilot who destroyed the Death Star and his plan to destroy everyone who hid the boy from him. ZED67 suggests starting wherever the boy was first seen, and they arrive at Tatooine.
The Shuttle is spotted by some Pirates, who assume that a shuttle arriving without escort might be on a mission involving Imperial bribery, so there may be crates of credits aboard.
The shuttle lands, and the local garrison leader meets Vader offering the help of his forces, but Vader just strides past him, while ZED67 asks for access to his terminal with local records. Having retrieved what they need, they then take the shuttle to the Lars moisture farm, where ZED67 begins reciting the history, of when Cliegg Lars owned the farm with his wife Shmi Skywalker. After their deaths, it was inherited by Cliegg's son Owen and his wife Beru, who at some point adopted a child, Luke Skywalker. There are little official records about Luke, although it is known he had an affinity for piloting, and the two examine Luke's garage, looking at his tools and toys.
Vader remembers being here before, with Padme, as ZED67 continues to examine the garage remarking that Luke knew how to care for his droids, but the place has been scavenged and damaged by Tusken Raiders, who it remarks are know to operate in the area, as Shmi was killed by some, although shortly afterwards an entire tribe was slaughtered.
Vader continues to observe quietly, remembering telling Padme about killing the Sand People and how that led him down his current path, to hatred, to fighting Luke, and watching the only part of Padme remaining fall from him.
ZED67 remarks that Vader has come to punish someone, but no one remains, but then detects the graves of Cliegg and Shmi, the headstones buried to hide them from the young Luke. Scanning around, ZED cannot detect any graves for Owen or Beru, thinking that Vader could have desecrated the graves as a message to anyone who defies the Empire.
As Vader remembers burying his mother, the Commander of the Local garrison arrives on a speeder with some of his forces, to offer help to Vader, but the speeder explodes as the Pirates from orbit strafe it. Vader strides through the flames, as the pirates circle around to take him out, but he grabs their ship with the force crashing it into the ground, only to slaughter the occupants as they exit the wrecked ship.
ZED asks Vader if they are now done, to which Vader tells him that they have just begun, and they board the shuttle and travel to Coruscant, setting down at Padme Amidala's residence. ZED suggests contacting local authorities to gain access, but Vader smashes open the door with his saber. Inside ZED is confused as to why they have come here, since it has been sealed since Padme's death, and Vader tells him that she was Luke's mother. The droid quickly realises the connection between her and a Jedi, Anakin Skywalker, and that they must have become close. Analysing the residence, the Droid finds no clues since the security recording surrounding the time of Padme's death have been deleted, but he does discover a spy droid which it tracks as reporting to someone on Vendaxa.
Meanwhile on Vendaxa, a group of people, led by a Gungan are breaking into a facility, but are fighting local creatures which are overwhelming them one by one. As the Gungan falls, Vader enters, slicing through one of the creatures, but both he and ZED are taken aback when they realise one of the group appears to be Padme Amidala. . . .

High Points : I was massively impressed by the way this story slots itself into the timeline, with Vader investigating Luke's life, trying to discover who protected and hid the boy as he grew up. The way ZED67 reveals the data, logically analysing the locations and information available as Vader has flash backs to the events the droid is revealing, is impressive. And it's really doing a great job of tying the prequels together with the original trilogy.

I especially liked the flashback that tied the slaughter of the Sand People by Anakin into the entire chain of events that led him to becoming Vader spectacular. As the memories he sees goes from him and Padme discussing the slaughter, to Yoda warning that Anger leads to the dark side, to him asking Luke to join him on the Dark Side to rule the galaxy together, to Luke falling and it becoming Padme slipping away from him. It's a beautiful sequence which makes total sense as Vader realises the path he's taken in life started here with this one action.

The use of ZED67 is also excellent, as the loquacious nature of the droid drives the story forward as Vader obviously is a man of few words, so we're following the story as the droid discovers it, and in many ways this is the droids story, but I guess "ZED67's adventures with Darth Vader" wouldn't have the same ring to it.

Low Points : The pirate attack seems totally pointless, almost as if the writers needed to put in some action to keep it Star Wars. But an encounter with some Sand People would have seemed more logical to tie Vader back to the actions of Anakin.

So what do you really think ? : This is a really solid story, well told and beautifully illustrated.
I'm not really sure I like the way that Vader is kind of sneaking around trying to discover Luke's history, but I'm definitely enjoying the ride.

Final Words : While it's obvious that it can't be Padme who Vader sees at the end of the issue, the Star Wars universe is diverse enough that there's loads of options of what or who it could be, that it still keeps you guessing, so the cliffhanger holds.
I guess we'll see next issue.