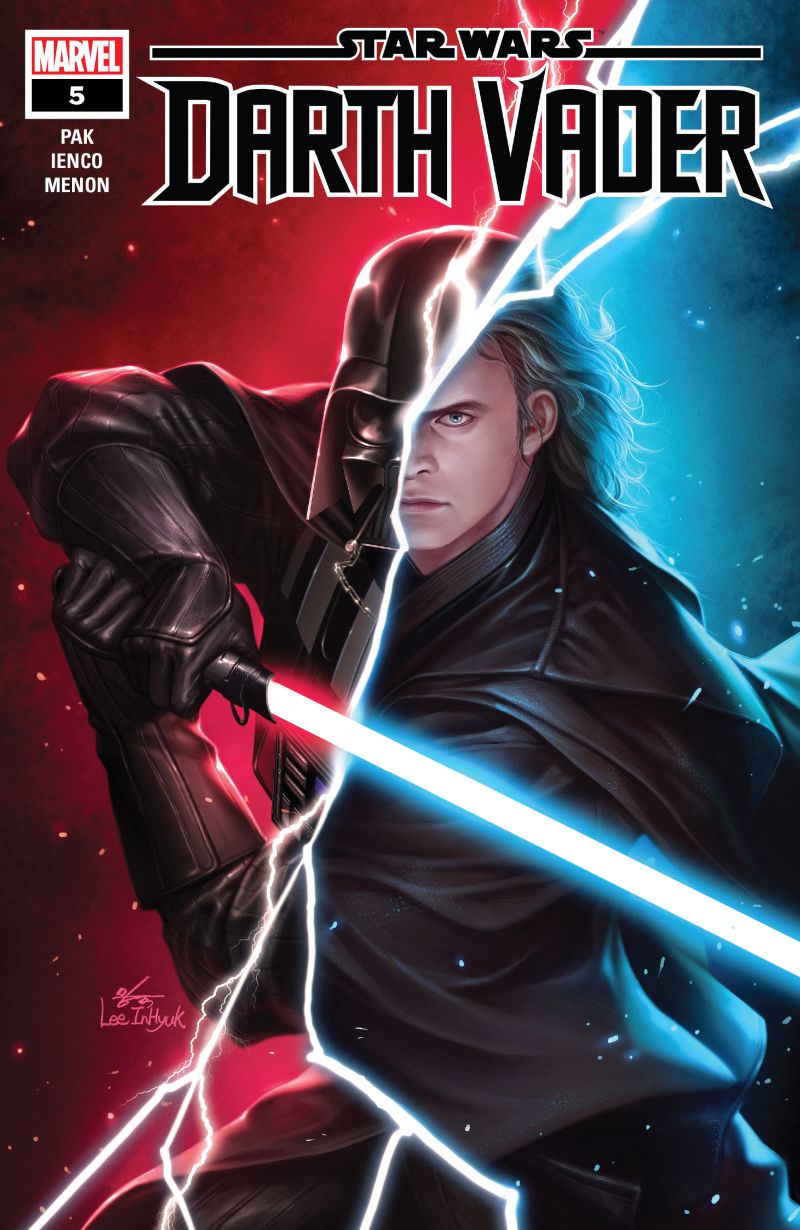 What is it ? : Vader enters the tomb of Padme Amidala, seeing the sarcophagus itself with a carved image of his wife, he remembers both her being playful in the fields of Naboo and choking her on Mustafar.
Zed-67 scans the inside of the sarcophagus, and detects a Med Implant that he traces back to it's origin point, showing a hologram starmap. Sabe spots this and heads outside, gathering the other handmaidens, but Zed orders the Death Troopers to stop them. However Vader knocks the weapons of the Death Troopers using the force, and tells Sabe to go, to tell her friends to meet him at Polis Massa.
Some time later, Vader's Lambda class shuttle approaches Polis Massa, the base abandoned and wrecked. Zed identifies it as a former Rebel base, detected and bombed by the Empire some time ago. They exit into the base, and Zed checks the flight control systems, getting the logs of Amidala's J-Type Star Skiff, carrying Padme, two droids and "notorious" Jedi Obi-Wan Kenobi, and Vader remembers facing Obi-Wan and Amidala when they arrived on Mustafar.
He tells Vader that he cannot access the medical logs, although there's a possibility he could from the medical bays themselves, however this might prove difficult as the Amidalans have arrived in Naboo Starfighters, ARC-170's, and other vessels.
As the Amidalans attack, the Death Troopers man the Rebel defence turrets, blasting some of the attackers, and as a transport lands releasing Amidalans onto the surface, Vader grabs one of their Starfighters to crash down into the grouped soldiers, and the same anger he once had against Padme and Obi-Wan on Mustafar is released as he slashes his way through the gathered opponents until none remain standing.
He strides into the medical bay, accompanied by Zed, who tells identifies it as a maternity ward, but that the records have been destroyed, and Vader lashes out at Zed. But they discover the wrecked body of a midwife droid, which Zed accesses the memories of, and shows Vader a hologram of Padme's final moments, remarking when she calls for Obi-Wan, that he must have been important to her, which causes Vader to lash out once again destroying Zed.
The hologram continues to play, as Padme speaking of Anakin says that she knows there's good in him and breathes her last.
Returning to Coruscant Vader approaches the Emperor who asks him if he has settled his business, to which Vader responds that he has. However the Emperor is sceptical, telling him that Fear leads to Anger, Anger leads to Hate, and Hate leads to Strength, but Vader has been wallowing in grief, so needs to start again in Fear, as Force Lightning crackles around his hands. . . .

High Points : This issue seems briefer than the previous ones, and although we get Vader showing his power facing down numerous Starfighters and Amidalans, the most interesting part is him digging through the secrets of Polis Massa and finally getting to witness the dying words of Padme after she gave birth.

Low Points : Now this is the end of this part of the story, "Dark Heart of the Sith", but I didn't like the destruction of Zed-67, who was proving to be a great foil for Vader. The droid was a useful presenter of data to the reader, as his extensive records and loquacious manner led to him talking constantly. As an Imperial droid he was totally on Vader's side, for all of the slaughter he wanted to do, and I found his warnings to other people to not cross Vader to be quite amusing, as from any other character they would have been an attempt at intimidation, but from Zed it was simple communication of fact.

And while the slaughter on Polis Massa is totally in character for Vader, it is unfortunately is an impersonal slaughter, and although we see characters who might be the Handmaidens being killed by Vader, since the characters do not speak and are not named, it could be anyone, so the main Amidalan's could well survive to another day, making this all a little pointless rather than drawing a line under them and ending their story to kill Vader here.

I also found some of the facts about Polis Massa that were revealed to be remarkable, I'd always assumed that it was a small mining facility with a well appointed medical bay where Padme just happened to give birth. But that such a small facility had a dedicated Maternity ward I found odd, and that it later became a Rebel base I found stretched credibility.

So what do you really think ? : A bit of a weak ending to this arc, with an attempt to wrap everything up too neatly, with the Amidalan's slaughtered and Zed destroyed. I'd definitely have preferred Vader to be so unconcerned with the Amidalan's, that he just walked away from them on Naboo (after all they've already been waiting for their chance to strike at him for around 20 years), and with Zed as a continuing companion, as his talkative nature allowed Vader to remain silent and somewhat mysterious.

Final Words : This has been an enjoyable and interesting series, with us seeing into Vaders thoughts in a brilliant flashback format, connecting his experiences together in a fascinating manner. I'm definitely intrigued to see where the story goes next with Palpatine wanting to return Vader to a state of fear.