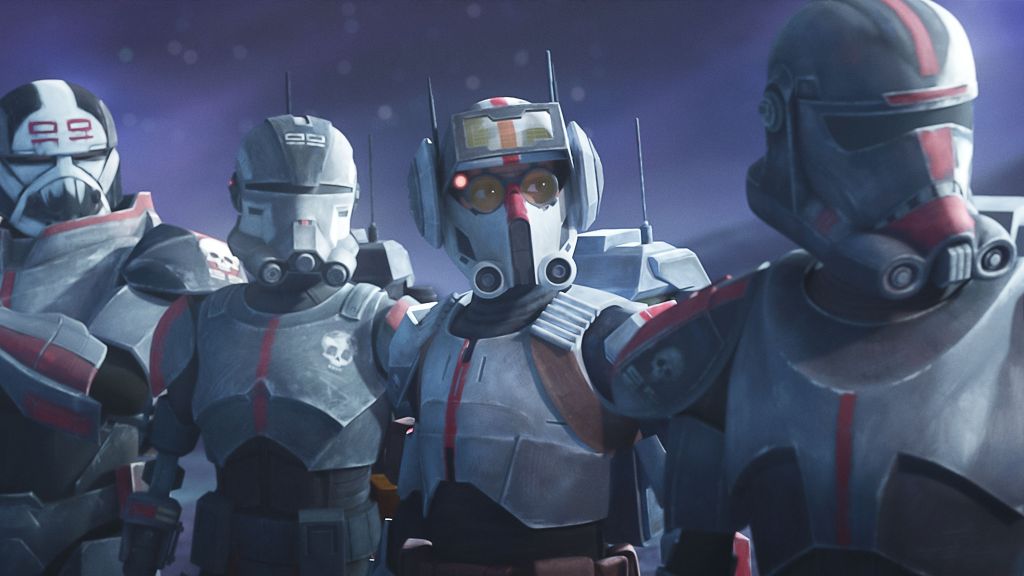 What is it ? : A crowd is gathering in the Capital city on Ryloth, and among them Crosshair spots Gobi Glie and reports it to Admiral Rampart, who is standing above with Senator Senator Orn Free Taa, General Cham Syndulla and his Syndulla's wife.
The Senator addresses the crowd, telling them that with the Clone Wars ended and the planet under the protection of the Empire, they must begin surrendering their weapons and disarming. The crowd is unhappy, but Syndulla steps forward and rallies them, telling them this is the day they've been fighting for, that the Clone Troopers have helped liberate the world, and they should trust them to protect it. As he speaks, the Senator and Admiral discuss the political power that Syndulla has, since the people of the planet trust him more than their elected leaders.
Elsewhere, a young Hera Syndulla and her droid Chopper are watching an Imperial base under the instruction of Gobi Glie, but she gets caught and taken back to the Syndulla home.
There the commanding Clone Trooper, Howser, tells Cham that he'll not tell anyone this time, but really Hera was committing a crime so should have been arrested. Afterwards Cham and his wife are becoming concerned that the Empire is hiding things from them and they instruct Hera not to get involved in any more spying on the Empire.
Cham and his wife visit one of the disarming sites, where queues of Twi'lek resistance members hand over their weapons to the Clone Troopers, Cham continues to insist this is what Ryloth has been wanting, a day when their people don't have to fight and die, but he seems less convinced than before.
Later Gobi Glie visits and asks Hera to accompany him, but she tells him that she's not allowed to spy for him anymore, but he tells her this is a simple supply run, and he'll let her pilot the ship, something she leaps at the opportunity to. As they take off, Crosshair who is watching, fires a tracking beacon onto the side of their shuttle and informs the Admiral.
Gobi and Hera travel to a nearby moon, where as they wait the Havok Marauder arrives and Gobi and The Bad Batch complete a deal for Cid delivering weapons, crates of Blasters and Thermal Detonators. Omega and Hera speak, and Omega offers to show an enthusiastic Hera around the Havok Marauder.
On Ryloth, Admiral Rampart is showing Cham and his wife around a new refinery, but they comment that it was supposed to not be a military installation, but note that it is manned by Clone Troopers and guarded by Turbolaser turrets. Rampart receives the communication from Crosshair and leaves Cham to see himself out, who is becoming disillusioned with the Empires activities.
Completing the deal, the Bad Batch leave, and Gobi and Hera head back to Ryloth, and as they come close to landing they note an Imperial ship is following them, but as they try to lose it in the canyons, Crosshair fires and destroys one of their engines, forcing them to land.
A Laat/i arrives carrying Clone Troopers who arrest the pair, and when informed that Hera has been arrested, Senator Orn Free Taa tells Admiral Rampart that this is proof of Cham Syndulla's insurrection against the Empire, but Rampart tells him that the people of Ryloth would not be convinced, as there is no direct connection between Cham and his daughters activities, but he has a plan.
Chopper informs Cham and his wife that Hera has been arrested and sentenced already, and Cham decides to rally his forces to rescue her.
They set up an ambush as Hera and the other prisoners are taken aboard an Imperial Juggernaut, and take out the escort, capturing Speeder bikes and stopping the vehicle to liberate Hera and Gobi Glie. Orn Free Taa tells Rampart this really is proof of Syndulla's rebellion against the Empire, to which Rampart agrees and signals to Crosshair, who activates his own ambush shooting Orn Free Taa in the head to frame Syndulla for it, and more Clone Troopers arrive and capture Cham and his forces, although Hera slips away.
As Cham, Gobi Glie and the other Twi'leks are escorted away, Rampart orders Clone Captain Howser to bring back Hera, which he seemingly reluctantly agrees to as he is left behind by the departing Imperial forces. . . . .

High Points : I have to admit I loved this episode, mainly for the guest appearance of Hera and Chopper. While I've been critical (and will continue to be below) of the constant use of characters from other sources, I do love Rebels, so the fact that this isn't really an episode of the Bad Batch, but a flashback episode of Rebels to when Hera was younger is fine with me.

I also have to comment on how gorgeous Ryloth looks in this episode, the Canyons, gorgeous skies, it's a visual treat and great to return to somewhere we've been in two of the other three Star Wars animated series.

Low Points : Now, I've been critical of the use of Tarkin before, as he doesn't seem to have any sensible career within the Empire, acting as a prosecutor for Ahsoka, commanding the Death Star project, building Tie Defenders, redefining contracts with the Kaminoans, etc, he just pops up wherever the writers want, rather than having a real defined role. But Admiral Rampart seems to have much of the same problem, the man who only a few episodes ago was put in charge of integrating the Clone Army with the Empire (and possibly phasing them out in favour of conscripts), is now on Ryloth opening a new Refinery and dealing with the disarming of their former allies there.
While having Rampart as the man behind everything makes a lot of sense, he really doesn't need to show up at every opportunity, as it's beginning to look like no matter where the Bad Batch go in the Galaxy, Rampart is waiting there to have his schemes disrupted.

Although I love seeing Hera and Chopper in this episode, the only reason I'm fine with this is that this really isn't an episode of The Bad Batch. The Batch themselves only show up for a couple of minutes and basically have no involvement with the plot, only being there to set up next episode when Hera will contact Omega and ask for help. But if we do count this as an episode of The Bad Batch, then the guest appearances are almost overwhelming, with Hera, Cham, Chopper, Gobi Glie, and so many other Twi'leks we've seen in the past.
My son commented that they don't count next episode though, as this is obviously a two parter, so we'll see if anyone else turns up next week.

So what do you really think ? : I really enjoyed this one, it's right back into the politics of the New Empire, exactly the kind of thing I wanted to see from this series from the start, an exploration of this time period we've not really seen before. And although it's not massively different from the stuff we've seen in Rebels, with the Empire tightening it's grip on worlds which voluntarily joined it, seeing how the Empire and it's victory in the Clone Wars is used to disarm the galaxy, and how they use the desire for peace that even these hardened warriors really wanted.
It's really quite fascinating to watch Cham Syndulla, who we've seen during the Clone Wars fighting the Separatists, and during Rebels fighting the Empire, realising that the victory he always wanted was a shallow one, and the fighting must go on, but now against his former allies. All he was fighting for was freedom for his people and peace, but he's becoming aware that for the peace he'll have to sacrifice the freedom, or sacrifice the peace for the freedom.

Final Words : Finally I must note that when we visit the Syndulla home, there's a Y-Wing crashed outside, left over from the Clone Wars. This as fans of Rebels will know is where Hera recovered a damaged Chopper from, repairing the wrecked Astromech which becomes her lifelong companion. A beautiful touch, which shows the writers remember and respect the history and mythos as much as we want them to.