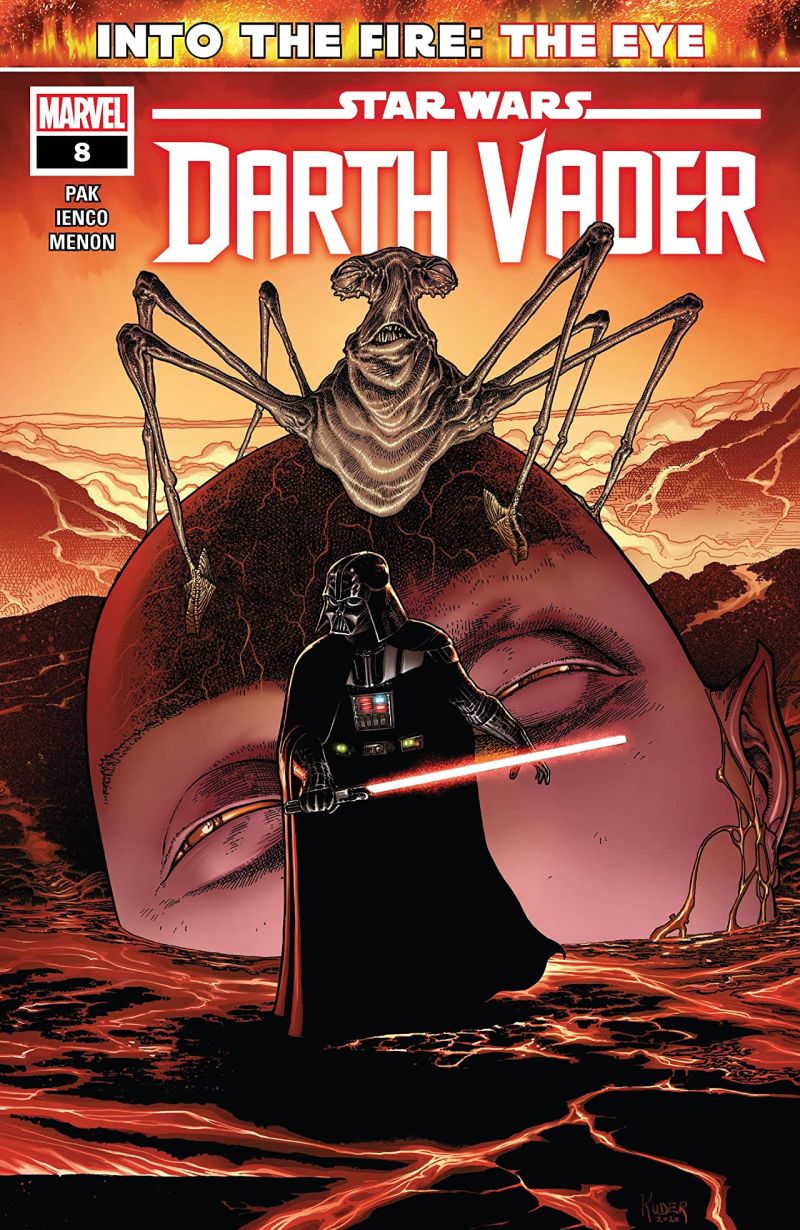 Darth Vader: Issue 8: Into the Fire Part III: The Eye

What is it ? : Ochi of Bestoon stands outside the rockfall blocking the cave which Vader entered, and taunts the Sith Lord that without his Lightsaber and without being able to use the Force he was easily defeated. But Sly Moore, advisor to the Emperor arrives with some Death Troopers to warn Ochi that if he fails to defeat Vader it will be the end of him, but Ochi responds that no one has returned from the Eye of Webbish Bog, Moore agrees to a degree, although tells him, Yet he is Vader.
Inside the cave Vader is under attack from Lava Nymph's, who spit fire at him, but he struggles onwards killing a Lava Flea and taking a piece of it's heat resistant carapace and using it as a shield from further attacks. The Eye of Webbish Bog continues to mock Vader, asking him if this is what he has chosen, or whether he has been chosen.
Seeing a doorway, Vader heads towards it, but comes under attack from a large demonic looking Roggwart, which he easily defeats, questioning the voice as to what it is that Palpatine is building, and where? But the Eye of Webbish Bog continues to question Vader, with certain carefully worded questions from his past which bring back memories, asking him whether he's searched his feelings, as he asked Luke, but also remembering questioning Palpatine about Luke, and being told the same thing, to search his feelings for the truth.
Vader reaches the Eye where it sits on the head of a giant in a lava pool, and the giant rises, handing Vader a Sith wayfinder, as the Eye tells him, you came to me for answers, and I gave you only questions, and leave you with one more, did you pass this test or fail it?
Vader leaves and returns after many years to his Jedi Starfighter, non functional but still whole sitting here for 20 years. He attached the Wayfinder to it, but as he finishes, Ochi locates him, accompanied by some combat droids, he congratulates Vader on getting the Wayfinder, but tells him that he won't escape so easily, to which Vader responds, Good, I needed more parts. . . .

High Points : The word play that the Eye of Webbish Bog performs with Vader is quite clever, as it brings him back to memories of Obi-Wan, of Palpatine and of Luke, working within the flashback format that the comic series has established. But the links here are tenuous, barely connecting to the action at all.
Although we do get for the first time to see a flashback to a memory that isn't from one of the movies, where Vader questions Palpatine about how it's possible that Luke is his, is Anakin's, son, and is told to search his feelings, something he later repeats to Luke when he questions how it is possible that he is Vader's son. Which is a nice connection, showing how at that point, even in these emotional matters he was still just Palpatine's puppet repeating his words.

Low Points : Firstly, Sly Moore just turns up and then leaves, seemingly just to give Ochi someone to talk to so we can get some exposition that the Eye of Webbish Bog is known to Ochi and is dangerous. Why else was she here? Why does Ochi turn up later with totally different companions? Why weren't these things connected together?

Also the Eye of Webbish Bog isn't a particularly interesting opponent for Vader. Where a cryptic all knowing being can be interesting in it's insight into events and characters, asking questions which really bring out their motivations and backstory. But the Eye asks bland boring questions to which seem easily answered, Have you searched your feelings? Do you choose or were you chosen? (which at least is an interesting play on Anakin being the Chosen One), What do you want? There's nothing here which helps us explore Vader as a character, which seems the entire point of the series.

So what do you really think ? : This entire issue seems to be based around a question which no one asked, where did Vader get his Sith Wayfinder which Kylo Ren retrieves from Mustafar in Rise of Skywalker.
I'd always just kind of assumed that Palpatine gave it to him, "Here you go Vader old matey, just in case you ever need to find my super secret hiding place if things go really bad with this whole Empire idea."
But instead we find out that there's some kind of telepathic Spider hiding in the exact place where Vader fought Obi-Wan, which distributes Wayfinders to anyone who can reach it's fairly inconvenient location.

Final Words : It looks as if we're returning to one of the more interesting elements of this series, with Vader returning to his Jedi starfighter left behind since Revenge of the Sith. Here his talents as the child who built his own Podracer can come back into play as he fixes up this abandoned old ship, it's really taking Vader back to basics which is something I've been enjoying, as Vader and Anakin always seem to be two different characters, and I love to see the writers building links between the two as he falls back on his old skills.