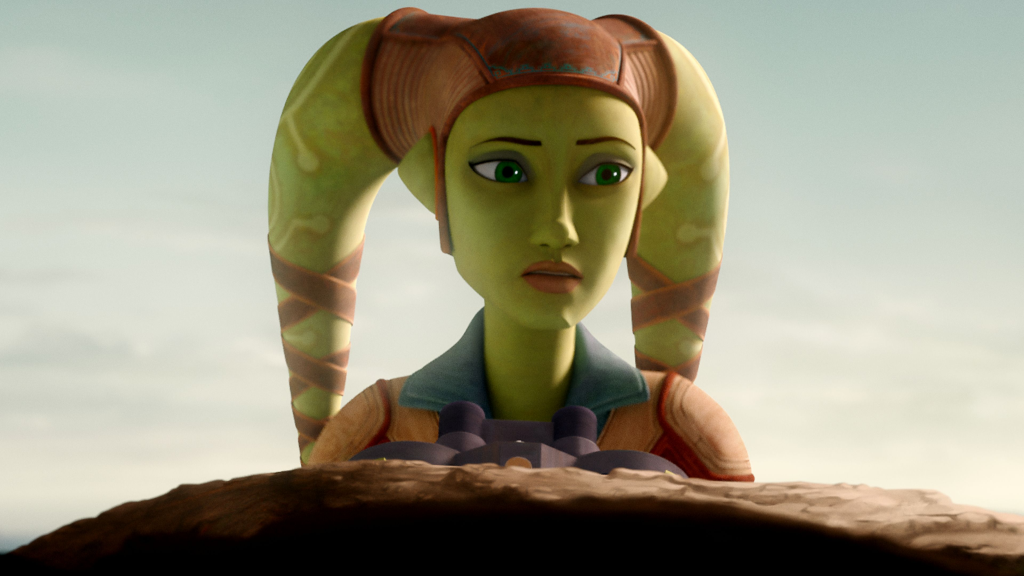 What is it ? : Admiral Rampart speaks to the captured Cham Syndulla and his wife, promising to return their daughter to them safe and sound if they reveal where she is hiding., but Cham's wife refuses on their behalf. As they leave, Rampart commands Clone Trooper Howzer to find all of Syndulla's supporters, something Howzer recommends against, as news of this might turn the population against the Empire, offering instead to personally find Hera Syndulla, but Rampart tells him another squad is already doing that.
In the mountains near her home, Hera and Chopper monitor Crosshair and his squad searching her home, so she heads for her fathers hidden base instead. There she sends out a message to Omega and The Bad Batch, offering them a reward for returning and helping rescue her parents.
On the Havok Marauder, Hunter listens to the message, but decides that it's too dangerous, but Omega convinces him to reconsider as after all, isn't helping people what soldiers do.
They return to Ryloth and set the Havok Marauder down in the hidden landing platform to meet with Hera, she explains what has happened and reluctantly agree to see whether there's anything they can do to help, telling Hera that they can't make any promises.
They take up a position in the mountains and observe as Rampart makes a speech to the people of Ryloth, telling them of the betrayal of Cham Syndulla and how he attempted to assassinate Orn Free Taa who is expected to make a recovery. Afterwards Howzer expresses that this doesn't match the facts and he believes Orn Free Taa was shot by someone else, but Rampart tells him to obey orders.
As they watch, they spot Crosshair, but the Bad Batch are spotted by a Probe Droid, and although they destroy it, it manages to send a transmission back and Crosshair is alerted to their presence. Back at the Landing Platform, Hunter reminds Hera that he didn't promise anything, and that with the Empire and Crosshair alerted, there's no way they can rescue her parents. He tells her that they'll take her offworld to safety, but afterwards Omega tells Hera if they can come up with a plan Hunter will be convinced as it will make tactical sense.
Together using Hera's local knowledge she and Omega come up with a plan and convince Hunter to try to rescue her parents, that the two of them will infiltrate the new refinery along with Chopper to draw forces away from the Capitol where the Syndulla's are being held so the Bad Batch can make a rescue attempt.
Chopper sneaks into the refinery to shut down the power to the defence turrets, but is spotted before he can do it, so Hera and Omega steal a Nu-Class attack shuttle and strafe the Generators, allowing the Havok Marauder to join the attack unmolested. Forces are summoned from the Capitol, but as Crosshair and his forces are about to board a shuttle to leave, he realises that the refinery makes no sense as a target for Hunter, and as he watches the Clones all leave the Capitol he orders his squad to remain, but they are seen by Howzer who rushes inside the building.
Hunter, Echo and Wrecker manage to reach the Syndulla's and liberate them, but just as they are about to leave the building, Howzer arrives and warns them there is an ambush being prepared outside. They are sceptical, but he convinces the Syndulla's that he came here to free Ryloth and that hasn't changed. Cham attempts to convince him to join them as the Empire will know he has disobeyed orders, but he refuses to abandon his fellow clones, telling them that Orn Free Taa has a personal shuttle within the building they can use to escape.
Howzer heads outside and when surrounded by fellow Clones, he throws down his weapon, explaining that he cannot be part of the subjugation of Ryloth, and asking them if they will stand with him and several also throw down their weapons, but all are arrested and led away.
Back at the hidden landing platform, the Syndulla's are reunited with Hera, and Hunter refuses any payment, telling them they'll need it to liberate their world, but Elina Syndulla tells them a war is coming and it will be their war as well.
Back at the Capitol, Crosshair asks for permission to deal with The Bad Batch, and Admiral Rampart gives the order to hunt them down.

High Points : I have to say that Chopper was fantastic in this episode, having learned to understand him over the course of Rebels, it was great to hear his commentary as he panics, exclaims disbelief when given orders to do dangerous things, and so forth. He does seem the one character, since he can be easily understood who is allowed to exclaim hesitancy when he's asked to risk his life.

I also enjoyed the back and forth of the plot, as Hera and Omega come up with a decent plan to distract the Empire away from the prisoners, but Crosshair realises there is no tactical value in this, but Howzer turns the tables once more. The characters are all acting intelligently, and all their actions make sense, rather than the way sometimes Star Wars just makes characters act like complete idiots so the other side seems clever in comparison. This leads to an extremely satisfying story to watch as each side tries to outsmart the other.

Low Points : While Howzer turning on the Empire makes a lot of sense, it does raise questions as to the efficiency of the Behaviour Chips. We've seen Clone Troopers turn on Jedi friends, and slaughter Padawan who were nothing more than children, but now Howzer is turning against the Empire because of his friendship with Cham and his family. Unless this is an ongoing plot thread where the Chips are losing efficiency as time goes on, leading to the need to replace the Clone Troopers with Storm Troopers (which makes a lot of sense), I'll be seriously annoyed if some Clone Troopers are resisting the effects just so a story works.

At the end of the episode, Crosshair is ordered to hunt down the Bad Batch. Really, only now? Hasn't this already happened? As I'm sure he was told to catch them at least once in previous episodes, or were those orders cancelled due to his failure before?

So what do you really think ? : Not a plus or a minus about this episode, but I must note that I'm getting more intrigued by what happens to Cham Syndullas between now and Rebels. As he seems such a loving character, but when we see him first in Rebels he's willing to betray his own daughter for victory over the Empire. So what turns him so bitter? Presumably the death of his wife, but this remains to be seen, so I really want to see that story to fill in the gaps.

Final Words : A decent enough story, but it kind of felt like a filler episode, as I don't believe that Ryloth and the Syndulla's can become a large part of the series (as they're destined to be in Rebels), so while it's been an interesting little pitstop, it seemingly doesn't take the overall story anywhere.