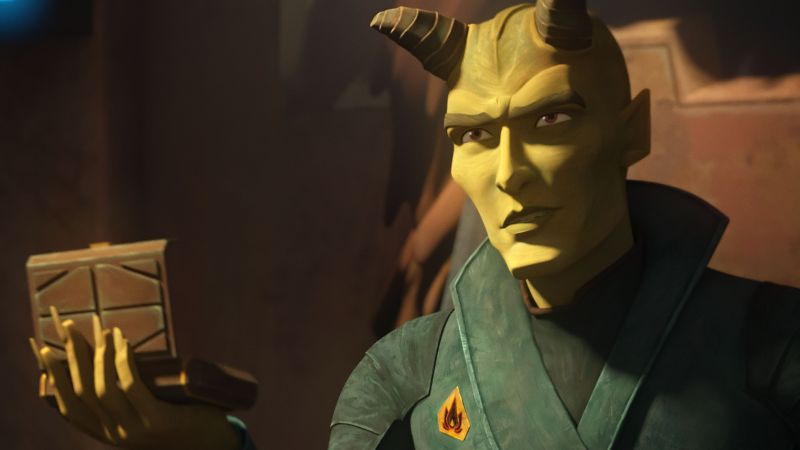 What is it ? : The Bad Batch return to Ord Mantell after a mission and notice the place is overflowing with security guards, especially Cid's cantina. Inside they find that it's been taken over by a Devaronian called Roland Durand, who was the customer of the heist of the lizard at the beginning of Battle Scars (episode 7).
He tells them he's taken Cid's business, but if they need work they should speak to him, but Hunter decides it's time to leave and move on. As they head back to the Havok Marauder Omega asks what happened to Cid, and thinks they should help her, as she helped them, only for Cid to emerge from their ship saying at least one of them cared about her.
She tells them she has a plan to get back her place from Roland by stealing some Spice he has stored in her Cantina for trading with the Pykes. Hunter isn't keen on helping, but Omega talks them into it, and Cid reveals that they can sneak into her place through the abandoned mining tunnels beneath Ord Mantell.
They enter the tunnels, and Cid advises them to be silent, as there is an infestation problem within the tunnels, and although Wrecker drops his torch creating a bit of noise they manage to reach Cid's Cantina and steal the containers of Spice while Cid's colleagues Ketch and Bolo steal the Lizard, Ruby, from Roland causing him and his men to chase them through the streets.
As they leave with the containers of Spice, Roland and his men return, and notice the Spice is missing and give chase through the Mines, which causes enough noise and disturbance to wake the infestation, which turn out to be Irlings, small flying creatures which bite and make webs. As they flee, The Bad Batch drops the containers into the nest, but manage to evade Rolands men and escape.
Ketch and Bolo are captured by Rolands men, and Cid's involvement is discovered, which Roland reveals to the Pykes as they arrive, but they aren't interesting in his problems, just wanting their Spice.
As sounds of combat come from her Cantina, Cid thinks the Pykes have dealt with Roland, and takes the Bad Batch to reclaim her place, but the Pykes are waiting there, and demand their Spice, holding Roland prisoner, and taking Omega to enforce the Bad Batch's compliance with their demands.
Taking the Havok Marauder to an opening in the mines, Cid and Wrecker rappel down into the nest and begin finding the containers and winching them back up to the ship, but as they get the last they awaken the nest again and begin getting swarmed by the Irlings. Tech realises that the creatures are sensitive to light, and drops a flashbang type device down into the nest, which stuns all the creatures, allowing Cid and Wrecker to escape with the last of the Spice.
Returning to the Pykes, the have Omega returned to them, and Cid is allowed to reclaim her Cantina, but the Pykes seem prepared to execute Roland. But Omega convinces them this would cause problems with his family, so isn't worth the effort, so they simply sever one of his horns instead.
Cid offers to buy the first round at her Cantina, and Hunter asks Omega why she helped save Roland, to which she tells him that the lizard Ruby is fond of him, so he can't be all bad.

High Points : This is going to be a strange plus point, but this is the first episode of The Bad Batch which hasn't had a character from some other Star Wars media turn up and is totally stand alone. While there's appearances from other episodes, which are totally legitimate, and I was suspicious that the Pyke leader was going to be someone we'd seen before, but nope, no guest appearances at all, and it's only taken 13 episodes. I suppose after episode 11 really was all guest appearances (Hera Syndulla, Cham Syndulla, Chopper, Orn Free Taa, Gobi Glie, etc, etc) with the Bad Batch themselves only appearing for a few moments, it was about time.

Apart from that, the story is fairly enjoyable, it's competently scripted, and the standard remains high, but there's nothing in particular to make this episode stand out.

Low Points : While it makes sense that The Bad Batch should be building a support network if they're to survive. Cid has always been in it for the money, even abusing Omega's natural talents to profit by gambling on her success in games of strategy. So it really feels odd that the writers are making this person the Bad Batches most trusted friend.

And I did find it really odd when they face down the Pykes and Omega gets taken as collateral, that the Pykes tell Hunter that this isn't a negotiation, and Hunter doesn't point out he's not a negotiator, he's a soldier. The Bad Batch supposedly took down armies when they were operating as Clone Force 99, but now a handful of thugs are too much for them.

So what do you really think ? : So, a few things which occured to me when watching this episode. Firstly how Spice can basically be Space Cocaine, and the writers don't really treat the people who deal in it as bad people (like Roland in this episode, you'd expect them to treat a galactic cocaine baron as a bad guy, not just as a bit of a naughty scoundrel).
And when they drop the containers of Spice into the Irling nest, I was really reminded of the story of the Cocaine Bear (smugglers dropped a package of cocaine from a plane to avoid detection, and it was found and eaten by a Bear, which shortly afterwards died of a massive overdose, but in the short-term must have been the most confident bear in the world). I thought that was going to be a plot element as this nuisance, suddenly became a real threat once it was hopped up on Spice.

Final Words : The Bad Batch has gotten me trained so well to expect guest appearances, that it was distracting for there not to be one. I spend much of the episode looking at characters and trying to work out if I knew them from elsewhere. So the Pyke leader, but nope. I even was wondering if Roland turns out to be Vizago from Rebels, as Vizago famously has a missing horn (but Vizago loses his in an early appearance in Rebels), and Roland has his cut off by the Pykes, so again nope.
It's strange how something that annoys me, itself causes annoyance by it's absence as the series seems to just have the habit of having guest stars show up.