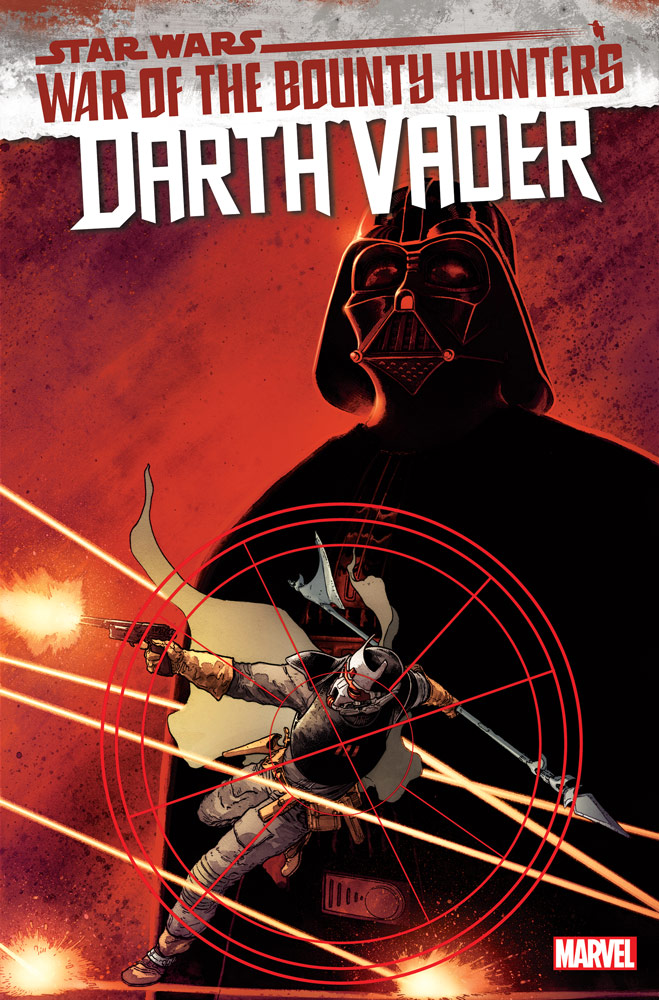 What is it ? : We pick up this issue with Ochi of Bestoon on a rooftop on Arkanis observing a cantina and communicating with Vader. He says he will search around the back for information, but Vader commands him to just enter through the front door..
So Ochi kicks in the front door and instantly gets in a fight, but ends it by showing the occupants he works for Vader, and then brandishing a card with the Crimson Dawn symbol on it and asking them what it is.
Later Vader and Ochi arrive at the residence of Bokku the Hutt, having discovered the card is an invitation to the auction of Han Solo's carbonite frozen body. Bokku confirms this, and is then commanded to join the auction by Vader, when he points out he cannot win against Jabba's riches, Vader tells him that is the point. It will make him look weaker, until Jabba will not suspect him of being capable of striking against him which is when he will be able to strike "Like a coward in the dark!".
To which Bokku replies, "But a victorious coward?".
As Vader and Ochi leave aboard Vaders Lambda Shuttle, Vader throws Ochi out, commanding him to find out who else Bokku is working with. Ochi asks how to contact Vader, and is told to not trouble himself with that, Vader will find him.
Wagon leave Bokku's palace, with masked and robed figures riding beneath them, and Ochi snipes them, killing one and injuring the other, telling the injured one that he just wants to talk.
The injured one asks why then he killed the other if he just wants to talk, and Ochi says that he didn't need more than one of them, to which is he is told is going to be tricky and a large group of identical figures reveal themselves around him, saying when he messes with Bokku he messes with all of Crimson Dawn.
Ochi tells them that confirmation that it was Crimson Dawn is all he was looking for and opens fire, but their numbers look to be overwhelming for him, so he reveals that he works for Vader, which only draws laughter from them. He tells them Vader cannot be defeated, asking them if they are more powerful than a Sumna Verminoth? To which they respond Yes.
He is incredulous, telling them that he just killed four of them himself, and maybe could even take the rest of them, but they question whether he could take another dozen, another hundred, another thousand?
That individually they are weak, but together they are impossibly strong.
Ochi says that there are only ten of them, so lets do this, but they asks him not to fight, but to join them.
Back on the shuttle Vader is watching as Ochi refuses, telling them his master is coming, and indeed Vader does return to Ochi.
The Crimson Dawn tell Ochi that Vader isn't here to save him, but to test him, and his only chance is to join them, but Ochi opens fire once more, and after a while lies on the ground exhausted, but surrounded by the bodies of the Crimson Dawn.
Vader approaches on foot, and Ochi tells him that Bokku is working with the Crimson Dawn, but realises that Vader already knew that.
He tells Vader that he realises Vader wanted to see what he'd do, that he doesn't have to worry. But Vader responds, "Until you strike, Like a coward in the Dark."
A point which Ochi denies, saying that he always serves the most powerful, so as long as that is Vader . . . . But the two are surrounded by a horde of more Crimson Dawn troops, and they begin fighting shoulder to shoulder.

High Points : I really liked the inference at the end that Ochi will serve Vader loyally until someone more powerful comes along. Suggesting that Crimson Dawn might be right and that their numbers could overwhelm Vader, and provide a new master for Ochi to serve. However, the true meaning I think is that Ochi doesn't serve Vader at all, he serves Palpatine, who as has been revealed is powerful enough to break even Vader.

Low Points : The rest of the issue is pretty weak, with no flashbacks which have been the main way this series has added meaning to the story. Even if this issue mainly follows Ochi rather than Vader, so it makes sense that we don't see Vader's flashbacks, it would have helped add some context and background to Ochi is we'd seen some of his, so we could understand why he always follows the most powerful master.

We also could do with a bunch of context for what Crimson Dawn is doing. Last time we saw them was back in Solo, and Maul and Qira were leading them. We know Maul died at the hands of Obi-Wan on Tatooine, so presumably Qira now leads them. Solo led us to believe that she never left with Han and took up the reigns of command so that Maul and Crimson Dawn wouldn't hunt them down and kill Han. But with Maul dead, there's no such threat there, so now that Han has come into her hands, frozen in carbonite, why is she holding an auction for his body? Seemingly Crimson Dawn believes now in power through numbers, and all dressing in identical masks and robes, which seems very different from just being a criminal enterprise filled with individuals.
So. . . . what's going on?

Also, why have we jumped back in the story to before the auction? Last issue had Vader arriving at the auction where Bokku and Sly Moore were both bidding against one another, but both for Vader. But now we see Vader arranging for Bokku to go to the auction.

So what do you really think ? : I'm not a fan of this issue, it jumps back in time for no reason, Crimson Dawn seem to behaving without sense or reason, and it's missing the signature storytelling system used by the series, the flashback.

Maybe if I was reading all of the other comics which comprise this story ark, "War of the Bounty Hunters", it'd all make more sense. But honestly, you shouldn't have to pick up lots of side issues for this to make sense. They should add to the experiences, but not be required by it. Very disappointing.

Final Words : I'm really starting to believe that this series is just stumbling on now, I think it was planned up until the end of the "into the Fire" arc, telling some backstory of Vader. But now it's just unfocused and serving no real purpose except as his further adventures.
It's teasing something interesting with Vader apparently trying to kill Luke to avoid being replaced by him, but obviously that can't work out, so apart from us witnessing the revelation which later leads to Vaders redemption, there's not actually much more this comic series can hope to show us, and in spectacle I don't think it's going to top Vader riding into combat against Palpatine on the back of a Summa Verminoth. So it's not even got that going for it anymore.