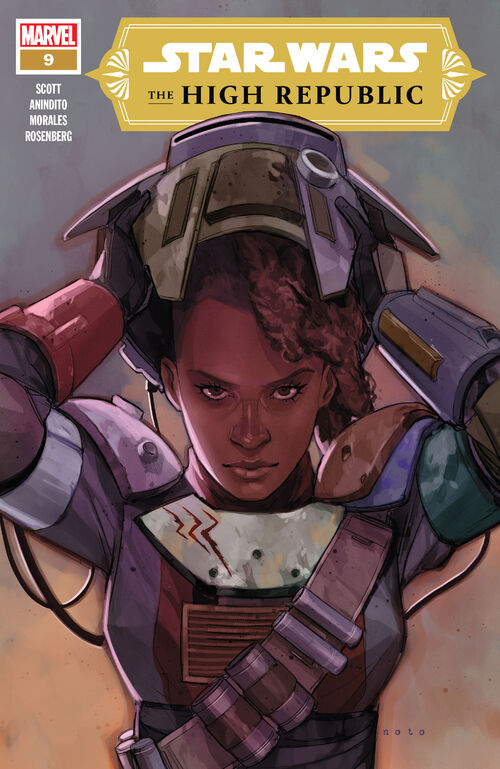 What is it ? : Orla Jareni is aboard her starship when she comes under attack from a Nihil vessel, piloted by a war painted Keeve Trennis and Terec.
We flashback to a meeting on the Starlight Beacon, where Marshal Avar Kriss argues with the Jedi Council that they should be allowed to act against the Nihil, but is told that they must wait and the Jedi must act together. They have discovered that the war against the Drengir was initiated by the Nihil who seeded the plant creatures across numerous worlds to distract the Jedi so they could attack the Republic fair on Valo.
Back at the battle, the Jedi Starcruiser Ataraxia joins the fight, putting the Nihil vessel at a disadvantage against the fighters it launches. Keeves vessel is joined by other Nihil vessels, and she destroys one of the Jedi Vector fighters before the Nihil attach chains to her ship and escape the battle against the superior Jedi forces.
As they travel through Hyperspace, Keeve thinks about the things she didn't want to do, she didn't want to destroy a Vector fighter, even though it was remotely piloted by Ceret back on the Ataraxia, and she hopes the Nihil won't realise their ship was scavenged from the Nihil base on Grizal, and that they'll think the distress call was genuine.
They set down in a smoky polluted city, and a Nihil questions them as to what tempest they belong, and Keeve flashbacks to her briefing, and tells the Nihil that she is with Etya's tempest, aware that Etya can't verify or contradict her story as he was killed some days before.
The Nihil whips her with an energy whip, and Keeve remembers being told she must respond as a Nihil not as a Jedi, so she fights back, grabbing the Nihil and choking him. When a disembodied head in a large battle droid body wielding an axe and sprouting laser cannons comes out and tells her to stop.
He intends to test her, handing Keeve his axe, and telling her that to prove herself she must execute the prisoner, and the Nihil bring out Myarga the Hutt. . . .

High Points : Now I'm searching for things to like in this issue, and of course it is beautifully illustrated, and the designs are lovely. Orla's starship looks very Star Wars without looking like anything we've really seen before, being based around a triangular body. And I really like the look of the Nihil who is testing Keeve at the end of the issue, a head and torso floating in a glass tank on the front of a massive battle droid. He just looks cool and powerful, although makes me ask why this group of savage raiders seems to have superior medical technology to anyone else and turned an apparent cripple into a powerful warrior.

Low Points : High Republic continues from last issue in not really wanting to show us the story, but instead tells us about it later. So last issue we skipped 3 months of war, and now we skip the preparation for the mission, instead getting it piecemeal as we continue.
For example, it'd have been nice if we'd known before that the Jedi had captured some Nihil starships, they've had a couple of opportunities, and could have easily gotten it at any point, setting this situation up. But nope, instead we just get told about it later.

This set up seems to be so we're surprised and shocked that Keeve now seemingly has become a Nihil and is firing on her former friends. But she's the hero of the book, so it's obvious to absolutely everyone that she's on a mission and is pretending. If they'd set it up that it was Sskeer, that might have been believable, as he's verged on the Dark Side before, but not Keeve who's just too goody goody.

Also the Nihil are going to have to have one hell of a payoff, since here we have a savage raider group who destroys and kills everything and everyone, but they've got their own cities, their own vessels, and seemingly their own cybernetic surgeons to rehabilitate the wounded, crippled and disabled. It seems less like raiders and more like a legitimate interstellar government.

So what do you really think ? : Like the Vader comic I reviewed a couple of days ago, High Republic seems to be getting further and further from the ideas which initially made it good. Keeve Trennis was an interesting and different protagonist as she seeming paid attention to those around her and gained insight from the weak and powerless individuals she met, from the children who aided her against the Drengir initially, right back to the first issue and the diminutive Ximpi.
So while the other Jedi we're seemingly too powerful to notice those they claimed to help, Keeve related to them and was given insight by them, making her more effective than her masters.

But this is all in the past now, and Keeve is just another Jedi.

Final Words : How quickly a comic can turn around and go bad, High Republic was full of interesting ideas until only a couple of issues ago, I really hope they turn things around as its storylines have become terribly familiar and routine.