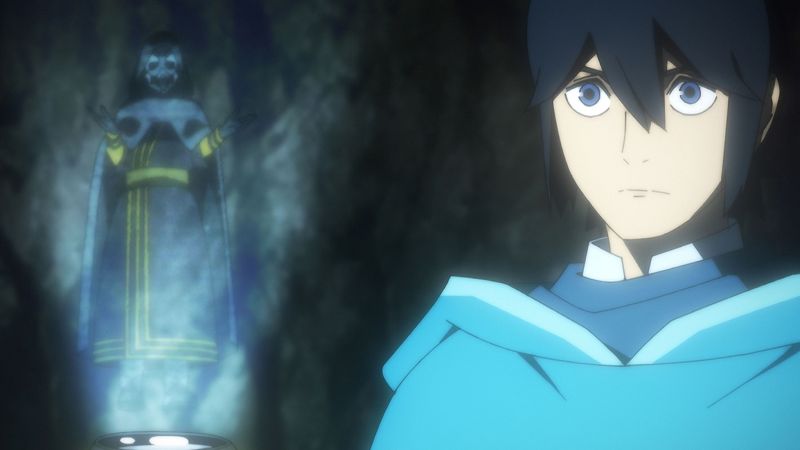 What is it ? : We are told that many generations have passed since the Jedi were guardians of the galaxy, and that the ruler of the planet Hy Izlan is trying to bring them back and has had the ancient weapons of the Jedi, Lightsabers manufactured and sent out a message offering them to any Jedi who come.
A starship approaches the planet, arriving at a station built into an orbiting asteroid, the pilot, Ethan, enters the station and finds a group of other people waiting for him. He activates a hologram of the message, telling them he has no master, but he is trying to be a Jedi. They likewise show they also have received the same message, and say their host, the Margrave hasn't shown his face yet.
They discuss his masked visage, and wonder if he really is going to offer Lightsabers, or whether this is a trap to lure Jedi to their destruction. They hear laughing, and a massive Droid enters, telling them the Margrave will arrive soon.
On the planet below, a series of massive trebuchets fire grapples into orbit, grabbing rocks out of the planets rings and dragging them down to the surface to be mined for Kyber Crystals.
A young girl, Lah Kara, and her droid 99-99 "Four-Nines", watch this process and then head off on a speeder bike to her fathers workshop, where he is finishing making the lightsabers for the Margrave. He explains to her the crystals in the sabers he has made are tempered, meaning they adapt to the weilder, changing colour and length to suit them, Kara switches one on, and the blade is clear. Her father tells her that it will change colour as she learns to use it, as she has the potential, but is untrained.
Outside a ship lands, and the Sabersmith bundles up the lightsabers he has made and gives them to his daughter, telling her to take them to the Margrave in the Aerial Temple above.
She exits and leaves on her Speeder bike, while her father tries to delay the Jedi Hunters who have arrived to take the sabers and deny them to the Jedi. She flees on her Speeder bike but is spotted by the Jedi Hunters, but they are delayed by an blast caused by the Sabersmith causing his forge to explode.
Kara zips through a forest, but she is pursued by one of the Hunters who shoots at her, she ignites the lightsaber, and pilots her Speeder bike in reverse, so she can parry the blasts he fires at her.
As they exit the forest, they reach a frozen lake, and Kara drops to the ground, and slices through the Jedi Hunters speeder bike as he passes her, before leaping back on her bike and escaping.
She later arrives at a Spaceport on the edge of the Frozen lake, where she bargains with a pilot droid to take her to the Aerial temple which it grudgingly agrees to.
They land at the Temple and are met by the waiting people, and Kara tells them that her father has been attacked by the Jedi Hunters and offers them the Lightsabers if they'll help him. The group take the Lightsabers, and ignite them, but all except Ethans turns red, revealing that these are not Jedi, but Sith who have taken their place and seek to stop the Margrave from re-establishing the Jedi Order.
The massive droid opens up, revealing it was a mecha suit, and the Margrave was always inside, and Kara also Ignites her clear Lightsaber and a fight breaks out. The Margrave uses the force to snatch a lightsaber from the hand of one of the Sith, and upon holding it the blade turns green, and between the three of them they manage to defeat all of the Sith except one, whose lightsaber turns purple, revealing that he was overwhelmed by the darkness of the Sith around him. Kara's saber has turned visible, and the Margrave tells the victors that the other Jedi are still out there, and that he is sorry that he couldn't help Kara's father, but he needs her help in re-establishing the Jedi order, and the four leave on the Margraves starship to seek the lost Jedi. . .

High Points : The idea of Tempered Lightsabers that change to suit the wielder is an interesting one, and really helps the story along, allowing the revelation that the waiting Jedi are actually Sith. This is kind of how we always thought Lightsabers should work, with Vader and Palpatines being Red because they're evil, and not as modern lore has established, because they tortured and bled their Kyber Crystals. I definitely like this version more.

The fight in the forest is really quite excellent, with Kara putting her Speeder bike into reverse, so she can see her pursuer and parry his blaster bolts, followed by a gorgeous scene on the surface of the frozen lake.

And although they're quite silly, I adore the giant Trebuchets firing grapples into orbit and then pulling rocks out of the rings for mining. Super silly, but really cool to see, creating a unique thing for this world, reminiscent of oil rigs pumping away in the desert, a real world thing but with a Star Wars spin on it.

Low Points : Why did the Margrave need a giant Mecha suit he doesn't use in combat, could he just sit in the next room and watch the Sith/Jedi on camera? As they don't seem to explore beyond the main room. It's really only so they can go, Surprise, it's not a droid, its a suit.

So what do you really think ? : This one was pretty good, but feels strangely out of place, since it's set in the distant future of the Star Wars galaxy, long after the order has been destroyed in Order 66, and apparently Luke and Rey's attempts at re-establishing the order all came to nothing, as there are only a few scattered Jedi across the entire galaxy, and those appear to be self taught if Ethan and Kara are anything to go by.

Also because this is a one off, it feels weird it seems to be setting up a time period and ongoing storyline with the Margrave, Ethan and Kara searching the galaxy for lost Jedi.

Final Words : I've heard people saying this is the best of the series, and I can definitely see why they would say that, as it's got great animation, some good action, and a few decent ideas in here. But out of all of the episodes so far, it's the most conventional, not trying to be anything different than normal, and that feels a bit of a disappointment after the others.
They at least were packed with new concepts, throwing ideas at the wall and seeing what sticks (and very little of it did stick). But The Ninth Jedi just seems to play it safe, and for that doesn't do what it does particularly well. We get a good Speeder bike chase, followed by an average lightsaber battle. The only interesting new idea is the adapting Lightsabers themselves, and the way they reveal the Sith ambush, reveal that Kara truly is a Jedi, and that one of the Sith isn't that bad after all.
An interesting idea, but one I don't see being of any particular use outside of this one very specific story.