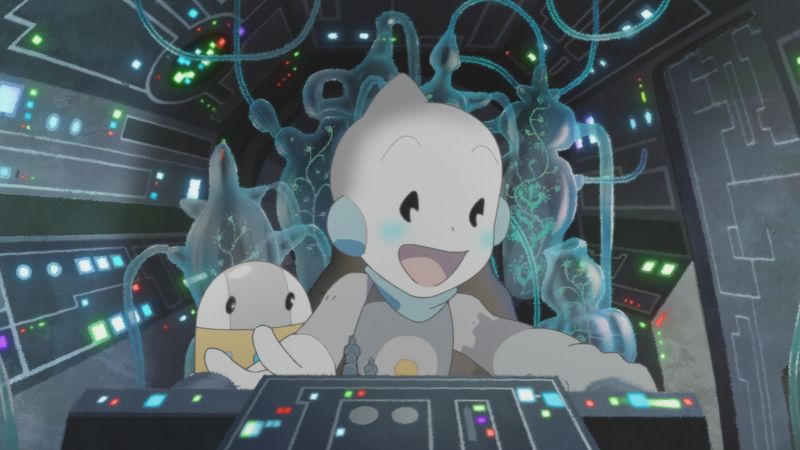 What is it ? : A bearded scientist, Professor Mitaka, finishes working on a childlike Droid, T0-B1. The modifications seem to be to emulate human growth, as T0-B1 asks if he is taller now, and the professor sends him to get another droid called C03.
When he finds him C03 has been drawing doodles on the walls of AT-AT's and Tie Fighters, and T0-B1 tells him they can play lightsaber later. Mitaka tells them that he has told them repeatedly to not go into the basement, and to get on with the work.
They begin working on calculations needed as Mitaka plans on terraforming the desert world they are on, but later T0-B1 tells that he wants to become a Jedi, and doodles images of X-Wings and Tie Fighters imagining himself as a Lightsaber wielding Jedi fighting the Empire.
The professor reminds him the galaxy is full of danger, but as T0-B1 presses that something is pushing him to become a Jedi, something he can sense, Mitaka tells him that to become a Jedi he must build a Lightsaber of his own and that there is a Kyber Crystal somewhere on this planet which he must find.
That night T0-B1 constructs a Speeder Bike, and heads off with C03 to search for the Kyber Crystal, and after a long and fruitless search he realises that the Professor told him never to look in the basement and that is the only place he hasn't searched yet.
Heading down into the basement, he finds a T-16 Skyhopper, and climbs inside. Playing at being a Jedi he uses the comm-system to call for other Jedi to come help him, before Mitaka finds him and uses the force to open the vessel to remove T0-B1, who realises that Mitaka is a Jedi himself.
Meanwhile in space an Imperial Star Destroyer picks up the comm-signal calling for Jedi to rescue one of their own, and inform their captain an Imperial Inquisitor who decides to investigate.
Mitaka senses that the Empire is here, so instructs T0-B1 to shut down and hides him behind a wall, telling C03 to look after him. . . .
T0-B1 awakens at some point later, finding their home wrecked, and all of the other droids destroyed, before finding a grave outside that C03 has buried Mitaka in, and he cries for his master, before resolving to finish Mitaka's work.
He rebuilds and repairs the other droids and restarts Mitaka's terraforming work, and they eventually cause plants to begin growing in the desert, before rain begins falling. As he realises that the Professors dream has come true and the rain hits him, a Kyber Crystal emerges from his chest, and he finally can construct his lightsaber to become a Jedi.
But the activity on the planet draws back the Inquisitor who arrives in a Tie Advanced, and asks where T0-B1 came from, if Mitaka had hidden him, as the Inquisitor had sensed something here, and wants to know if there are more hidden Jedi. The two ignite their lightsabers, but T0-B1 is outmatched, until he gains a vision of Professor Mitaka who tells him he is proud of what he has accomplished, and knights him as a Jedi Knight before T0-B1 returns to the battle.
The inquisitor slices off one of T0-B1's arms, and is surprised the Jedi is a Droid, asking him who he is, to which T0-B1 replies "Toby", and then slices off one of the Inquisitors arms, killing him.
After the battle, T0-B1 and C03 depart the now green world in the Skyhopper, with T0-B1 saying that he plans to take the Professors research to other worlds that need it, because helping is what Jedi do.

High Points : Again we get a very different and this time whimsical story, in western terms this is Disney/Pixar does Star Wars, the tale of a Droid that dreams of being a real Jedi. And for what it is, it's entertaining enough.
It teases that the Professor has some dark secret hidden in the basement, and I imagined lots of failed T0-B1's down there broken and non functional, the results of the Professors experiments to make a real boy. But instead no, the danger in the basement is the commlink on the Skyhopper which T0-B1's innocent nature causes him to summon the Empire.

Low Points : There isn't a lot of substance to this story, and timewise it doesn't make a whole load of sense, for example T0-B1 searches the entire planet, which is illustrated by him repeatedly searching the same rocks over and over, but this doesn't take him years, it seemingly happens within the same day.
And the Inquisitor doesn't realise that T0-B1 is a droid until he severs his arm, when T0-B1 is obviously a droid, where it would have made more sense for the Inquisitor to realise that T0-B1 is a droid, but not believe until he fights him, that T0-B1 is a Jedi. But he senses that he's a Jedi, but is blind to his droid nature?