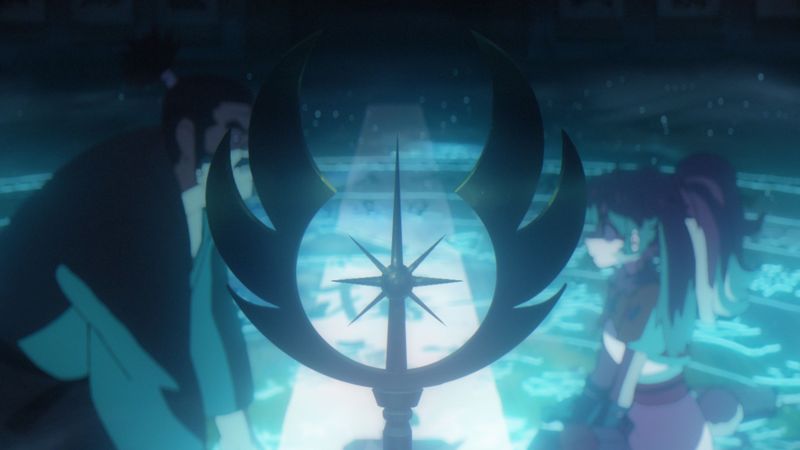 High Points : Okay, this was really good, telling a complete tale within its 20 minute run time, and everything just feels so Star Wars, despite having a real Japanese feel to it. The Empire is so recognisable, exploiting the planet and its people, with even mention of how it's building it's military but there is no war any more.
And the oppressive nature of the Empire is shown again and again, mainly by the massive Imperial Star Destroyer hovering over the city, this massive vessel hanging over everything else which happens, a symbol of the Empires control over everything. But also by the Imperial compound, it's severe technology completely at odds with the nature around, and so polished and advanced compared to the run-down lived-in nature of the Tao city around it.

I also was very impressed by the inherent racism shown by characters, Yasaburo showed it at the beginning, even referring to Lop as "it", but he grows beyond that, but the human centric nature of the Empire as Ocho joins it, leads to her rejecting Lop as her sister, telling her how she can't understand, and isn't really part of the family.

While we grow to dislike Ocho through the episode, her racism towards Lop being one reason, but also her turning against her father and traditions. But the episode does a great job of showing us how the Empire is so successful, as it's actually quite understandable that Ocho makes her decision, the massive Star Destroyer overhead is a symbol of the power the Empire projects, compared to the handful of men her father has at his command. The Empire offers the galaxy, while her father offers only tradition. And the costs for this don't come from Ocho, the slavery shown in the episode isn't of her people, it's of aliens she can make herself think of as lesser beings. This episode shows the colonial nature of the Empire more effectively than perhaps anything else I can think of.

Finally the imagery is fantastic, from the above mentioned Star Destroyer which we see from various angles, as it occupies the sky above them, but also the worn nature of the city, looking more like a 21st century cyberpunk style than Star Wars, but this just gives Tao it's own feeling, a world with a Japanese heritage, advanced to the 21st Century, but then the Empire arrives and forces it's own constructions around what already existed. So we've got Imperial archtecture, alongside 21st Century, alongside traditional Japanese, it's a wonderful mashup which feels realistic.

Low Points : The one weakness of the episode was the animation however, there are sections of the story which have long periods of people talking, and the camera just moves from face to face, and the simple animation of the mouths here, which isn't much more than them just opening and closing, really shows its weakness, highlighted by these segments. It wouldn't have been too bad if the camera had roamed, showing us the scenery around the characters as they talked, but instead we just get pretty simplistic shows of faces with flapping mouths.

So what do you really think ? : I really liked this one, it feels so right, a planet exploited by the Empire, the inhabitants getting used to meeting aliens for the first time, as Yasaburo doesn't even think of Lop as a person at the start, although he rapidly adapts and comes to love her as his daughter. The clash between tradition and advancement, played out between the three lead characters, and the split this causes in their family, with Ocho feeling betrayed by her fathers actions, and him feeling betrayed by her willingness to abandon tradition, which is hugely important to him.
Personally I want to see more, but am happy with this being a one off, as it's a lovely little gem to treasure.

Final Words : So only one more episode to go, and I personally think I've just seen the highlight of the series. Which I'm surprised I haven't seen discussed much.
Most people I've seen reviewing the series rated The Ninth Jedi as the best of the series, an episode which had some good ideas, but made no effort to fit within the Star Wars universe. But this exists within Star Wars, but tells a unique story in its own way.
Maybe because it comes so late in the series, and I've read that many people had abandoned Visions after a few episodes as just not their thing, something I can understand, but saddens me as this is one of the best pieces of Star Wars I've seen recently.