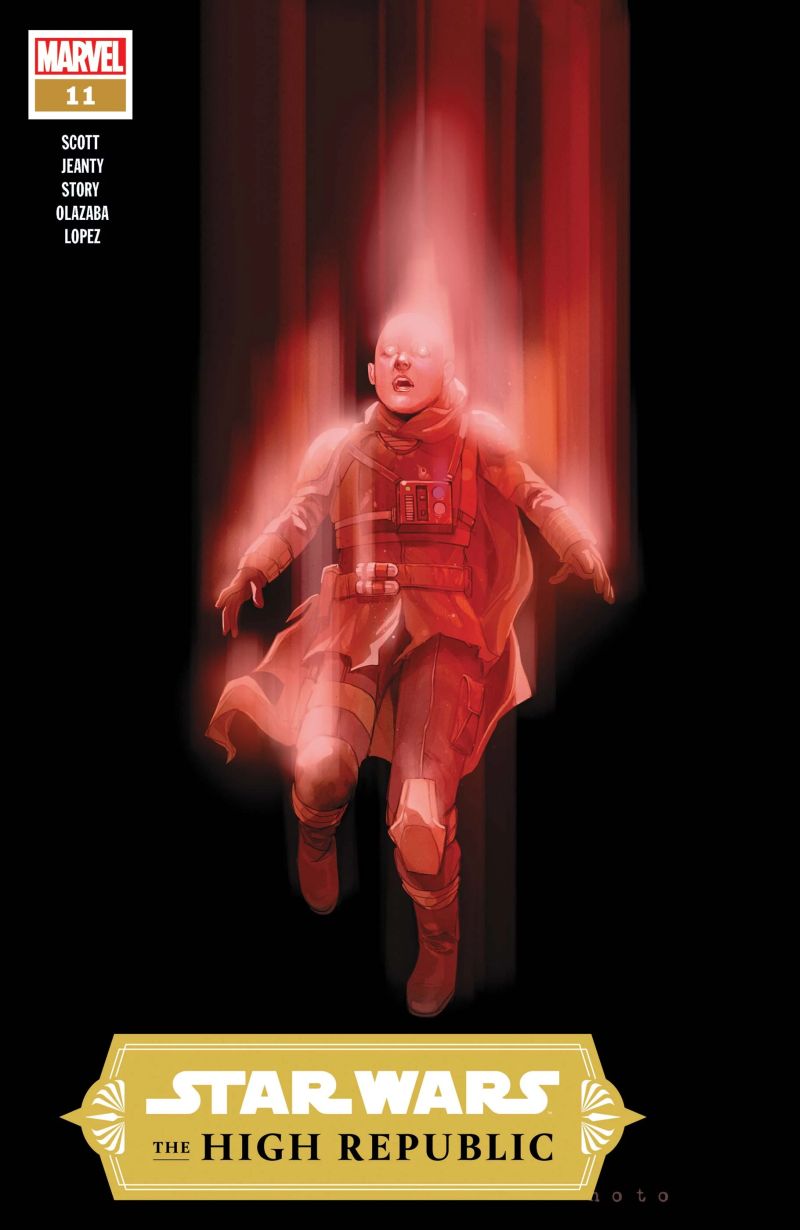 What is it ? : We pick up with Keeve Trennis seeing space warped around her as her perceptions are changed by whatever Nihil Tempest Runner Lourna Dee had in the box she opened. She is trying to get away from whatever it is, as her companion Terec is being "turned inside out". In reality she is crawling on the floor, tears streaming from her eyes, as the other Tempest Runner, Zeetar prepares to kill her, but Lourna Dee has picked up Keeves Lightsaber and reveling in the power of the blade, she slices through Zeetars weapon, telling him to remember why they're doing all this, that they need the Jedi alive so they can see if what happened on Grizal was a fluke.
Across the galaxy, Ceret is screaming aboard the Jedi Cruiser Ataraxia their skin calcifying. Skeer and Avar Kriss debate what is happening and that they must help Terec and Keeve, so Ceret programs the navigation systems to get to their bond twin before placing themself in a hibernation trance.
The Ataraxia arrives at Xais, but is intercepted by Nihil Fighters, and Skeer and Kriss launch in their own starfighters to defend their vessel. But Kriss becomes worried as Skeet won't let the Nihil retreat, and remembers that Yoda told him that once you walk the Dark Path, it is forever in your heart, as Skeer leaps out of his Starfighter to engage Nihil with his lightsaber.
Lourna Dee orders her forces to retreat and is mocked for being afraid by Zeetar, but she says it is experience as she has fought Skeer before, leaving the other Tempest Runner to face off against the Trandoshan Jedi Master.
Zeetar blasts Skeer with missiles, knocking him off his feet, but the Jedi recovers, and slices Zeetars armoured droid suit in half.
They reach Terec and Keeve, finding Terec in an extremely bad way and Avar Kriss realises this is Lourna Dees work, and spots her watching from the ramp of her starship as it lifts away. But Kriss is determined that the Tempest Runner not escape and will reveal what she has done to Terec, so Kriss reaches out with the Force grabbing the fleeing Starship . . . .

High Points : So at least this issue we get more than one scene and we move the story forward, but this creates a problem of its own, as seemingly the Ataraxia arrives at Xais almost instantly, when they're nearby but don't know where the Nihil base is.
The most interesting thing in the issue doesn't happen on Xais though, and the writers are trying to make a lot of interesting mystery around what's going on in the scenes on Xais. But what interested me, was as they examine Ceret on the Ataraxia, they realise that this isn't the same as what happened to the bond twins when they were effected by the Drengir, but an absence in the Force, much the same as Skeers ongoing problems.
Now this is probably connected, as we now discover that Skeer faced off against Lourna Dee once before, and that she is the one with the creature in the box which is effecting Ceret/Terec, so in all likelihood this will lead to a cure for Skeer, or perhaps a more interesting story where Jedi lose their connection to the Force, but somehow remain Jedi.

Low Points : As mentioned above, the writers seem to think that the mysteries being revealed on Xais are interesting, but they really aren't as they're not providing any contextual information to build these mysteries.
The creature in the box we don't even get to glimpse, so have no context for what it is. Lourna Dee mentions events on Grizal, but we're not given any context in what events, when, or even who was involved. Lourna Dee has encountered Skeer before, but we don't know where or what happened (was this when she was believed to be killed? was this on Grizal, so is related to his loss of powers?). The writers believe that just hinting at these things will keep us interested, but just these tiny crumbs of information aren't intriguing, they're frustrating without more to go on.

The Nihil Tempest Runners are spoken of in the story as these powerful beings, but out of the only three Tempest Runners in the Nihil forces, two of them are here facing off against the Jedi, and one is completely defeated while the other runs away. These don't seem like cunning adversaries who can challenge the Jedi, when only two Jedi Masters defeat and scare them away.

We're also seeing just what we've seen before, Skeer being all angry so Avar Kriss is concerned he's going all Dark Side, Ceret and Terec being effected by their pair bonding, etc. There's little new here to keep us interested, just the same things they went through against the Drengir, but with a newer and still less interesting enemy.

So what do you really think ? : While the writers are introducing some potentially interesting ideas into the story, from what I've seen, they're not going to do anything interesting with them. So where there's a potentially interesting concept about the Nihil Tempest Runners levelling the playing field with the Jedi by stripping their powers away, and the Jedi having to cope with trying to keep their ideals without their magical abilities.
Instead I have the feeling that the story will just wave this away, and within two issues Terec/Ceret and Skeer will be back to total normality again as the Jedi discover what's in the box.

Final Words : We're still not getting any of the interesting stuff which the comic had introduced in its early issues, and we're just getting action scenes, which really don't work as well on the page as they would in an moving format. Where the comics could triumph is by exploring characters and ideas, but it's seemingly abandoned that in exchange for spectacle.