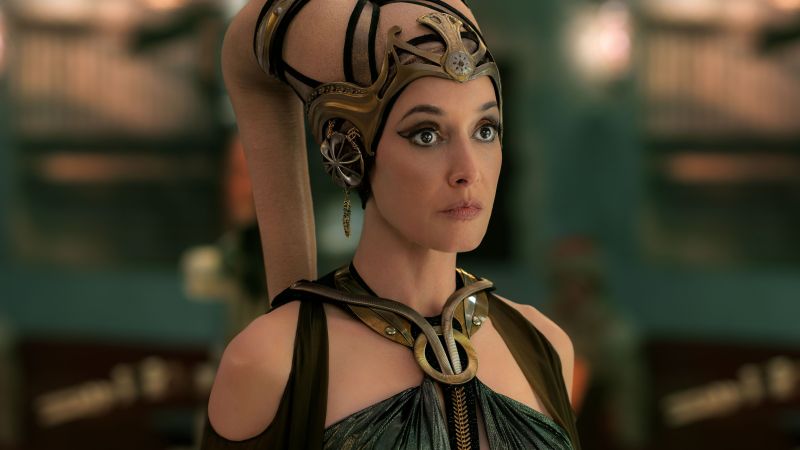 Chapter 2: The Tribes of Tatooine

What is it ? : We begin with Fennec Shand returning to Jabba's Palace with the assassin she captured in the last episode in tow. She and Boba interrogate him in the throne room, but he refuses to speak throwing an insult at Boba, so Fennec flips the switch to drop him into the Rancor pit, as the massive door to release the Rancor grinds open the Assassin panics and puts the blame for hiring him squarely onto the Mayor of Mos Espa. But when the door has fully opened there is only a small rat inside, and Fennec tells him the Rancor is dead.
Boba, Fennec and the two Gamorreans with the Assassin in tow return to Mos Espa and visit the Mayor, the receptionist is rude and asks if Boba has an appointment, and when Boba begins to anger the Twi'lek majordomo from the last episode emerges telling him that the Mayor is busy.
Boba barges through regardless, and the Ithorian Mayor has the assassin executed, thanking Boba for bringing him in, as the "Order of the Night Wind" are not allowed to operate outside Hutt space, offering Boba the bounty for the assassin. Boba responds that he isn't a Bounty Hunter, but will take the payment as the tribute that is owed him. The mayor warns Boba that being Daimyo is more complicated that being a Bounty Hunter, pointing him towards sanctuary to find out what he means.
Boba returns to Sanctuary, questioning the owner, the Twi'lek Garsa Fwip, who explains that the Twins have laid claim to their cousin Jabba's territory, and everything falls silent as a loud drumming is heard outside.
Boba emerges from Sanctuary, and watches as slave carry a platform around the corner holding two entwined Hutts. They demand that Boba hand over Jabba's holdings, but he tells them he legitimately claimed them from Bib Fortuna and their claim is invalid. The two sides face off, but the Hutts back down, revealing they have a warrior of their own, a black haired Wookiee, and they warn Boba to sleep lightly.
Back at the Palace, Boba returns to his Bacta tank, and dreams of his time with the Sand People. After killing the beast he gained some respect from them, and they began training him as a warrior. With a training gaderffii stick he trains to fight in their style, repeated failing and picking himself up and trying again. While they are training, the Sand People are attacked by a Repulsorlift Train that travels through the desert, and a number of them are killed. Boba asks for a gun, and tells the leader that he will return by morning, and is allowed to leave.
A small desert cantina is being harassed by a Nikto biker gang, who threaten a young couple. Boba enters and fights his way through the gang, and then proceeds to steal their speeder bikes, returning to the Sand People with them. He gifts the Speeder bikes to the tribe, and begins training them on how to ride them, and how to jump between fast moving objects, setting up an ambush for the train.
The next time it rockets past, he has set up snipers to take out the window gunners on the train, and he and some of the Tuskens board the train from their speeder bikes. Fighting their way along, they eventually reach the control room, but the droid refuses to help, and Boba has to shut down the engines, crashing the trian into a sand dune.
They take the occupants prisoner, and they are Pyke spice smugglers. Boba tells them that the dune sea is Tusken ancestral territory, and in the future if they wish passage they will pay a toll fee to the Tuskens, before releasing them to walk to Anchorhead.
He explains to the leader of the Sand People, that they now have access to the technology of the offworlders, and that they can claim back their world as they also have knowledge of every grain of sand in the dune sea.
The Tuskens make Boba part of the tribe, giving him a gift, a lizard that leaps into his nose, and guides him through a vision trip into the desert. When he returns he has a branch in hand, and they remove the lizard, teaching him how to make his own gaderffii stick. He then joins the tribe in a ritual around the fire, as he and another Tusken raider work through practice moves with their gaderffii sticks, and more and more of the Tuskens join in until the entire tribe is echoing Boba's moves. . . .

High Points : While again the stuff in present day (Yes, I know both time periods are "a long time ago") isn't that interesting, mainly consisting of taking the assassin to Jabba's Palace, taking the assassin to the Mayors house, and then going to Sanctuary to find out what's going on and confront the Hutt twins. It does keep the story unfolding and setting up what's going to happen.
But the flashback stuff is brilliant, even if it could be said that it's a total rip off of Dune. The integration of Boba into the Tusken tribe is interesting, and then the action when they raid the train is absolutely amazing, with the Tuskens really coming across as decent warriors in their own right against better equipped opponents.
There's also a bunch of laughs in this episode, the training sequences, both Boba's with the gaderffii stick, and the tuskens with the speeder bikes, are filled with funny moments, and the lizard spirit guide leaping up Boba's nose is hilarous as he thanks the tribal leader for it, then apologises "I think I swallowed it" in his New Zealand drawl.


Low Points : Since I enjoyed this episode a whole load, there's not much I'm going to complain about, but in the format of choosing something, the returning characters making the universe small problem I've spoken about last episode and throughout the Bad Batch and The Mandalorian, continues here.
Apparently the Cantina that Boba visits and fights the Nikto gang is Tosche Station, the place Luke mentions "I was going to go to Tosche Station and get some power converters". And the couple the gang harrasses is Camie and Laze, two of Lukes friends from cut scenes in "A New Hope".
Now I'll give them a pass on this as it's a deep dive to recognise two people from cut scenes, but it remains an indication of the underlying problem.

So what do you really think ? : I loved this episode, now I am a big fan of the Tusken Raiders, so hearing some of their background, remembering before the Dune Sea dried out, was brilliant for me. But there was a load of action to support all of this introduction to their history and culture.
The ritual they perform at the end of the episode reminded me of the Maori Haka, and it makes me wonder if Temuera Morrison had some influence on this?

Final Words : With Boba grabbing power in the present day, and building influence and power for the Tuskens in the flashbacks, I wonder if these are connected. As in the present Boba looks weak compared to what we saw of Jabba, as he only has himself, Fennec Shand and two Gamorreans (oh and 8D8). With Hutts, Assassins, the Mayor, and many more aligned against him. So will that be the surprise when they try to depose him, that he leads an army of Tuskens, warriors toughened by the desert to become the backbone of his empire (we're really ripped off Dune now!).