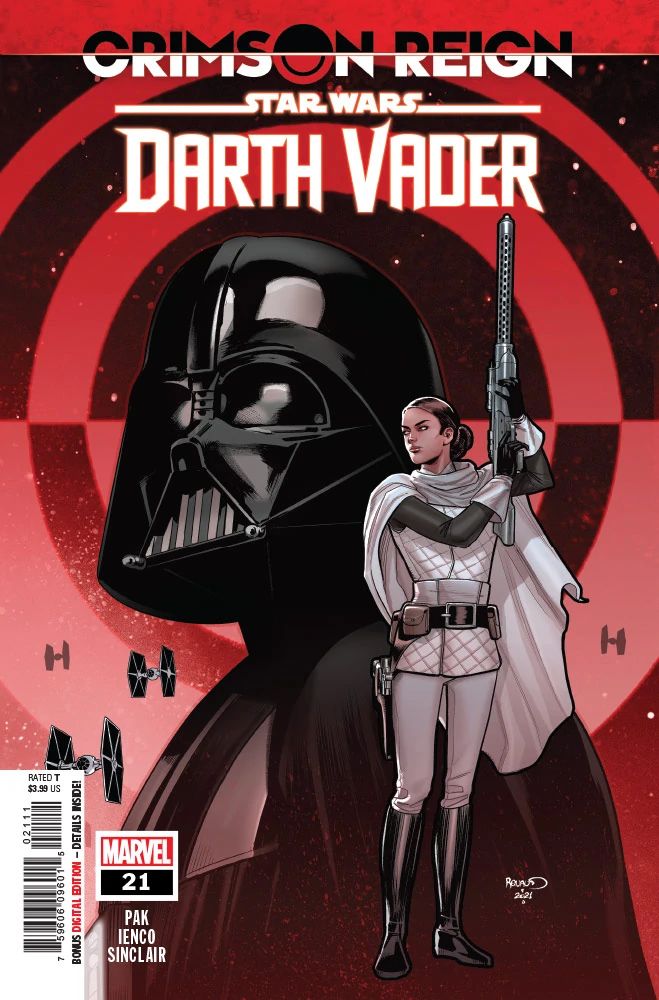 What is it ? : Sabe and ZED-6-7 have captured Sly Moore and Ochi of Bestoon, they fight back but she easily disables them. She reveals she planted the list that Vader is using to hunt down members of Crimson Dawn, and that it's a hit list of people she wanted disposed of. Ochi comments that Vader is aware its a fake list and is looking into what connects the targets, something which will lead back to Sabe.
Questioning as to what Vader really wants, Moore tells her that he has mentioned that he seeks order, so she decides that she wants to use him to spread chaos, telling Ochi to turn the Empire against itself.
Ochi visits General Romodi who is burying in space the soldiers killed as members of Crimson Dawn, revealing that he has investigated them and found that they definitely weren't members. Ochi also discovers that they once served together on a mission to kill Amidalans, while making it clear to Romodi that no matter how loyal or good his soldiers are, they are disposable to Vader.
Next he returns to Vader to inform him of the connection he has found, and the Mercenaries and Revengers he has gathered are beginning to show the strain, as the Mercenaries are only too happy to kill anyone for money, but the Revengers are beginning to question who they are killing and for what reason.
They are sent to the next name on the list, an Imperial Lieutenant Grapa, only to find him protected by a large number of Romodi's Imperial Sentry Droids, and they discover him torturing civilians. The Revengers realise that they're on the wrong side, and as Vader questions the Lieutenant, one of them shoots and kills him before he can reveal too many details of the mission against the Amidalans.
Vader realises someone informed Romodi of this mission, and turns on Ochi who flees in his starship back to Sabe on Naboo, only to be followed by Vader.
Vader tells Ochi and Sabe that he knows their plan to use him, but he will use them, and takes control of Crimson Dawn from her. . .

High Points : The story is moving along at a great pace, with the Crimson Dawn plan to control Vader formulated, taking place and then failing all within a single issue. Romodi is turned against Vader, the Mercenaries and Revengers fall out, and Vader reveals he knew Ochi was a member of Crimson Dawn all along (although how, we are never told).

Low Points : But for all it's speed, it's perhaps too fast to make sense, or make good use of what it's doing. For example it introduces an army of Droids protecting Grapa from Vaders forces, but they are defeated in a single frame. The Revengers realise they've been used and turn on Vader, but he ignores this and just moves on to Ochi. It's be really nice if they'd use the story they've got before moving on. While the story moves forward, with the Revengers realising they've been manipulated and Vader is no hero, there's no emotional impact to this and nothing really happens.

So what do you really think ? : This is beginning to feel a lot like the latest issues of The High Republic comic, where they suddenly moved the comic onwards as they were running out of issues to tell the tale and just wanted to wrap things up. There's definitely three more issues scheduled for release, so I don't think that's what's happening, although I must note that the Crimson Reign storyline is scheduled to end next issue.

Final Words : There's nothing really that good in this issue, it just pours its storyline out, without exploring any of the ideas, just desperate that you'll be impressed by seeing all these characters together, not by how they interact or how the story weaves an interesting tale. Some issues of investigation while Sly Moore and Ochi turn the Empire on itself with subtle words and manipulation could be interesting, Palpatine and Vader have never seemed like good leaders, so seeing how their underlings could be manipulated against them and against one another to introduce chaos to the Empire would be a great story, they have power, and rule by fear, but that control could be shown to be fragile.