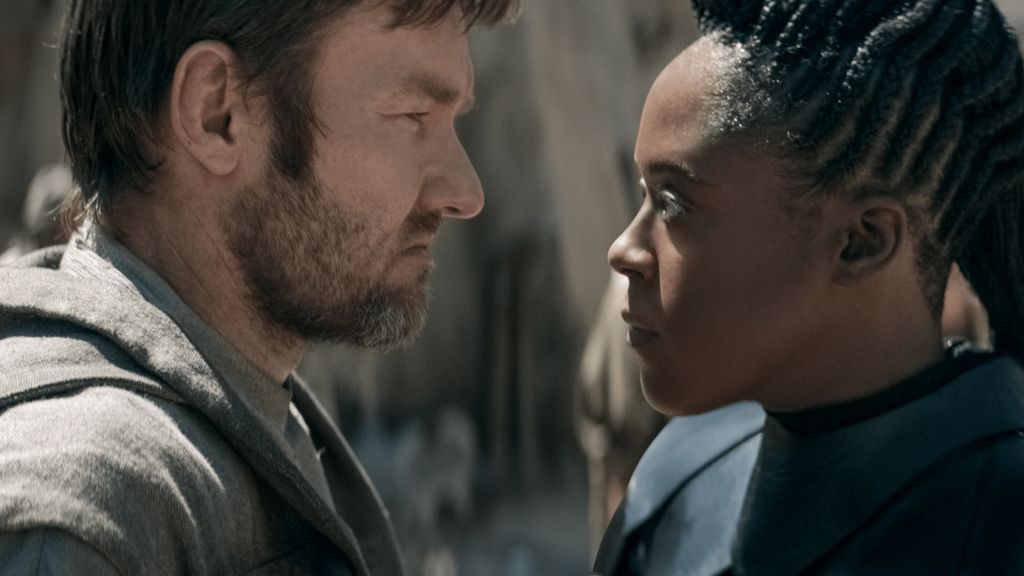 High Points : A great start to the series, but as a first episode it has a lot of heavy lifting to do to set up the storyline for the season, so does seem a little slow at times. That said, the repeated routine of Kenobi's day butchering the Krayt Dragon works, showing how the plot is slowly coming into his life.
I really have to complement the actress who plays Leia in this, she is brilliant as are the lines she delivers. This is perhaps a little more Carrie Fisher than Leia, brilliantly smart and snarky, a slight level of viciousness the character hasn't shown before, but this could just be character growth as Leia becomes tempered by her Fathers influence.
Speaking of her father, Jimmy Smits is again absolutely wonderful as Bail Organa, and comes across as a fantastic father, telling his daughter off and trying to teach her, but all the same secretly proud of her and who she is becoming. He does look a little older now, having lost some weight and perhaps looking a little frailer than when we last saw him in Rogue One. But this makes not one jot of a difference, and given that he never appeared to age between when I first became aware of him in the late 1980's and the later 2010's, it had to happen sometime unless he'd made some deal with the devil for unending life.
All of these actors returning, from Joel Edgerton as Owen, Ewan McGregor as Obi-Wan, through to Jimmy Smits as Bail, all make this really feel like a continuation rather than a reinvention of Star Wars.
Also worth mentioning is the presentation, it really looks lovely, with the scene with the Jedi temple at the beginning looking up to movie standards, right through to how gorgeous Alderaan looks. It really takes the advice to Gamesmasters from the Star Wars RPG to heart, where it advised you to always make things bigger for Star Wars. If you were going to have a Temple at the top of a waterfall, then it should be a Temple populated by weird aliens, which is at the top of a mile high waterfall. So in this, Obi-Wan does just work cutting up meat, he works in a camp cutting the meat from an enormous Krayt Dragon which is larger than the camp itself creating a sheltering wall.
it's also nice that John Williams has returned to create the Obi-Wan theme for the series, which while I adore the music in The Mandalorian, this feels so much more Star Wars, making me instantly feel more at home with this story.

Sometimes these days Star Wars can seem a little small, with everything tying together too neatly (the Marshall in The Mandalorian having Boba Fetts armour and Anakins Pod Racer engine for example). But I did really love that the T-16 that Obi-Wan buys from the Jawa, and then leave for Luke, is probably the one we saw him playing with in the garage in A New Hope. It's small enough and subtle enough that I enjoyed it, but it doesn't slap you around face with a "Hey remember that think, well here's it's backstory." like we'd had so often with the Bad Batch, etc.

Low Points : As said above, the story can seem a little slow at points, and we'll see if that's a feature of the series stretching a movie idea out to six episodes, or whether it's just because this episode has to set up the series so is doing a lot of work.


So what do you really think ? : I really enjoyed this, it looked great, it sounded great, it was acted great, I hope it continues into greatness.

Final Words : Although they released the first two episodes together, at this moment I've only watched the first episode so I've no idea what happens next. They've totally taken me by surprise by making the plot seemingly about the rescue of Leia, as the trailers made me thing it was mainly going to be a Tatooine story about protecting Luke. This is far more epic than I was expecting, and that's a far more pleasant surprise for me, may they surprise me more and more.
So I'll be watching the next episode later, and writing up my review tomorrow, and we shall see if it gets even better (I've deliberately been a bit harsh in my marking for this episode, to leave myself somewhere to go if it gets better).