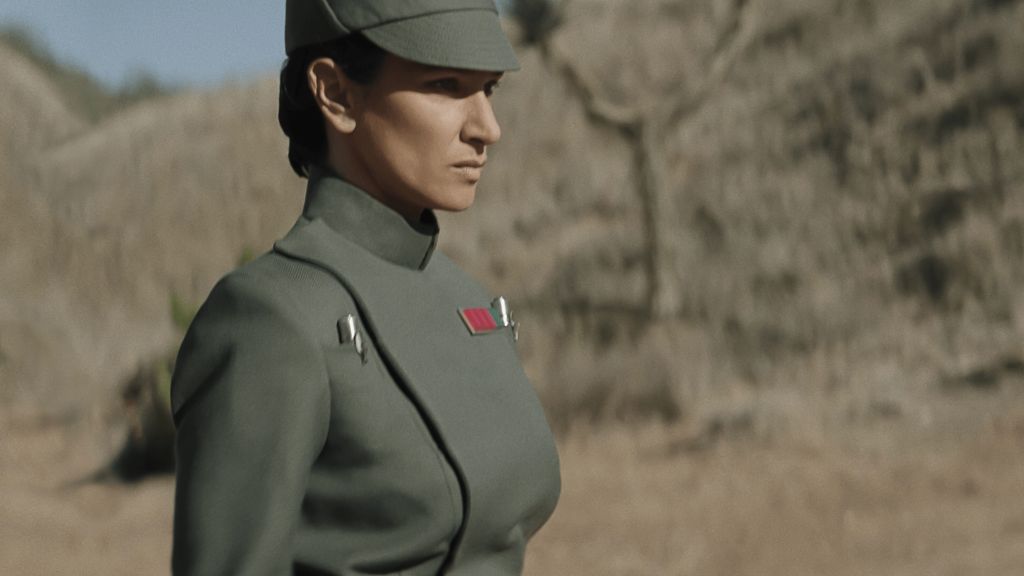 What is it ? : Vader awakens in his chamber and is assembled and put into his armour, then speaks with the 3rd Sister who informs him Obi-Wan is still alive, and that the Grand Inquisitor has been incapacitated. Vader tells her that he knows what she wants, and she must prove herself capable if she wants to be the new Grand Inquisitor, but if she fails she will regret it.
Obi-Wan meditates on the cargo transport, calling for his master Qui-Gon, but the ship soon arrives at it's destination, Mapuzo, and he and Leia slip off and head to the co-ordinates they were given by the fake Jedi. There they find nothing, so Obi-Wan decides to leave, but instead of walking, Leia flags down a transport speeder for a ride. This cargo speeder is piloted by a Mole alien called Freck, and as they board it, Obi-Wan notices it is emblazoned with the Imperial symbol.
At the Citadel Inquisitorius the Third Sister orders the other Inquisitors around, as she has authority derived from Vader, but the more senior members are unhappy with this, seeing the Grand Inquisitors role as more naturally theirs, but they dispatch Probe Droids to locate Obi-Wan.
The Speeder stops to pick up some Stormtroopers, who question Obi-Wan and Leia, and although they stumble over their cover story, Obi-Wan manages to cover for it, but Leia thinks there is something more to the story he weaves. After the Stormtroopers disembark, Leia has realised that Obi-Wan knew her mother, and asks him if he is actually her real father, to wish Obi-Wan tells her he wishes he was.
The speeder pulls up to a sentry post, and Freck tells them he will deal with it, but he tells the Stormtroopers they might want to question his passengers.
They are questioned, but when a Probe droid arrives to scan Obi-Wans face, he destroys it with a blaster, and kills the Stormtroopers including one who attempts to use Leia as a shield.
A speeder carrying more Stormtroopers arrives, and Leia and Obi-Wan are ordered to lie down, which they relucantly do, but after some blaster fire, they discover the Stormtroopers have been gunned down by their officer, Tala Durith.
She reveals that she is a member of an underground movement which smugglers Jedi to safety, and she takes them to a camp where she will find them transport offworld, hiding them in a chamber behind a Droid repair shop manned by a mute loader droid which Leia is polite to.
In the chamber there is graffiti scratched into the walls of the various Jedi who have passed through, and Obi-Wan finds that Quinlan Vos has been through here.
Outside the Inquisitors arrive, having been summoned by the scan the Probe Droid performed, and the Third Sister is told that Vader has been informed by the Fifth Brother, but she claims she will still get credit for capturing Obi-Wan.
As Tala, Obi-Wan and Leia prepare to leave for the spaceport through tunnels, Obi-Wan senses something and along with the Stormtroopers and Inquisitors searching for them, he spots Vader, who begins walking along the street slaughtering the people using the force, snapping necks and brutally murdering everyone there.
Obi-Wan sends Tala and Leia ahead, before trying to draw Vader away from the settlement, ending up confronting him in a quarry, Vader ignites his lightsaber, but Obi-Wan flees.
Still searching the settlement, the 3rd Sister finds the hidden room, and the tunnel leading from it, and Tala sends Leia ahead, while heading off to help Obi-Wan herself.
Obi-Wan heads through the quarry, hunted by Vader, who emerges from the shadows and swings his lightsaber. Igniting his own, Obi-Wan is out of practice and unprepared, an easy target for Vader, who causes a container of flammable rocks to spill, igniting them he disarms Obi-Wan, and uses the force to drag him into the fire, as once he himself had burnt on the rocks of mustafar.
Tala shoots at Vader and the Stormtroopers who come to support him, providing cover for the Loading Droid to enter the fire and rescue Obi-Wan. Meanwhile Leia arrives at the rendezvous, only to discover the 3rd Sister has killed the contact and is trying to capture her, but Leia flees. . . .

High Points : A very tense episode, from the speeder ride with the Stormtroopers, to them being hunted through the settlement, this episode is edge of your seat stuff throughout. And in addition to this overall tension there are some wonderful moments, from Leia asking Obi-Wan if he is her father and the regret he shows that he is not. Through to the fight at the sentry post, where one of the Stormtroopers is cut in half by the laser gate blocking the road, a fantastic blaster fight and a brutal moment.
Speaking of brutal, Vader gets one of his best moments, as he stalks down the street of the settlement, indiscriminately killing anyone, there to draw Obi-Wan out, knowing that the murder of innocents, including children will make the Jedi hunt himself as the Grand Inquisitor pointed out in the first episode of this series.
I also really liked Feck as a character, friendly, helpful, and totally loyal to the Empire. Not a bad guy, just an ordinary guy who believes that the Empire is bringing safety and security to the galaxy, and anyone who is against that is obviously the bad guys.

Low Points : Without seeing the rest of the season, I can't really say whether this is a low point really, but I do feel as if the Vader - Obi-Wan fight has come a little early in the season. We're only at the halfway point, but it feels to me that we can't have these characters come up against one another too often, otherwise their final fight on the Death Star loses its impact. In fact, I actually thought that they would never actually meet in this entire series.
Given the usual format for a heroic story, the hero gets beaten and to their lowest point halfway through the story, before reigning triumphant by the end due them training or more likely learning something about themself. But that cannot happen in this series, Obi-Wan cannot beat Vader without totally changing the first Star Wars movie.

So what do you really think ? : I really enjoyed this episode, although once again I can't say whether it was slightly more or less than the previous two. It really feels like Star Wars, and while there are certain parts I can't see the use for yet (the 3rd Sisters politicking seems pretty irrelevant to the plot), I'm enjoying the whole thing.

Final Words : Now, I just criticised something about the 3rd Sister, and apparently there has been a lot of absolutely vile hate spewing at the actress portraying the character.
None of my criticism is directed at her, the actress is doing a fine job, and the colour of her skin is completely irrelevant. So as I've said about anyone with any of this kind of hate in their soul, they can just shut up.
My problem with the character is as stated above that her political wrangling for power seems pointless so far, she's not going to replace Vader, and he's the antagonist in this story by this point. It would be like if we saw Admiral Motti and General Tagge fighting for credit for capturing Leia in A New Hope, something totally unnecessary.
But we shall see how that develops, as the comment about The Grand Inquisitor being "incapacitated" I found interesting, as it hints that he is not dead (which makes sense since we see him later in the timeline in Rebels), so her attack on him and political wrangling may be important later on and lead to her downfall.
I also found myself questioning that all of the other Inquisitors have signs of Dark Side influence, most visibly the "Sith Eyes", but the 3rd Sister looks totally normal. But my son pointed out, that Count Dooku didn't show any signs of Dark Side influence, as didn't Palpatine until he caught some Force Lightning to the face. So her appearance is totally within canon, so I've just had to readjust my expectations.