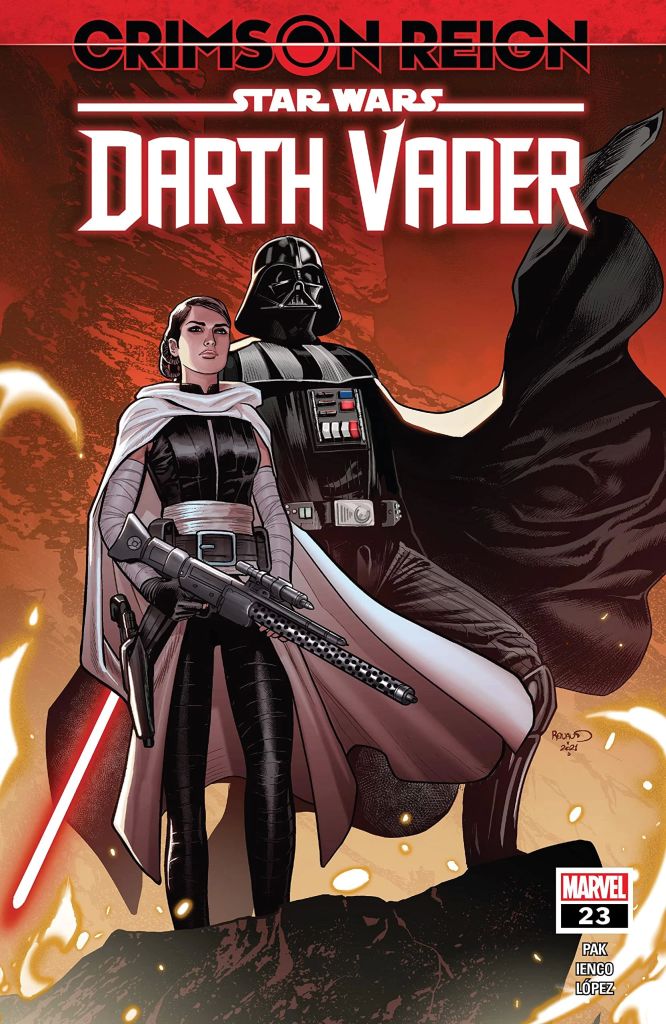 What is it ? : Sabe reveals her logic behind her declaration that she knows Vader was Anakin Skywalker, that Skywalker disappeared at the same time that Vader appeared. The they share an interest in order, and that she saw his concern over the cause of Padme's death. She also witnessed the recording on Polis Massa that she still saw good in him, combined with the fact that he has never killed her.
She then tells him that she worked with Padme on fulfilling one of Anakin wishes, to free the slaves on Tattoine, after the death of Shmi Skywalker, she and Padme helped many slaves leave the planet, and now a settlement of these freed slaves is now in danger from an Imperial Governor involved with Crimson Dawn.
He tells her that getting him involved will lead her on a path, but it must be of her own choosing and she is responsible for where it takes her.
Vader and Sabe depart and leave Ochi of Bestoon and Vaders other forces behind, Valance comments that they should return to his ship and wait for their next mission, but Ochi decides to take matters into his own hands rather than wait for instructions, leaving in a Tie Fighter.
Arriving i orbit around Gabrodor 3 in Vaders shuttle, they see an Imperial Star Destroyer in orbit, and Sabe calls for Vader to call in his own vessel and end this in one blow. But Vader wants to see the colony to see if she has told him the truth.
Arriving they are met by armed colonists, but they just act with confusion when they see that Sabe is aboard.
Vader gets Zed-6-7 to download and examine the colonies records, and he confirms that colonists have been taken by the Governor and never returned, and that promised supplies were never delivered. They tried to let Sabe know, but outgoing communications are blocked, and they had no ship, although Zed-6-7 points to a vehicle and asks about it.
They comment it is a homage to the pod racers they used to see on Tatooine, but it's purely terrestrial, Vader questions the two who built the vehicle, and discovers that it's Kit, and the Rodian, Wald, childhood friends of Anakin's, and he declares they can do nothing for him.
Vader then questions Zed-6-7 about the forest that surrounds the settlement, as he senses that the land is "disturbed", and the settlers tell him there has been a drought, when creatures attack.
They fight back against the creatures, but the settlers are being overwhelmed, only for them to be rescued by Vader, thanking him later as "Lord Vader".
Vader tells Sabe that although she thinks she is ready, she is not, as the colonists disobeyed her orders. Another shuttle arrives, and Sabe boards it finding inside it is a fully equipped armory, and she emerges armed and armoured. . . .

High Points : I'm torn over the appearance of Kit and Wald, as it feels just a bit gratuitous, but it is done very well. The way these friends who teased Anakin when he was a child end up addressing and thanking him as "Lord" Vader is telling of the man he has grown into. It does also make a lot of sense that among the people that Padme would have tried to rescue from slavery were the children she'd seen playing with Anakin when he was young. That her wish to fulfill his childhood dream of freeing slaves, and remembered his friends, when he bothered with neither when he achieved the power to do both.

Low Points : The story feels like it's treading water, lots of vague hints from Vader that Sabe must choose her own path, and be responsible for where it takes her. But really, she's been a member of a secret vengeance society for around 20 years (the Amidalans) before getting them all slaughtered, and more recently a member of Crimson Dawn, before betraying them for her own purposes. She isn't a particularly nice person, and I really don't see where this path will lead her where she hasn't gone already.

And as mentioned above, Kit and Wald's appearance seems a bit gratuitous, and the fact that Vader only recognizes them because they built a Pod Racer is just hammering it home.

So what do you really think ? : It really feels like the story isn't going anywhere at the moment, although plenty is happening. Remembering we're in the time between Empire Strikes Back and Return of the Jedi, there's not loads of time for things to be happening, but here we've got Vader running around recruiting one of Padme's handmaidens as some kind of new assassin, trying to bring down Crimson Dawn, all while Han is being transported to Tatooine. This series really should have a feeling of tension, with time being limited before Vader is sent to the Death Star 2 to complete it's construction. But instead the story just keeps padding itself out.

Final Words : Everything looks pretty, and whats there is really well written, but the story really doesn't strike me as important. It doesn't matter what Crimson Dawn does, and it doesn't matter what Vader, Palpatine, Sabe, or anyone else does to bring down Crimson Dawn. Fairly soon Vader and Palpatine will die, and the Rebellion will win, with the New Republic taking the Empires place, and hopefully being less prone to bribery and corruption (actually that's a far more interesting tale to me, how the heroes win, but almost immediately their efforts are corrupted from within by Crimson Dawn. So in places people see no difference between Luke, Leia, Mon Mothma, and Han, than they did with Vader and Palpatine, as the slavery, corruption and crime continues within the government).