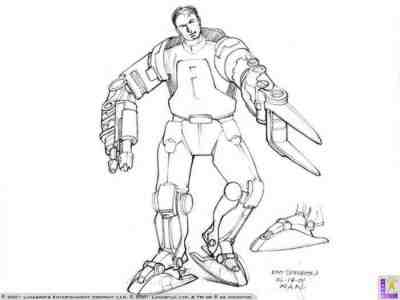 Description: The Agima-Tempest Powered Battle Suit is a set of combat armour originally designed by the Agima Corporation, but later built in bulk by Galactech after a buyout of the smaller company. Agima-Tempest Armour is a powered suit with every movement of the user amplified by servomotors, and although is heavy is not heavily armoured. This is because the Agima-Tempest Armour makes up for it by the inbuilt weaponry, including a Repeating Blaster, a Ion Cannon and a Claw which can be used to lethal effect in Melee Combat. The Massive strength of the suit also helps the users efficiency in a Brawl, smashing through targets defences and crushing opponents. Although heavily restricted, and fairly expensive, the Agima-Tempest Armour has sold well, with many bounty hunters purchasing sets, although extra armour plating is usually the first modification made, the Ion Cannon capability making this suit very useful in operations against other powersuit using opponents.