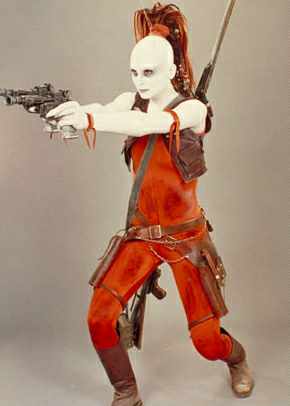 SPECIAL ABILITIES
Rhen-Orm Biocomputer: This is a detection implant placed in her skull by the Anzati, which makes it easier to track her prey. The number of Force points a character has acts as a bonus on Aurra Sing’s ability to track them with a Survival check.

These are the known powers Aurra Sing possessed and it is believed that she had access to other powers.


Pain, death and vengeance have been constants in Aurra Sing's life. Had she benefited from a better upbringing, perhaps she may have grown to be one of the greatest of the Jedi order. Instead, she became one its deadliest scourges. As with all Jedi hopefuls, Aurra's Force-potential was discovered when she was an infant. Being raised on the mean streets of Nar Shaddaa's vertical cities, Aurra's species is unknown, and her mother was a spice-addled reprobate named Aunuanna. The mysterious Jedi known as the Dark Woman took custody of Aurra, spiriting her away to Coruscant to begin her initiation into the Jedi way, taking her far from the dark decay of the Smuggler's Moon.

Aurra was a difficult, headstrong student. She displayed a cunning instinct and deadly reflexes, but lacked the control needed to fully master the Force. The Jedi Council hoped that the Dark Woman could tame Aurra's aggressive instincts. Some of her fellow students even branded Aurra with the nickname "Nashtah," after the deadly six-legged Dravian hound.

Aurra and the Dark Woman never established the bond that the Council had hoped for. While on a trip to Ord Namurt, Aurra was kidnapped by star pirates, who fed her lies regarding the Jedi. The lies played well to Aurra's natural fears of abandonment and betrayal. At the tender age of nine, she turned her back on the Jedi order, not even having achieved the rank of a Padawan learner.

The life of a pirate agreed with Sing, as she was able to focus her aggression. She learned martial and hunting skills while living on the fringe. Ill fortune caught up with Sing when a Hutt crime lord took her captive. Wanting her turned into a deadly assassin, the Hutt apprenticed Sing to a group of vampiric Anzati. Aurra underwent a transformation, stripping away any vestiges of compassion she had left. She emerged from her training a deadly, remorseless killer, seeking revenge for all who had wronged her in the past. The Anzati even affixed her with a Rhen-Orm biocomputer sensor implant, which not only increased her situational awareness, but also transmitted a simulated sensation of the fear the Anzati preyed upon.

Aurra became an independent bounty hunter specializing in Jedi hunts. She collected at least six lightsabers from her fallen foes as grim trophies, and brandished her own scarlet-bladed Jedi weapon. She armed herself with twin blaster pistols and a long projectile rifle. For her primary surface conveyance, Sing relied upon an outdated but highly modified swoop.

Aurra continued to kill Jedi as the Republic began to decay and crumble around her. A'Sharad Hett, Peerce and J'Mikel were but three of the Jedi she murdered. She had longed to track down the Dark Woman and exact vengeance for what she viewed as betrayal. Sing had her chance during the Clone Wars.

With her loyalties determined by her own vendettas and the highest bidder, Aurra Sing found easy employ in the chaos of the Clone Wars. She worked for Count Dooku, seeking the young Boba Fett for information the clone child possessed. When she learned that young Fett was heir to a fortune, she disregarded the original bounty mission, and tried to get Jango Fett's treasure for herself. She took the boy to Aargau, home of the riches, where young Boba was able to escape from Aurra in the labyrinthine interior of the banking planet.

When Aurra was hired to assassinate a Senator on Devaron, a team of Jedi was sent to investigate. Among them, the Dark Woman. Aurra sprang a trap on her former master, pinning the Dark Woman and the Jedi Master Tholme in a cave explosion. The remaining Jedi, Aayla Secura, tracked down Aurra and confronted her. What followed was a fierce duel between the two women. The fight was nearly a draw, until Aayla goaded Aurra, piercing through her icy façade to describe the wounded, lonely, abandoned child within. Aurra attacked ferociously, but Aayla bested her.

True to her Jedi heritage, Aayla did not needlessly take Aurra's life. She instead scarred her with her blade, and severed the Rhen-Orm biocomputer antenna. Stunned, Aurra was easily taken into custody, and sent to the prisons of Oovo IV.

History is vague as to the Sing's fate, as the growing galactic strife eclipsed her from public notice. Aurra Sing disappeared for years. Some report that she resurfaced during the Galactic Civil War as a combatant in Jabba the Hutt's demolition contests.


Page designed in Notepad, logo`s done on Personal Paint on the Amiga.
Stats by K. Descriptive Text and Image is from StarWars.com, copyright resides with LucasArts.
Any complaints, writs for copyright abuse, etc should be addressed to the Webmaster FreddyB.