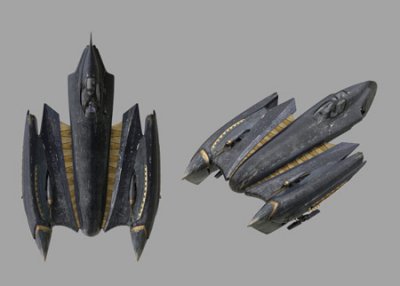 Description: While General Grievous commands entire fleets of massive capital vessels including his flagship Trade Federation cruiser, such spacefaring titans are impractical when it comes to planet- bound campaigns. For solo transit into a planetary atmosphere, Grievous pilots an overpowered starfighter that, like his robotic skeleton, combines sleek curves and an aggressive silhouette that suits his vanity.

During the Utapau campaign, Grievous kept his starfighter docked on a secret landing platform reserved solely for him. As he attempted to flee the planet when clone forces attacked, Grievous used his wheel bike to speed towards his hidden platform, but a tenacious Jedi general, Obi-Wan Kenobi, dogged his every step. The two sparred on the platform, as Kenobi tried valiantly to prevent Grievous from escaping yet again.

Kenobi managed to kill Grievous, and abscond with his starfighter. He used the fighter's communications system to transmit an emergency 9-13 Jedi distress code after the catastrophe of Order 66, and piloted the starfighter to rendezvous with Bail Organa.

Grievous' fighter was a battle-worn and modified Belbullab-22. It was developed by Feethan Ottraw Scalable Assemblies, the same Techno Union design firm that minted the Mankvim-814. It carried two rapid-firing triple laser cannons that quickly cool and cycle energy, giving the ship a devastating fire-rate.

Ships of this size and vintage don't ordinarily have a hyperdrive, but Grievous needed to stay mobile within an interstellar scale. Unlike the smaller Jedi starfighters that must link to an external docking ring to achieve superluminal velocities, Grievous' fighter contained a cutting edge lightspeed engine. Flanking the ship's main hull were forward mounted ion engines that incorporated lateral thrust ducts for maneuvering. A rear-mounted thrust vectoring fin also served to increase the ship's agility.

For Grievous' need to keep in touch with the Separatist forces under his command, the small fighter contained a compact HoloNet transceiver, allowing him to patch into legitimate and pirate "shadowfeed" networks.


Page designed in Notepad, logo`s done on Personal Paint on the Amiga.
Descriptive Text from StarWars.com. Stats by FreddyB. Image copyright resides with Lucasfilm.
Any complaints, writs for copyright abuse, etc should be addressed to the Webmaster FreddyB.