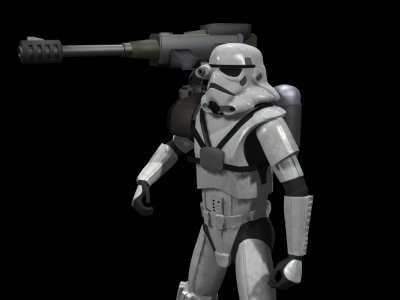 
Description: Although the E-Web heavy repeating blaster served the Empire well as a powerful support weapon for their forces, one criticism always leveled at the weapon was its lack of mobility. The time it took to set up combined with its bulky power pack and two man crew made it vulnerable to mobile enemy forces, therefore a need existed to make a more mobile version of this weapon to allow Imperial forces to manuever as battle conditions required during the Galactic Civil War. The E-5000 was the culmination of this work, a shoulder mounted weapon using the same focusing and discharge elements as the E-Web, but contained in a man portable weapon. The smaller a lighter weapon also meant that a smaller generator system was incorporated into the design, and capacitors needed to build up the power for each shot slowing the fire rate. The E-5000 was not introduced into Imperial service until shortly after the Battle of Endor, and the lessened resources of the Empire meant that the weapon never saw large scale use, although was deployed to certain key units throughout Imperial controlled space.