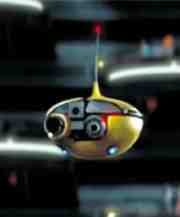 Description: This droid from Arakyd, who later became famous for their Imperial Probe Droids, has been in production for many decades, and is used for visual and audio recording and transmission. They were most famously used in the Republic Senate, but have also been used for many decades by broadcast stations for recording both inside and outside programmes, useful in helping lone reporters and for sweeping visual shots above and around locations. Because they may be used for recording in war conditions, these droids have some evasion abilities, allowing they to try to avoid incoming fire, however they are fairy obvious and have no ability to hide or sneak beyond simply becoming inactive. These droids are fairly simplistic in their intelligence, but although they only speak in droid speak, they can develop complex personalities, and many journalists wouldn't work with any other of these droids except their own. Still popular enough to continue production, these droids are a simple source of money for Arakyd, and are the only thing stopping the corporation from slipping completely into Imperial military production.