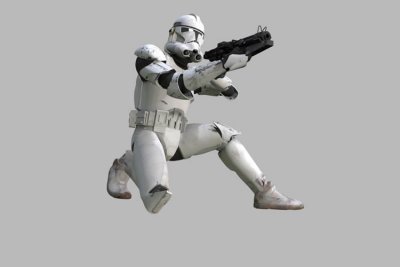 
At the time of their introduction, the Republic clone trooper represented the future of galactic warfare. Far superior to the battle droid armies of the era, the clone troopers formed the backbone of the Republic's new military initiative that battled against the forces of the Confederacy of Independent Systems.

Identical in form, physical prowess, stamina and mental capacity, each of the first generations of clone trooper was grown in the cloning facilities of Tipoca City, on the storm- drenched world of Kamino. Within the hermetic confines of the secret facility, the politically ambivalent Kaminoans applied their mastery of genetic sciences to craft what they deemed the finest of clone armies.

The clone army was apparently commissioned by a Jedi, Sifo- Dyas, a decade previous to their introduction on the battlefield. The original source of genetic material was an extremely skilled bounty hunter named Jango Fett. Using his genetic code as a template, the Kaminoans carefully tampered with the material to produce clones with diminished independence and accelerated growth.

Growth acceleration is essential to the production of clones, otherwise it would take over two decades for a soldier to reach combat maturity. In a decade's time, the clones were constantly trained in fighting techniques, vehicular skills and battlefield tactics. Yet they still maintained a spark of independent and creative thinking, making them far more suited to handle unexpected turns of warfare than droids.

Clone troopers were fully encased in hard white armor, their identical faces concealed behind a t-shaped visor. Color-coded flashes on the armor denoted rank, with green troopers being sergeants, blue being lieutenants, red being captains, and yellow being commanders. The clones designated for command duty were specifically trained in that capacity.

During the increasing tensions of the Separatist crisis, Obi-Wan Kenobi discovered the secret clone army on Kamino. The Jedi Council was surprised to learn of its existence, and of the involvement of Sifo-Dyas. Nonetheless, when it became clear the Separatists were gearing for war, the clone army was desperately needed to protect the sanctity and stability of the Republic. The Supreme Chancellor was granted emergency powers, and as his first act, he activated the clone troopers as the grand army of the Republic.

On the barren plains of Geonosis, a major Separatist stronghold, the first battle of the Clone Wars erupted. The clone troopers, equipped with advanced armor and air support, stormed the Separatist forces, and cut through the battle droid ranks. Led into battle by Jedi commanders, the clone troopers secured the first victory of the war.

It would be a long and bloody conflict in the years to come, but the efficiency of the clone trooper infantry would be proven time and again on many scattered worlds.

The relentless battery of physical and mental training within such an accelerated lifetime could potentially drive a clone mad were it not for the highly structured and balanced development program instituted by the Kaminoans. Though care was taken to protect the clone psyche, the fully mature clone cannot be said to have a "normal" personality, as their identities are wholly shaped by military training and subservience to authority.

The Kaminoans are obsessed with order and control over variables, and carefully monitored the developing clones for any deviance in biochemistry. These statistical anomalies were smoothed over under the supervision of Kaminoan Chief Scientist Ko Sai through extra conditioning. The Kaminoans reconditioned an average of seven aberrant clones for every two hundred clones.

Mature clones resembled Jango Fett as he was in his 20s, with slight deviations that were a byproduct of accelerated growth in a sterile environment. Fett resided on Kamino, offering his martial expertise to advise in the training of his duplicates.

Clone trooper armor consists of 20 form-fitting plastoid-alloy composite plates sealed to a temperature-control body glove via magnatomic gription panels. Jango Fett's Mandalorian heritage influenced the design of the armor, as seen in the t-shaped visor plate. The Kaminoans aesthetic influence is also visible, in its stark coloration and detailing. As the Kaminoans are not fully versed in human ergonomics, the armor is uncomfortable to sit in, though future generations of the suit corrected this flaw. The clone trooper helmet includes a comlink and enhanced breath filter for combat in hostile environments.

The unique clone trooper identification number is embedded in each clone's DNA. The clones themselves have no physical markings indicating their unique identities. A special scanner incorporated into the clone trooper helmet identifies the trooper and this info is displayed on a tiny LED viewscreen incorporated in the back of the helmet. The information displayed on the helmet can also be transmitted to a central location so that combat commanders can "track" a battle.

With the exact same genome copied thousands of times across a battlefield, the use of clone infantry has been very beneficial to combat medicine. Treatment for clones is much easier compared to individuals of other species. The clones are all the same genome, so their body parts are literally interchangeable -- there is no worry about rejection syndrome, and many complicated procedures can be extensively standardized.

Page designed in Notepad, logo`s done on Personal Paint on the Amiga.
Descriptive Text from StarWars.com. Stats by FreddyB. Image is by LucasFilm, copyright resides with them.
Any complaints, writs for copyright abuse, etc should be addressed to the Webmaster FreddyB.