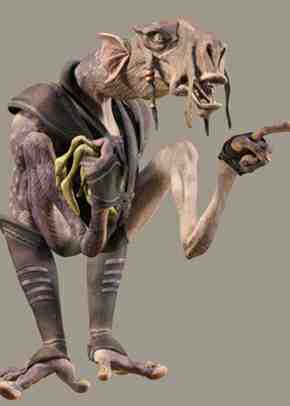 
Dugs are slender, powerfully-built beings with a somewhat humanoid build and a unique method of walking. Their strong arms are used as legs, and their lower limbs are used as arms. Dugs have smooth skin, which hangs loose and pouchy around their necks, fin-like ears, and pronounced snouts.

Dugs are known for their ill-tempered demeanor, and many are little more than bullying thugs. Diminutive Dugs often feel the need to throw around their strength in bids to establish dominance. One of the best known Dugs is Sebulba, a Podracing champion from Pixelito on Malastare.

The strong Dug physique comes from evolution on a high gravity world. On Malastare, the Dugs are arboreal beings, brachiating among the canopies with alarming speed. They have built primitive villages called tree thorps in the Malastare forests of the western continent.

Eight thousand years ago, the Galactic Republic established an outpost on Malastare as the planet is located at a key spot along the Hydian Way trade route. Following the Republic, a contingent of Gran colonists settled on the planet. First contact between the Gran and the Dugs was bloody, and a long, brutal war ensued.

The Republic settled the violence in the Gran's favor. The Dugs were demilitarized, stripped of political power, and pushed to the fringe of their own planet. The Gran rule Malastare and represent the planet in the Galactic Senate. Dugs are little more than subservient laborers toiling for the enrichment of the Gran.


Arboreal: Dugs are natural climbers living in treetop villages within their own society, this gives them a bonus +1D to Climbing/Jumping.


Aggressive: Dugs are bad-tempered by nature and take very little provocation to flying into a rage and attack, this leads to them being considered by many to be little more than animals.

Slaves: Dugs are little more than slaves for the Gran who claimed their homeworld many millenia ago, they are sold in slave markets across the galaxy, and even where this is considered illegal they are often tied into contracts which amount to little more than slavery. Their family structures have suffered due to children being sold off to far away worlds, something that has happened for so many generations that Dugs have difficulty in seeing that there is any other way to live, with servitude being almost a natural habit now.