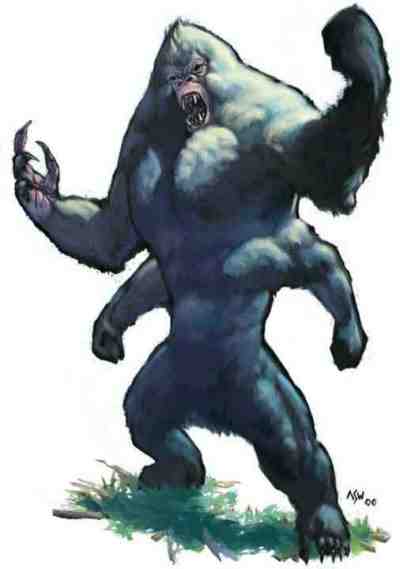 Description: Although Gorilions are herbivores, they are extremely territorial and will tear to pieces any creatures that penetrate their territory. Although these creatures have spread to a number of worlds, they are still only found in forested or jungle areas, usually in tropical weather conditions. They mate for life, and family groups remain close even after the cubs have grown to adulthood, forming simple groups of families consisting of up to 2 dozen members led by an alpha male. Although Gorilions can be extremely dangerous to those who accidentally stumble into their territory, they rarely stray from their claimed lands, so can actually co-exist with intelligent beings quite closely as long as they are allowed their own space. Various scientific attempts have been made to train and tame Gorilions, but they have failed due to the strong aggressive streak in their temperament, and although their pelts can fetch a small price, Gorilions are generally considered to be useless and not worth the effort of hunting, capturing or killing them.


Page designed in Notepad, logo`s done on Personal Paint on the Amiga.
Text completely by FreddyB. Image is from the Monster Manual and copyright resides with Wizards of the Coast.
Any complaints, writs for copyright abuse, etc should be addressed to the Webmaster FreddyB.