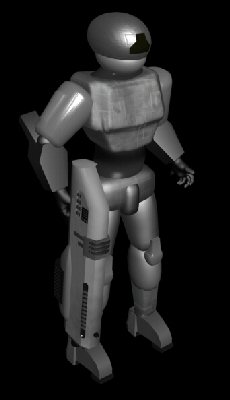 Infra Red Visual Enhancement:
Allows user to see into the Infra Red spectrum giving a bonus 1D to search tests in the dark.

Description: Griven Powered Armour is a heavy motorised set of personal armour used by Griven troopers, it has a built in air supply allowing it to be used as a space suit as well as terrestrial armour. The suit enhances the users strength allowing them to move heavy weights and inflict large amounts of damage to opponents, as well as providing the user with communications systems and visual enhancements. Although primative compared to some of the galaxies more advanced armour suits, the large number of these suits issued and their power in comparison to blast vests and Storm Trooper armour makes them a great advantage for Griven forces. The lack of any integral weapons, leaves the user reliant on normal Griven weaponry, but this does allow a certain flexibility in equipment, allowing the armour to be issued to ordinary infantry as well as special forces each customising their weapon load as required by role and circumstances. Although Griven armour is no-where near as advanced as Mandalorian armour, the fact that all Griven soldiers are equipped with it gives the same advantages that Mandalorian Armour offers to the soldiers of their armies.