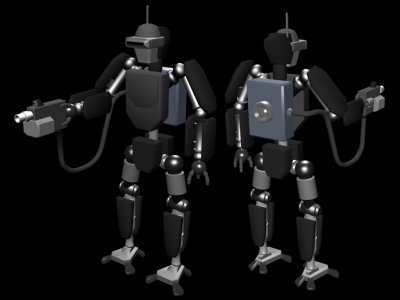 Description: The Griven Battle Droid is a combat droid designed to accompany Griven footsoldier into combat, with the most advanced artificial intelligence logic matrice that the Griven Empire can built the droid is a competant and dangerous opponent in combat. The droids are tough and armoured, and equipped with a powerful Blaster Rifle powered from a backpack generator and a commlink system so they can recieve orders and relay information back to their headquarters. These droids are used to patrol and secure territory for the Griven, and although competant at making judgements for themselves are designed to refer back to their control if uncertain about anything. Although expensive for the Griven Empire to produce, the effectiveness of this droid in combat has led to their production in massive numbers and their outnumbering Griven soldiers by almost 2 to 1.