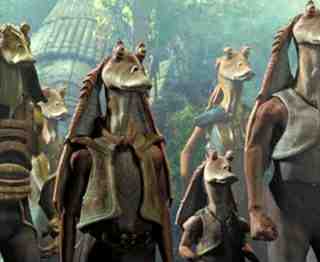 
The Gungans are the native inhabitants of the planet Naboo. They are an amphibious species with hardy lungs capable of holding breath for extended periods. As such, Gungans are as comfortable in water as they are on land.

While there are a number of different races, most Gungans exhibit the same physical traits. They tend to be tall and lanky humanoids.Their skeletal structure is extremely flexible, as it is made of cartilaginous material rather than hard bone. This makes their faces rather expressive, and makes their bodies more resistant to damage.

Gungans have strong leg muscles for swimming, and are aided by their long fin-like ears. Gungan arms end in four-fingered hands, and their feet have three stubby toes each. There isn't much visible physical difference between female and male Gungans. Females tend to be slightly smaller, with sleeker faces. They often tie their long ears back.

The long Gungan face has a tough yet flexible bill for burrowing and rooting out food. They have long muscular tongues with which they scoop mollusks and lesser amphibians from the Naboo swamps. Their teeth are large and blunt, capable of cracking through shellfish. Their large nostrils completely seal for underwater travel.

While most spacefarers would dismiss Gungans as primitives, they have developed an advanced, albeit unique, technology.They grow the basic structures of buildings, vehicles and technology and adorn them with artistic flourishes and organic lines. This gives Gungan technology a very fluid, non- rectilinear look.

The power source for Gungan technology is a mysterious blue- white energy "goo" that is mined in the depths of Naboo's oceans. The viscious plasmic material forms the basis of Gungan weaponry as well.

Despite mastering this bizarre technology, Gungans still employ beasts of burden for transportation. Their most common mount is the kaadu, a wingless reptilian avian which Gungans adorn with feathers and ride into combat. Other favored Gungan mounts include the large, stubborn falumpaset. For truly heavy loads, the Gungans have domesticated the fambaa, a nine-meter tall four-legged swamp lizard.

The Gungans are ruled by Boss Nass and his Rep Council, from the High Tower Board Room of Otoh Gunga. The Gungans have had an uneasy relationship with the Naboo, the human colonists on the planet. Many Naboo look down upon the Gungans, thinking them as primitive. The Gungans in turn try to avoid any contact with the surface-dwellers.

When the Trade Federation invaded Naboo, Boss Nass chose to remain uninvolved in the conflict. He felt the Gungan's isolation would keep them safe from what was ultimately a surface-dweller's problem. He was wrong. The Trade Federation armies stormed the swamps, and forced the Gungans to abandon Otoh Gunga.

The Gungans retreated to a sacred place within the Naboo swamps. There, Queen Amidala, the ruler of the Naboo, pleaded for Boss Nass's help. Stirred by her words, Nass agreed to join forces with the Naboo to rid the planet of the Trade Federation. The Grand Army waged an immense ground battle with the Trade Federation droid army, and many Gungans died in the fighting. Nonetheless, the Queen's forces and allies were able to capture the Trade Federation viceroy, and destroy the orbiting Droid Control Ship, thus freeing Naboo.

In the festivities that followed, Boss Nass shared a platform with Queen Amidala, and declared peace on Naboo. The two cultures that had long been divided by fear and prejudice would now forever be joined by a common understanding and love of their world.

The rift between the Gungan and Naboo people began at first contact, centuries ago. Though they've long had a fundamental failure to understand one another, it has never resulted in warfare.

There are at least two distinct Gungan races. The Otolla Gungan is characterized by a tall and lanky build, long ears (or haillu), inquisitive eyes atop short stalks, and a pronounced bill. The Ankura Gungan is an older race, with a stockier build, shorter bill and haillu, and hooded eyes. Gungans are hatched from eggs in water cradles, and are born as tadpoles. They quickly grow limbs and are able to walk on land within a standard month of hatching.

After signing an historic treaty with Queen Amidala, Boss Nass sought to end the isolation of the Gungans, and enter into the larger galaxy around them. The first issue he had to contend with was serious population problems with Otoh Gunga and other underwater cities. The Gungans have great reverance for nature and balance, and they did not want to overburden their native ecosystem. With the assistance of the Naboo, Boss Nass spearheaded a campaign for the Gungans to colonize the Naboo moon of Ohma-D'un.


Aquatic: Gungans are as at home in water as they are in air, capable of holding their breaths for extended periods while swimming, allowing them to remain submerged between breaths for many minutes. Although this does serve them some advantage in a vacuum, they have no resistance to the other deleterious effects that this environment has on their bodies.

Cartilaginous Body Structure: With very few bones, and most of their body supports made from flexible cartilage, Gungans are resistant to blunt trauma, resisting non-piercing physical damage with a bonus 2D. This offers no protection against projectile weapons, energy weapons or stabbing/slashing weapons such as knives or swords. However it does provide them with impressive resistance to concussion waves such as blast waves from grenades.


Mild Xenophobia: Centuries of persecution by humans has left Gungans with a mild dislike of non-Gungans, always trusting their own kind above aliens.

Infamous: Gungans are know across the galaxy as not only the major pivotal force in the Battle of Naboo, but also as the species which originally voted for Chancellor Palpatine to be granted unlimited powers which led to the establishment of the Galactic Empire. This leads to them being seen as either untrustworthy or extremely naive by other species.