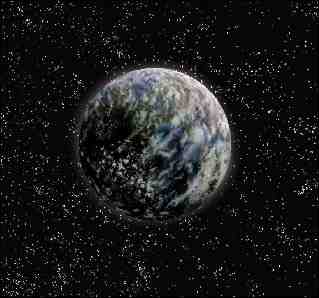 
Iloon is a small independant world which was colonised only a few thousand years ago, and exports a large amount of minerals making it somewhat of a boom world, with many colonists arriving to take advantage of the massive profits to be made here.

During days of the Old Republic, Iloon was too small to have its own representative in the Senate, and was represented by the Senator for Kothlis and sold much of its minerals through its close alliance with that planet. However this was an early stage for the planet, since many of the minerals its exports could be obtained from other more industrialised worlds. However as the Empire siezed control of the Galaxy, the pro-human policies of the Emperor meant that importing supplies from non-human governed worlds became unpopular with his regime, and Iloon entered its boom phase, but also lost its independance to direct imperial control. This was not popular with its inhabitants, and the Rebellion found some support with the original settlers, although the new colonists brought by the influx of Imperial money and resources mainly liked the influence the Empire was having on the world.

As the Empires policies took grip of the Galaxy, the enslavement of alien worlds meant that Iloon found itself once more on the sidelines, as slave labour meant that cheaper resources from other worlds made Iloons exports too expensive for the market to bear. The boom phase passed, and pro-rebel forces grew in support across the planet as even the newer settlers became discontented with Imperial rule.

After the fall of the Emperor, and the declaration of the New Republic, Iloon threw its support in with the newly born government. This has meant a new boom period for the world, which finds itself the source of most of the resources for the Republic, as strip mining and other destructive Imperial policies have ruined the worlds which once supplied the Republic. And although Iloon is still officially independant, the Republic has great influence here with many branches of the Republic government having local offices here, just as they do on official member worlds.

Iloon is a ringed world, and it is this ring which provides the resources that make Iloon such a success, with asteroid mining possible from the surface of the planet. This means that the vast resources usually only accessable through asteroid mining, can be done without the expence of permanent settlements, or vast mining vessels. Miners can shuttle up to orbit each day to work, and the minerals can be shuttled back down to the surface, for export. This lowers the costs significantly, and makes Iloon the cheapest supply for minerals and metals outside Imperial slave labour camps.

The capital city of Iloon is Gensis, a large sprawling city and like most cities on Iloon is free from the massive sky scrapers that populate more industrial worlds such as Kuat or Coruscant. The city gets its energy from massive solar energy farms which surround it, as do the several star port facilities used for the mining around the world, and its related export. Passenger vessels arriving at Iloon are expected to land at the main starport facility in the city itself, this facility is more familiar to interplanetary travellers than the massive stockyards that the cargo ports resemble.

There are a number of luxurious hotels which make most of their money from corporate representitives who are Iloon making deals with the government, however freighter crews can find more economical hotels around the starport, where a number of cantinas can also be found. The residential areas of the city are wide and open, with many play areas for children, and parks to take advantage of the warm summers of this temperate area. However winters are harsh, and speeders are widely used to avoid problems with ground vehicles even though there is a good road network which would normally provide good transit routes for ground vehicles. However due to the busy air traffic around the city, speeders are restricted to an altitude of 5 meters.


Page designed in Notepad, logo`s done on Personal Paint on the Amiga.
Text completely by FreddyB. Image is stolen from a web page I`ve now forgotten where, Copyright resides with the artist.
Any complaints, writs for copyright abuse, etc should be addressed to the Webmaster FreddyB.